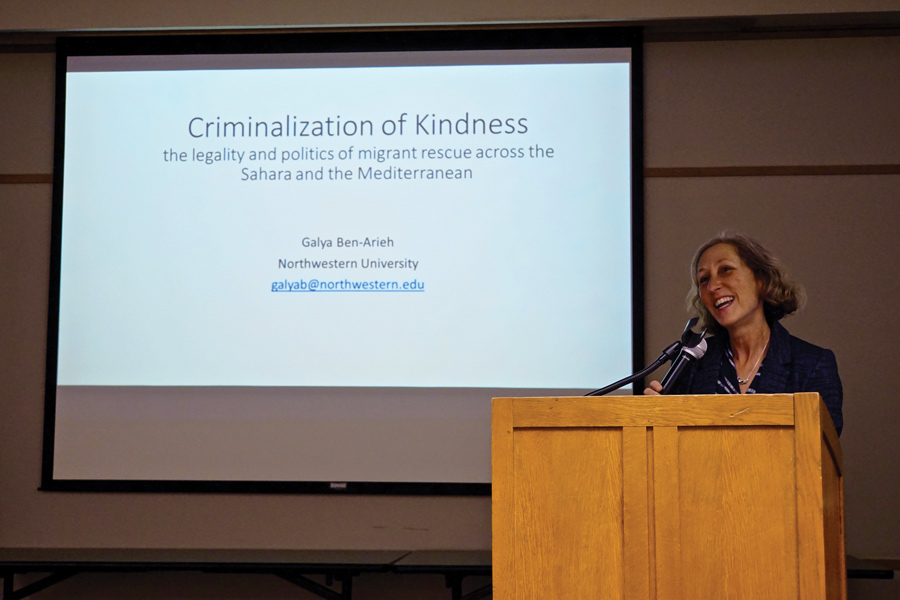 Political science Prof. Galya Ben-Arieh discussed how nations have been actively attempting to restrict citizens and NGOs from rescuing, accepting and aiding refugees during a Monday event.

Ben-Arieh gave a lecture at Evanston Public Library titled, “The Criminalization of Kindness: The Politics of Migrant Rescue.” She is a lawyer who founded and directed the Center for Forced Migration Studies, and she also teaches courses on refugee policy and constitutionalism.

She recently founded Community Partnerships for Settlement Strategies (COMPASS) in 2018, an organization that works with a small team and network of trusteed community partners to support four refugee families in Evanston.

Drawing on this experience, Ben-Arieh used the lecture as an opportunity to shed light on refugee policy and the criminalization of asylum seekers, specifically cases where regular citizens and NGOs have been discouraged in helping to accept refugees.

Ben-Arieh referenced her refugee work in Sicily, Italy to demonstrate how NGOs were harassed for helping to take in refugees.

“The NGOs that I had come to visit were being attacked,” said Ben-Arieh. “By 2017, widespread threats and intimidation both legal and physical reduced the presence of private rescuers to a single vessel.”

In another more specific example of the criminalization of refugee assistance, Ben-Arieh pointed to the story of French citizen Cédric Herrou, who made national headlines after being arrested and later acquitted in 2018 for helping more than 200 African migrants enter France illegally from Italy.

According to Ben-Arieh, the crux of the problem centers around the legal ambiguity associated with refugee status and the cycle of misunderstanding surrounding smuggling, a practice that can help refugees.

“(There is) a lot of misunderstanding between trafficking and smuggling,” said Ben-Arieh. “(When nations curtail smuggling) they are saying that we do not want to bring across people that are consenting to being moved.”

Instead of using the term “smuggling,” though, Ben-Arieh insists on re-orienting the discussion, centered around a “rescue narrative” where NGOs are required to assist refugees and acknowledge that migration is a part of history that will always exist. This narrative allows for mobility in establishing migrant flows for education and work.

Audience member John Adewoye, an immigrant himself who traveled from Nigeria in 1999, had actively been aiding and helping migrants across the world in settling them in Illinois.

“I have housed LGBTQ+ refugees that are fleeing in forced migration,” said Adewoye. “I help give these migrants a place to stay when they come here since these refugees have nothing when they come.”

Adewoye asked Ben-Arieh whether the U.S. government was aware of what to do to support asylum seekers. She said that the U.S. government is actually putting up more barriers to entry, and even recently created an office at the U.S. Department of Justice to denaturalize certain immigrants, including “war criminals, human rights violators, sex offenders and other fraudsters,” according to a news release.

Another audience member, Kevin Langson, decided to come and hear Ben-Arieh speak based on his admiration of her previous research, but said that he had not seen this specific angle of her work.

Langson said he came away feeling as though he had learned more about the ambiguities surrounding refugee policy.

“I learned things about the specific lulls in refugee policy and the role that lawyers play,” Langson said.