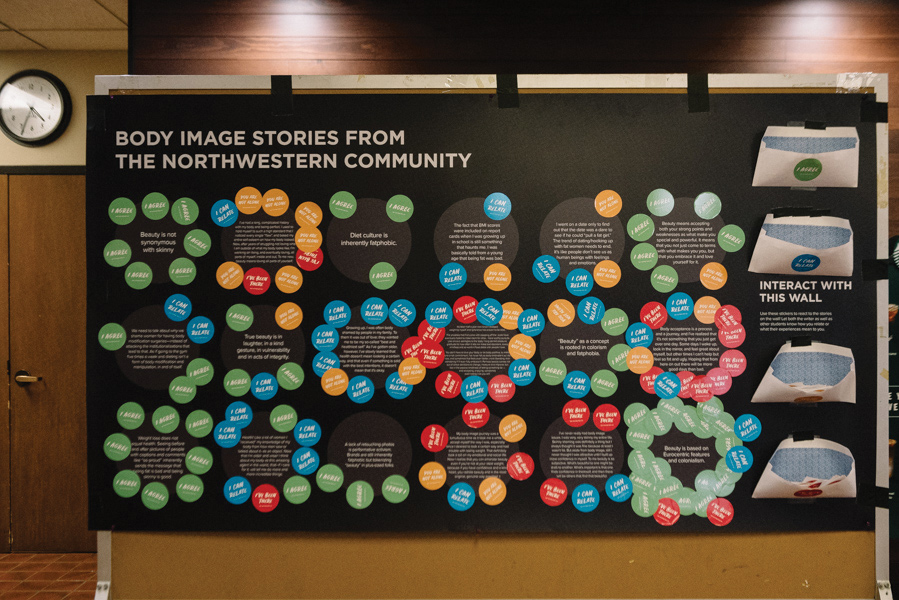 A board set up in Norris where students could share their body acceptance stories during Body Acceptance Week.

Last week was Northwestern’s Body Acceptance Week, an annual celebration full of events and educational resources about healthy relationships with food and one’s body. As part of that week, students reflected on the importance of body positivity and their experiences with it in college.

Oxnam came up with the idea for the blog when she was a senior at her boarding school and heard others in the halls speaking negatively about their bodies. She was also frustrated by the lack of knowledge of where to find plus-size clothing for young women and wanted to create a central location for those resources.

In her time thus far at Northwestern, Oxnam has had a range of experiences with body positivity, especially in Greek life.

“The first few frat parties are a little uncomfortable,” Oxnam said. “People are sharing clothes, and you’re like, ‘I can’t share clothes, everyone is in crop-tops,’” she said. “The style around party culture can feel really isolating to people who aren’t really comfortable in their bodies.”

She added, however, that her friends have been very supportive of her, and she has found a comfortable community in Greek life. Oxnam said she, and others, should do what makes them happy — which sometimes may be choosing not to enter spaces that make them feel uncomfortable. The online platform differs from a physical space like a club because it allows people to ask questions and walk away when they want to.

“It’s great when a place is already diverse; it’s hard to be that first person to step into the space and say, ‘I will suck it up and deal with it and push back,’” she said. “This site is like my way of doing that remotely.”

The online aspect of the blog also allows people to form a community no matter where they are, which was important to Oxnam because there may not always be more than one or two plus-size girls in some communities.

SESP freshman Emi Silverstein sees possible signs of pressure to conform to certain beauty standards, but feels people are generally supportive of promoting body acceptance. Silverstein said people who look a certain way are admired by some, but that few people would call someone out for not fitting certain standards.

She said there is a strong workout culture at NU, and many people do group fitness classes multiple times a week. Particularly, there is an expectation that girls will work out more and attempt to achieve beauty standards after a break-up.

“There’s a lot more to feeling good than working out and eating well,” she said.

Communication freshman Clay Lawhead said the general public has made a lot of progress in removing insensitive terminology around body image and promoting body acceptance, but there is still more to be done.

Lawhead said he often sees men who are more fit and muscular than he is in the media, prompting him to feel the need to work to attain that standard rather than accepting his own body.

“I can acknowledge people are beautiful no matter what standards they’re held up to, but myself, I don’t feel confident in myself,” he said.

Lawhead thinks the NU community could help support body positivity by hanging more posters around campus reminding people they are beautiful no matter what they look like.

“I’m not very muscular, and seeing men (in the media) who are more fit and have bigger arms and bigger legs, it makes me think ‘oh, let’s go to the gym, I can achieve that, and be beautiful,’ but it’s not all about the actual working out — it’s about seeing yourself as beautiful,” he said. “It’s not talked about (in) the media, internalizing what makes yourself beautiful.”