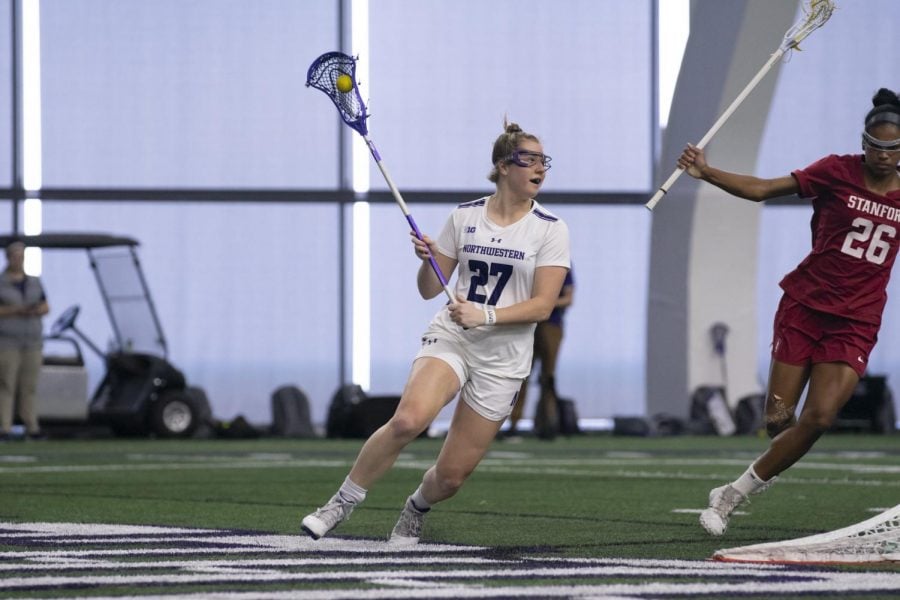 Izzy Scane makes a move. The sophomore finished with five goals in NU’s win over Stanford.

Entering Sunday’s matchup, Northwestern had won eight consecutive games against Stanford dating back to 2004. The No. 7 Wildcats continued that streak Sunday, defeating the Cardinal 25-18 at Ryan Fieldhouse.

NU (4-2) played most of the second half without one of their leading scorers, sophomore attacker Izzy Scane, who left the game with an apparent lower-body injury.

The Cats got off to a slow start, surrendering seven unanswered goals to Stanford (2-3) in the opening minutes. NU went over ten minutes without scoring during that period, falling behind 7-2.

But the Cats rallied to tie the game, closing out the first period on a 4-0 run that included two goals in the final 10 seconds of the half. Scane and junior attacker Lauren Gilbert, who entered the game tied for the team lead in goals, both netted three goals in the first half.

“I honestly feel so honored to be able to play with Izzy,” Gilbert said. ”Being able to play off each other on the field gives us both a ton of confidence.”

With the score even at 10, the Cardinal responded early in the second half, taking a quick two-goal lead. However, Stanford’s offense faltered, and it failed to score for over 10 minutes in the second.

NU took advantage, breaking off a 7-0 run of its own to go ahead 17-12. Scane scored twice more before being injured just inside the 16-minute mark. Despite not playing for nearly half the game, she finished with the team lead in shots, caused turnovers and ground balls.

After the Cardinal scored a couple goals to pull within three, the Cats broke off a 6-0 run to extend their lead and seal the game, eventually winning 25-18.

“I’m just really proud of our resilience today,” Gilbert said. “That’s just the mentality we need to have moving forward, and obviously the win feels good.”

NU benefitted from 31 Stanford fouls, several of which resulted in goals for the Cats. For comparison, NU only committed 16 fouls, and the Cardinal scored just one free position shot –- the Cats scored eight.

NU’s second half run was due largely in part to sophomore goalie Madison Doucette, who recorded eight saves on the day.

“We’re fighting for every play,” Doucette said. “If you’re (number) one, or if you’re unranked, we really don’t care, we’re going at it the same way.”

Next week, the Cats will face No. 1 North Carolina and conference foe No. 20 Penn State. They say they’ll look to get more wins for coach Amonte Hiller.

“It’s nice to be able to represent her,” Doucette said. “We just hope to keep it rolling. Three hundred is not where we’re stopping.”