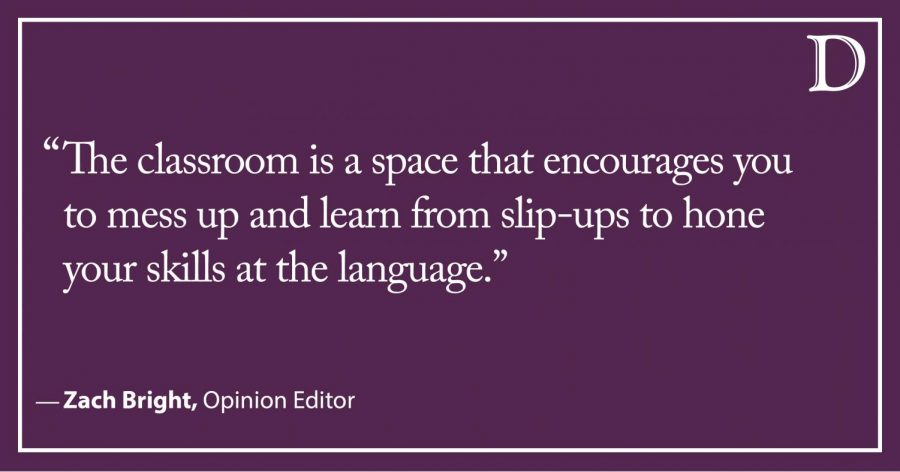 If there’s one thing I wish I had all the resources, time and energy to devote to, it would be learning another language. Duolingo is great and I wish I took more advantage of it, but I’m talking about really immersing myself in another language.

In high school, I was fortunate enough to have the chance to learn Chinese. After learning up to the AP level, I taught the language to other high school students as a peer mentor at a summer immersion program. For two weeks, we only spoke Chinese. While I don’t quite have the abilities of a native-speaker, the experience really helped me solidify my skills.

With Chinese under my belt, I was able to test out of my foreign language requirement, so the thought of diving into another language at Northwestern didn’t cross my mind until last winter. I got interested in learning Japanese because it’s so different from a language like English. A few summers ago, I tried to learn the language with a friend from my hometown, but we really didn’t make much headway. So starting my sophomore year I actually began learning Japanese.

Japanese is my most entertaining class and probably my favorite. Similar to the program I once taught at, the class is conducted almost entirely in Japanese. This requires you to engross yourself in the language, making acquiring the language more practical but also more fun.

That by no means implies that I’m particularly good at picking up the language. The classroom is a space that encourages you to mess up and learn from slip-ups to hone your skills at the language. Everyone in the class in one way or another has messed up, and each time we take it with positivity and good humor.

The many, many mistakes I make do reflect themselves in my grades. But it’s the best way to actually improve and actually teaches me. It’s an environment that enables me to be less concerned with my academic success and focus on learning the language.

It helps build soft skills that are hard to replicate in another classroom setting. Patience comes from struggling to string together sentences, whether in speaking or in writing. It comes from becoming familiar with new grammar structures and quirks of the language. In some way, language acquisition shows you a different way of thinking.

Japanese certainly isn’t my first language and hopefully won’t be my last.

Zach Bright is a Medill sophomore. He can be contacted at [email protected] If you would like to respond publicly to this op-ed, send a Letter to the Editor to [email protected] The views expressed in this piece do not necessarily reflect the views of all staff members of The Daily Northwestern.