Borrok: How we should think about welfare 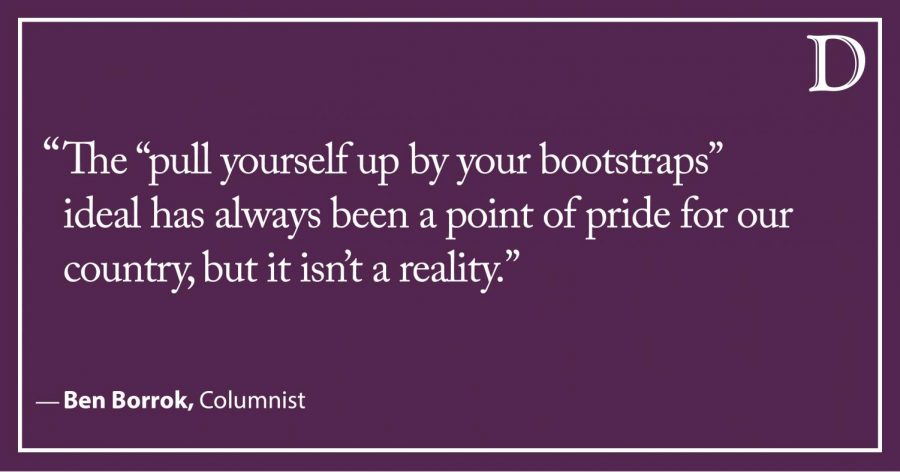 I came across a tweet last week that posed the following thought experiment: If public school bussing didn’t exist, and it was proposed this year as a new policy proposal, would it pass? I was taken aback because my initial response, made without much thought, was that it would obviously pass. What would we do without buses? But as I considered the question a bit more, I realized that the answer wasn’t so simple.

More likely than not, public bussing wouldn’t pass — at least, not the system we currently have. The questions that would kill it mirror those asked when considering other initiatives. Why should I have to pay for your child’s ride to school? What kind of family can’t ensure transportation for their family? What about families with cars? How will we pay for it?

These questions should sound familiar, as they seem to pop up every time a new welfare proposal appears. With the 2020 election focused on initiatives such as universal healthcare and tuition-free college, it is important that they are contextualized before dismissing them. Welfare isn’t as black and white as cable news and Twitter pundits make it out to be.

Everyone relies on welfare in some form or another, whether it’s going to a public library or school, or having a relative on Medicare. We take these services for granted today, but they were once considered radical ideas. Regardless of this, radical ideas today are never considered through the lens of the future.

The simple explanation for this is in America’s rugged individualism that seeps into every conversation about society. The “pull yourself up by your bootstraps” ideal has always been a point of pride for our country, but it isn’t a reality. Study after study indicates that economic mobility in the United States is virtually non-existent. The wealth you are born into is highly likely to be the amount of wealth you are able to ascertain. In short, it means dreams of reaching wealthy status require assistance to even the playing field.

In the case of public school bussing, students who took the bus were less likely to be absent, which in turn enables them to succeed in school. The link between education and success in life is undeniable, and increased accessibility only serves to strengthen the notion that graduation is within reach for everyone.

Just like bussing, the notion and need for libraries has never been questioned. Once we become acquainted with social programs, we tend to take full advantage of them for the betterment of our lives. Despite this, the same arguments and fictional fears seem to plague our decision making.

We find ourselves in a quagmire in terms of how we proceed in the current election. The precarious situations millions of Americans find themselves in seem to go unrecognized, despite decades of evidence. For instance, with healthcare costs spiralling out of control, a medical emergency would send a majority into financial ruin. It is unfair that something so far removed from our own control could dictate the rest of our lives.

When it comes to building war machines or tax cuts for the rich, we don’t question how we’ll pay for it. Each year, these initiatives eat into our budget and deplete key social programs so how can we be surprised about the decline in quality of life for many Americans? Budget cuts proposed in 2018 hit low-income families hard, slashing housing services and other assistance.

It is tiring to act like we are all above help, that we can’t enjoy the wide array of freedoms and securities that other developed nations enjoy. Instead of continuing our mindless spending on war, we can redistribute funds in a way that provides genuine social benefit to the American people.

We seem to be prisoners to our own antiquated mindset, the effect of Cold War messaging has paralyzed many into thinking that healthcare isn’t a human right or that it is acceptable to put ourselves in debt to attain a degree that is now seen as a requirement of the working world. What do we have to lose from a healthier and more educated population? Think of the economic benefits from a population that isn’t chained to massive debts and systemic poverty. The arguments regarding costs are perpetuated by the billionaires who also serve as the only people to benefit from the current situation.

We don’t need middlemen and corporations making money off our fundamental needs. Welfare has always been a fight between an old-fashioned idea of personal responsibility coupled with the uncertain situation many of us live in. At some point, the wall has to come down. However, the fight won’t be complete unless we step outside of ourselves and look at society through a wider lens. The next time you face a conversation about welfare, think about all the ways you already benefit.