Men’s Basketball: Northwestern takes step in the right direction in loss to Illinois 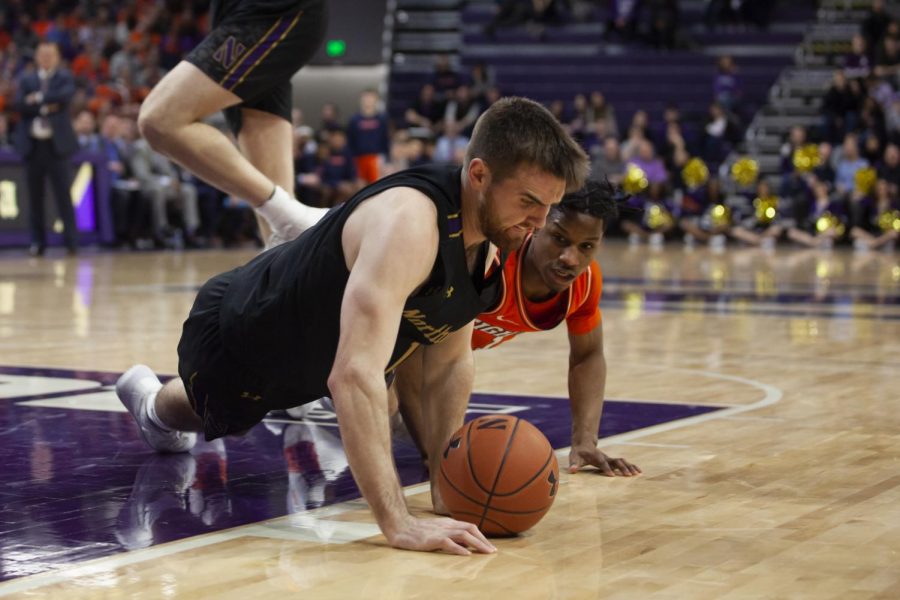 After Northwestern lost to Minnesota by 26 points last Sunday, coach Chris Collins admitted he was worried about the future.

At that point, the Wildcats had lost 11 straight games with two weeks left in the regular season. Collins said his biggest concern was the team looking ahead to the end of the season, and he addressed that in a team meeting Tuesday.

“We met about how we wanted to finish this thing out,” Collins said. “We wanted to continue to show growth. We wanted to fight and try to find a way to find a few wins if we could along the way, but also set ourselves up for the future.”

Against Illinois on Thursday, NU showed the fight Collins said he was looking for. The Cats (6-21, 1-16 Big Ten) lost 74-66 to the Fighting Illini (19-9, 11-6). But coming off one of NU’s worst losses of the season, Collins said he was proud to see the team play so competitively against a team tied for second-place team in the Big Ten standings.

“This team has really fought,” he said. “They pick themselves off the mat, they come back and have good attitudes and keep working. They’ve stayed together, and it’s not an easy thing.”

Illinois center Kofi Cockburn led the team to a 13-point lead in the first half, but NU cut the deficit back to 5 points early after the break.

Then after Fighting Illini reserve guard Alan Griffin caught fire in the second half to give Illinois a 16-point lead with six minutes left, the Cats pulled within 7 points and had a chance down the stretch.

“When we got down (16) points, we could have laid down,” Collins said. “But we didn’t. We kept fighting, cut it to seven. We played until the end, and that’s all that I’m asking.”

Sunday’s 8-point loss to the Fighting Illini was the Cats’ closest game in almost three weeks. NU hasn’t gone down to the wire with an opponent since the team’s overtime loss to Rutgers on Feb. 9.

But the Cats will have a better chance at a win against Nebraska on Sunday. The Cornhuskers (7-21, 2-15) have a one game lead over NU in the race for last place in the conference.

“Whether people think it is or not, that’s a big one for us,” grad transfer guard Pat Spencer said. “We know what that means for the standings. As a prideful group, we want to make sure we come out of that game with a win. We’re going to lock in these next few days and really grow from where we were at today.”