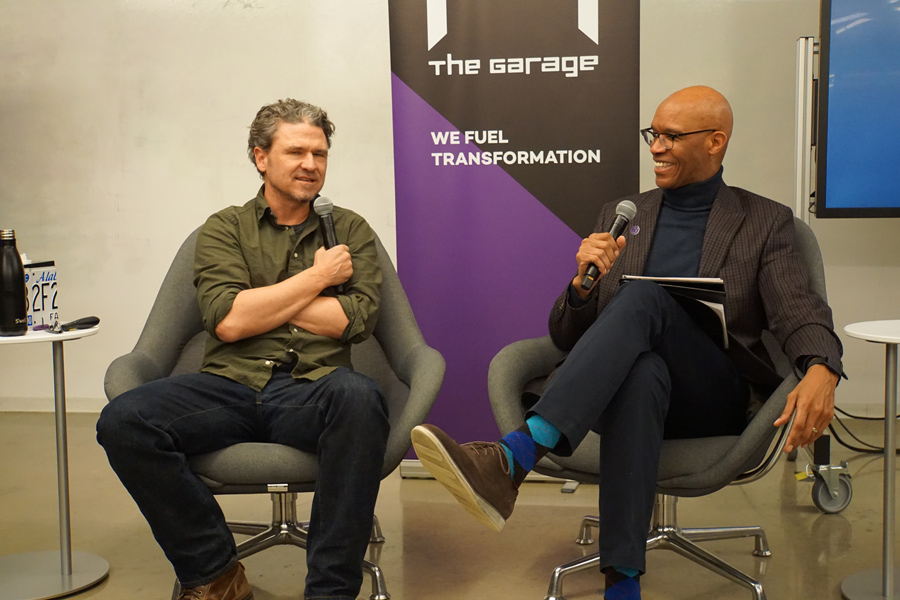 Author and entrepreneur Dave Eggers began his talk this Thursday at The Garage with a shoutout to his flip phone.

The San Francisco-based novelist, who said he abstains from smartphones and even home Wi-Fi, is a different kind of speaker than usual at Northwestern’s startup incubator. Eggers, however, is part of The Garage’s new effort to encourage entrepreneurship in fields outside of engineering.

In the conversation, moderated by Medill Dean Charles Whitaker, Eggers discussed his new book, “Unnecessarily Beautiful Spaces for Young Minds on Fire,” published this January, which chronicles the founding of his nonprofit educational organization 826 Valencia.

The education start-up, which aims to develop the writing skills of under-resourced students ages eight to eighteen, now has nine chapters across the United States, with over fifty more inspired by 826’s educational model. As Eggers flipped through a PowerPoint of 826 Valencia’s spin-off concepts, his voice sped up with excitement.

“This is the one in LA,” Eggers said. “This is the Echo Park Time Travel Mart. It looks like a 7-Eleven for time travelers.”

Other spaces include a space alien-themed store in Stockholm and a superhero supply store in Brooklyn, which Eggers affectionately called a “Costco for crime fighters.” These heavily-themed spaces, designed by local artists, are writing and tutoring centers that offer free instruction for children across the country.

“Let’s make this far more beautiful, ridiculous (and) fanciful than is necessary,” Eggers said. “Let’s get rid of cinder blocks. Let’s get rid of that institutional hyper-modern brutalism that was invoked in the ‘60s and ‘70s in American education and let’s make it delicate again — make it weird.”

The education startup is one of Eggers’ many ventures focused on providing educational resources to underserved communities. Another one of his startups, ScholarMatch, focuses on linking students with free college counseling.

Hayes Ferguson, associate director at The Garage who previously taught journalism at NU, said he sees Eggers as a personification of how entrepreneurship on campus can extend past technology.

“Dave Eggers is a great example of someone with a background that is not what we consider an entrepreneur,” Ferguson said.

Eggers’ talk is part of a series of new collaborations between The Garage and Medill. Last December, they created a new fellowship focused on increasing diversity among media entrepreneurs.

“This is truly a partnership with Medill,” Garage marketing manager Elisabeth Wright said. “We thought it was a really interesting opportunity to show this partnership and also bring in people who wouldn’t normally come to our space.”

Eggers was a journalism major at the University of Illinois Urbana-Champaign before dropping out to raise his younger brother after the death of his parents.

Years later, he has created his own nonprofit for under-resourced parents. Toward the end of the talk, Eggers called on students in attendance to take up educational initiatives of their own, such as teaching grammar rules.