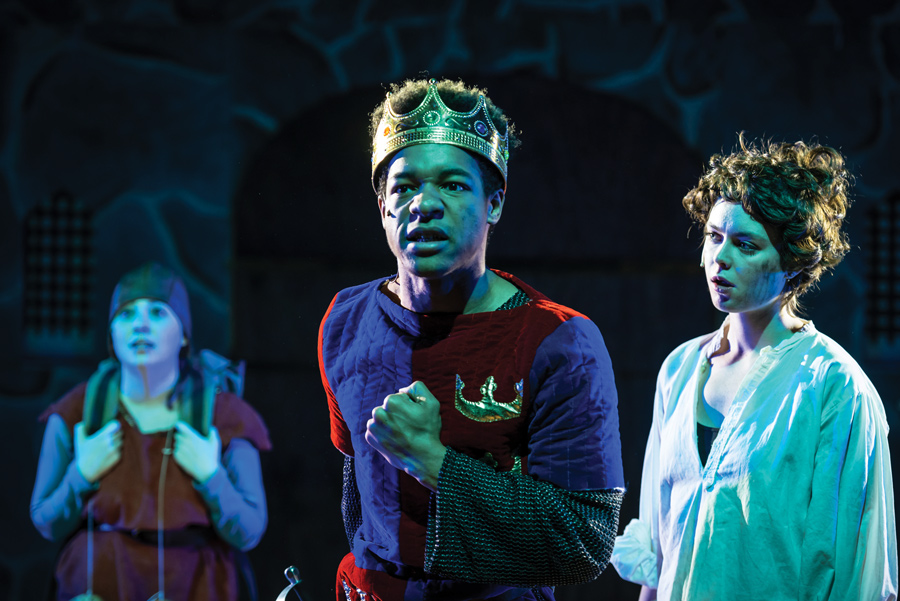 The Cast of “Spamalot” performs. The Lovers & Madmen show is opening in McCormick Auditorium this Friday.

When Communication senior Jon Toussaint received the opportunity to direct a musical toward the end of the Winter Quarter, he knew he wanted to put on a comedic musical that would bring a “beacon of light” to campus during a particularly hard time for many Northwestern students. To find a show that fit the bill, he went back to one of his childhood obsessions: the movies and sketches of the famed British comedy group “Monty Python.”

Toussaint is directing one of the largest student theater productions of the year, “Monty Python’s Spamalot.” Student theater company Lovers & Madmen is bringing the musical adaptation of the cult classic film “Monty Python and the Holy Grail” to McCormick Auditorium on Friday and Saturday.

The musical comedy parodies the legend of King Arthur’s quest to find the Holy Grail. Toussaint said the show updates the story to a current context, as the original film’s combination of 932 A.D. Medieval England setting with the 1960s and 70s humor of Python is adapted for a modern audience.

Communication sophomore Jay Towns plays King Arthur, and said the rehearsal room’s high energy has created a very welcoming experience for his first acting role in a Student Theatre Coalition production. He said the meta nature of the show allowed him to create his own interpretation and personality for the Medieval Legend, one aided by the exaggerated comedy of the show.

Though not a trained dancer, Towns said he has valued working with the choreographers for this production. The show combines traditional musical choreography and rigorous tap dancing, and although Towns has found this combination challenging, he has also found it rewarding.

“When I talk about (“Spamalot”) to people, I don’t even realize that I don’t have the words to explain the way I feel in rehearsal because it’s so unlike anything I’ve done before,” Towns said. “I cherish that a lot.”

In casting the show, Toussaint used genderblind casting, resulting in many of Arthur’s Knights of the Round Table being portrayed by female-identifying actors. Communication senior Dana Pepowski, who plays Sir Galahad in addition to serving as the show’s dramaturg, said the show’s genderblind casting has created a fresh take on “Spamalot,” as it provides multiple opportunities for female-identifying actors in a heavily male show.

Traditionally, the only female-identifying character of note in the show is the Lady of the Lake, who is meant to be a parody of token female characters in classical works. In this production, the Lady of the Lake is played by Communication sophomore Riley Mulcahy, who said playing the character in the context of the show’s genderblind casting has added to the fourth-wall-breaking, nonstop humor.

In addition to providing “beacons of light” for Northwestern students, Toussaint has also committed to helping other communities through this production. On Feb. 13, the team the hosted a special event at the Celtic Knot Public House to raise money for Family Matters, an organization that provides a safe space for underfunded schoolchildren to receive educational support, communication and leadership skills.

Communication junior and show producer Jessica Nekritz said although “Spamalot” is exciting to produce because of its many moving parts, including around 50 people in the cast and crew, what she has loved about working on the show is the joyful community it has created. Nekritz said that as a producer, she drops by the rehearsal room more than is common just because she loves the environment she and Toussaint fostered.

“It’s really nice to have that warm and wonderful community to come to every night, and to be able to create something that will hopefully make people laugh and smile,” Nekritz said.