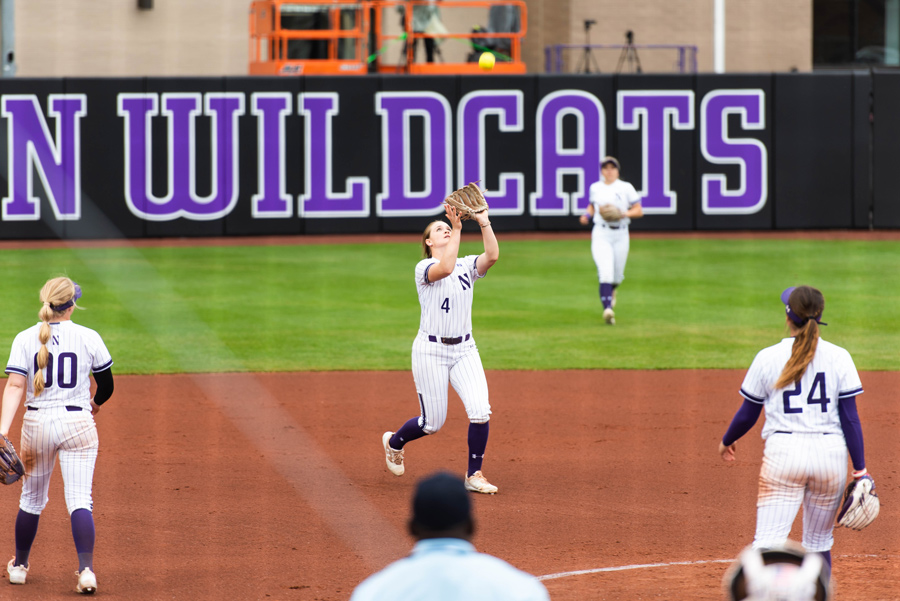 Maeve Nelson makes a catch during a 2019 game. NU will travel back to Oklahoma this weekend for the first time since last season ended in a Super Regional against the Sooners

The last time Northwestern went to Norman, Oklahoma, the squad was headed to an NCAA Super Regional, energized after winning its own Regional in Evanston. But after two games, the Sooners knocked the Wildcats out of the tournament, not allowing them to score a single run.

Though she wasn’t on the squad last year, freshman pitcher Sydney Supple said the Cats aren’t thinking about last year’s games against Oklahoma.

“It’s very much ‘new year, new season,’” she said. “Playing and executing our game is our main focus.”

Coach Kate Drohan agreed, adding that the team has improved since it last faced the Sooners, but still has more to do.

After the Mary Nutter Classic last weekend, where the Cats only won one of five, Drohan said the team especially needs to work on following through and ending games with a win.

“Sure, there are lots of things that we’re doing differently this year than last year, but it’s really about us focusing on our team right now to play better softball,” she said. “We’re not here to just be competitive — we’re here to finish those ballgames.”

NU will face some tough pitching this weekend as they try to do that. The Mean Green has three pitchers with earned run averages below 1.30 and the Sooners return senior pitchers Shannon Saile and Giselle Juarez, who both silenced NU bats in last year’s Super Regional.

Saile has only given up a handful of runs this season and Juarez — who was named a first-team All-American the past two years — has also continued to perform well this year, though she’s only put in around six innings of work.

All the teams this weekend are also strong offensively.

In the past four games, Abilene Christian has scored 43 runs, and senior catcher Blair Clayton alone has a slugging percentage of .659. North Texas also blew out opponents recently, crushing UT Arlington 10-1 on Tuesday. And though Oklahoma graduated offensive powerhouse Sydney Romero, the Sooners still have a stacked lineup that’s accumulated a team batting average of .299.

Despite the challenging opponents, sophomore first baseman Nikki Cuchran said that she knows the Cats have what it takes to be successful this weekend against good teams.

“We know that we can hang with them,” Cuchran said. “We shouldn’t underestimate ourselves. Going into this weekend, too, we have a good mindset, and we know we can hold our own.”