Lacrosse: No. 6 Wildcats look to bounce back against Stanford 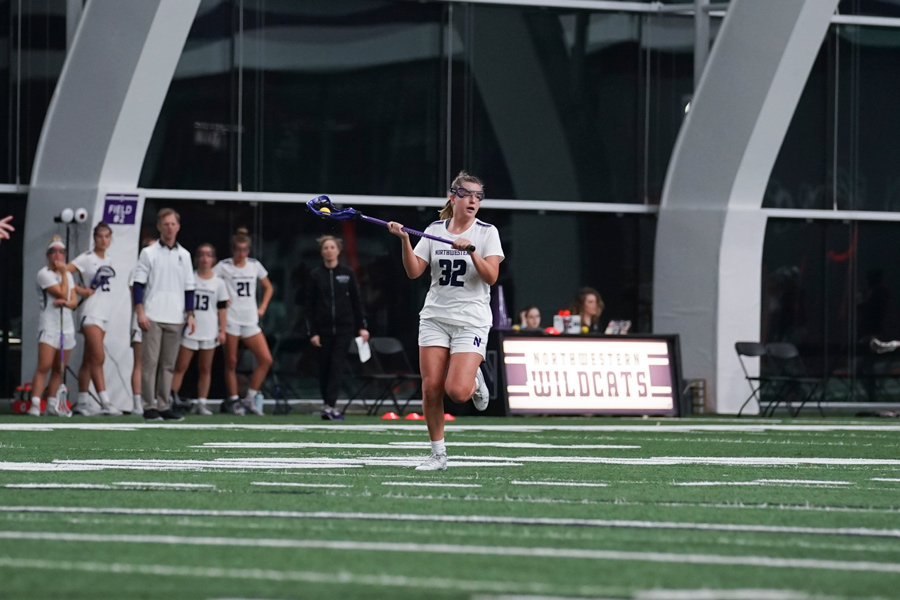 Claire Smith runs down the field. Smith and the Wildcats will look to bounce back from last weekend’s loss this Sunday against Stanford.

Following a tough loss last weekend, Northwestern is hoping to rebound this Sunday against Stanford.

Coach Kelly Amonte Hiller said the loss came from a lack of quality throughout the field.

“We didn’t play our best,” Amonte Hiller said. “Everybody has to kind of look within and try to be better.”

A positive from the Syracuse game was the strong play of sophomore goalie Madison Doucette, who notched a career-high 11 saves. While Doucette and redshirt junior Julie Krupnick split time in the net in the opening four games of the season, Doucette played the entire 60 minutes last Saturday.

Amonte Hiller said that the change was one she and her staff made after tracking statistics for some time.

“We felt like Madison had some momentum, we wanted to start her and see how she did,” she said. “(Doucette) did really well. She made some big saves”.

That said, the starting position has yet to be locked down.

“I don’t think necessarily that’s what we’re going to do every single game,” Amonte Hiller cautioned. “I think we have three really good goalies, and we’re prepared to play whoever is best, just like any other position on the field.”

While a couple of early-season losses may be worrying to some NU fans, there are several reasons to stay optimistic about the rest of the season.

Both losses have been to elite teams, with Notre Dame and Syracuse ranked No. 2 and No. 4, respectively, in the nation.

The Cats had a similar opening to last season, starting 4-3 in their first seven games against similarly tough opposition, but turning it around to go 12-1 until their eventual national semifinal defeat against Maryland.

One issue that NU must fix to start another winning streak: turning the ball over. The Cats coughed up 22 turnovers against Syracuse, their highest mark of the season. To date, NU has averaged 15.2 turnovers per game, up from 13.4 last season.

“If you turn the ball over against a good team, they’re going to make you pay for that,” Amonte Hiller said. She added that because of the Cats’ aggressive style, “we have to be willing to take chances. But, we just can’t have the carelessness.”

On Sunday, NU faces off against Stanford (2-2, 0-0 Pac 12), who is coached by NU alum Danielle Spencer. Spencer played and coached on some of the Cats’ best-ever teams.

While the Cardinals may not be on the level of Notre Dame or Syracuse, so far this season they’ve shown they can compete with the best teams in the country. Their two losses came against No. 7 Virginia and No. 10 Denver by a combined five goals.

“We need to focus on playing our best game, playing with a sense of aggressiveness and care,” Amonte Hiller said. “Playing our hardest, that’s all we can really control.”