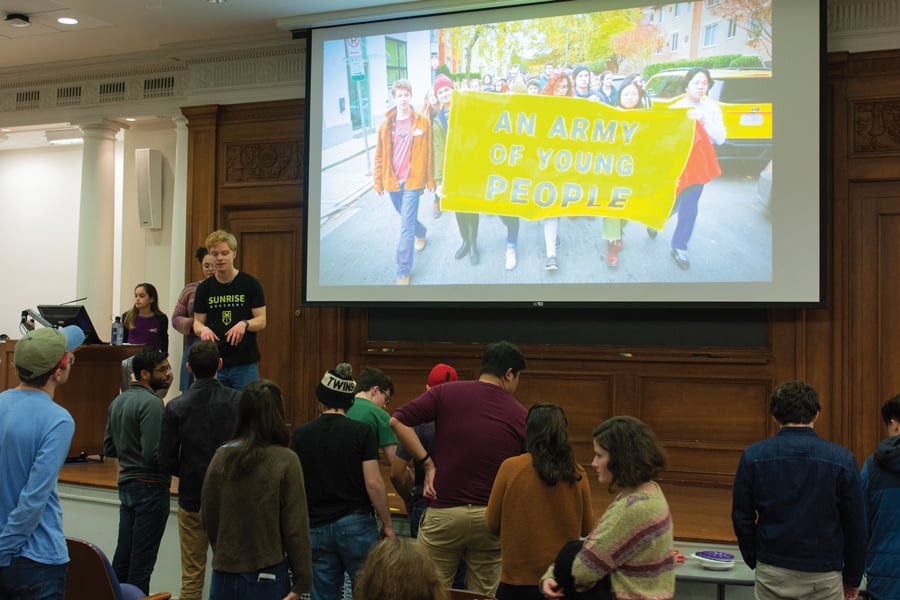 Members of E-Town Sunrise. The group is working to change sustainability practices at Evanston Township High School and across the city.

A pop of color made an appearance at this week’s City Council: swaths of residents in shades of green contrasted against the neutral tones of the Lorraine H. Morton Civic Center. They were there to support a call to climate action from two Evanston Township High School students.

ETHS sophomore Lily Aaron and senior Aldric Martinez-Olsen chose to spend their Monday night advocating for the further implementation of the Climate Action and Resilience Plan, which calls for carbon neutrality by 2050, 100 percent clean and renewable electricity by 2030 and zero waste by 2050 within Evanston.

“We spoke on our experiences as teenagers who are scared for their futures,” Aaron said. “It was super empowering, and really felt like the City Council were listening and actually engaging.”

Aaron and Martinez-Olson attended the meeting on behalf of E-Town Sunrise (formerly E-Town Climate Action), a coalition of around 50 to 60 ETHS students committed to climate activism.

E-Town Sunrise is a “hub” of the Sunrise Movement, a 501(c)(4) environmental advocacy organization championing political action on climate change. Since its founding in 2017, the national youth-led campaign has established over 300 hubs — organized collectives of volunteers — across the country to fight for environmental legislation and cultural realignment.

Dejah Powell, a midwest regional organizer for Sunrise, said she works with the Evanston hub by ensuring it plans large action and escalation to reframe what Earth Day and climate change mean to students and what they can do to act.

“The biggest thing is right now, what the climate change movements need, is young people standing up, taking action and disrupting… the Sunrise Movement is mobilizing people to demand action,” Powell said. “Water bottles and recycling, that’s cute, but we need to do more about climate change.”

E-Town Sunrise was founded by ETHS senior and Climate Reality Leader Bella Hubbard, who found herself drawn to climate activism during her time as an exchange student in Ecuador last year. After learning how vital the health of the environment was to the livelihoods of individuals worldwide, Hubbard said she felt a “call to action” to organize and become a leader in the movement.

With around seven other students, she created a Sunrise hub in Evanston in December — since then, the group has connected with every environmental organization in the city, and has secured a sponsorship from Citizens’ Greener Evanston.

“The climate crisis scares the the fuck out of me,” Hubbard said. “I think about it all the time. And I’m very terrified. And also inspired. I know that this is so necessary and sort of like a confrontation of all the wrongdoings that this world, and especially the United States, has continued to uphold, all these systems have to like really come to an end. I think now’s the time to step up. I am in a position to do so, and therefore I will.”

In December, the group led a “Chalk-Out” in conjunction with the national “Road to the Green New Deal” walkouts, leaving ETHS at the end of the day to host a rally in Fountain Square and cover the sidewalks of Downtown Evanston in messages on the climate crisis.

“We handed out chalk and told people to write messages like ‘This is a Climate Emergency,’ ‘Climate Justice Now,’ ‘We Need a Green New Deal,’” Hubbard said. “It was a way to wake up Evanstonians, to get them to just look at something and be like, ‘Oh, shit.’ But it also really felt good for students… people really enjoyed that feeling of being able to write how they felt.”

Calling on adults twice their age to take action is nothing new for E-Town Sunrise members. Last week, Aaron said she and Hubbard met with Mayor Steve Hagerty in an effort to push Evanston to declare a climate emergency. The group also consistently meets with the ETHS School Board and administrators, including ETHS Principal Marcus Campbell.

“It’s been slow, and the administration has been hard to work with… we’ve had to continuously push them and expect more from them,” Hubbard said. “But I’m realizing more and more how possible it is for us to beat this climate crisis, and I feel a responsibility and real passion to be a part of the solution.”

ETHS administrators had not responded to requests for a comment at the time of publication.

E-Town Sunrise currently has four main goals: implement a climate curriculum for all students, create a zero waste program, transition the school to renewable energy and foster a cultural shift within everybody at ETHS to understand the weight and urgency of the climate crisis and who it’s affecting.

So far, Hubbard said these goals are far from being fulfilled. She noted that curriculum planning will be workshopped this summer by teachers and potentially implemented into sophomore civics and science classes. To accomplish zero waste and efficient recycling, E-Town Sunrise has initiated a compost program in one of the cafeterias with hopes for expansion throughout the school. Although ETHS administrators have “not shown any will” to transition to renewable energy, Hubbard said students are continuing to meet with professional experts on solar energy.

As for initiating a cultural shift, Aaron said the group has shifted their focus from civil disobedience and activism within the city to doubling down on how to energize the student body during Earth Month, which begins in April.

She added that the group hopes a month of advocacy and programming will educate their peers on environmental advocacy and further people’s understanding of the climate crisis.

“Making changes kind of addictive, like when you’re at march or speaking at City Council,” Aaron said. “I mean, when you’re up there, and you’re loud and you know people are listening, it’s really amazing… I’m 16, and I have a lot of stuff I want to do. None of it is possible if I don’t have a planet to do it on.”