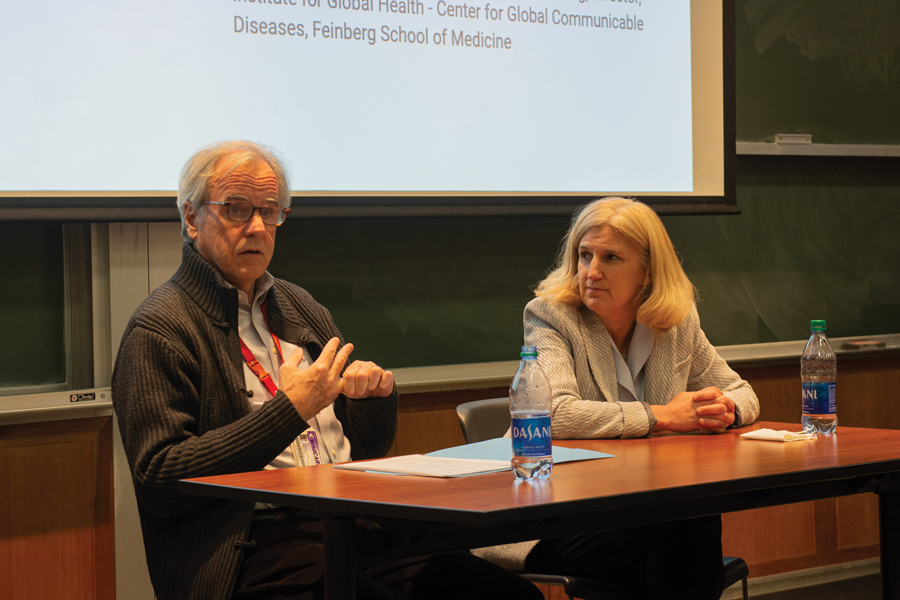 Robert Murphy, director at Feinberg’s Institute for Global Health, and Karla Satchell, professor of Microbiology-Immunology at Northwestern. The teach-in on the new coronavirus outbreak discusses the ongoing development of COVID-19, along with the racist undertone associated with the disease’s public discourse.

Families were separated during Lunar New Year and health care workers were burnt out from the pressure. Her own family members, despite being far away from the epicenter of the virus breakout in Wuhan, were unable to leave their home in the past month except for going grocery shopping.

“People are really impacted by this disease,” Chen, a first-generation Chinese immigrant, said. “I wanted to do something about it, but it’s really hard when you’re so far away.”

The publicist of Chinatown Health Initiative, Chen organized a teach-in on the new coronavirus outbreak Thursday in Annenberg Hall. To introduce interdisciplinary perspectives to the debate, the event invited public health specialists, a journalist and an ethnic studies scholar to discuss the ongoing development of COVID-19, along with the racist undertones associated with the disease’s public discourse.

Jason Oliver Chang, an associate professor of Asian American Studies at the University of Connecticut, joined the panel through Skype. He said the racist dialogue surrounding Asian diseases has a historic root that goes back 200 years. By demonizing Asians and perceiving them as backward, untrustworthy and resistant to assimilation, Chang said, the portrayal often creates a general distrust against the Asian population and justifies widespread hatred against them.

“It’s really predictable because of the way people rationalize or what comes after that,” Chang said. “They deny political facts. They wage war. They pass exclusions and bans. The rhetoric of ‘sick Asian’ corresponds with the policies that imperial powers wanted to use in the first place.”

Reminded of the discrimination, mistreatment and boycotts during the SARS outbreak in 2003, Chang said he was paranoid and “unprepared” when he noticed a similar reaction toward the coronavirus outbreak.

To address racism around the outbreak, Chang created a public google-doc tilted “Treating Yellow Peril.” He invited people across the globe to contribute to the tracking of racial fears and anxieties in relation to the virus.

“This is a gut check for Asian American political activism,” Chang said. “You can’t sit back and just be okay when there is a model minority image. We need to find allies and stick with other minorities who are being persecuted.”

Robert Murphy, director at Feinberg’s Institute for Global Health, and Karla Satchell, professor of Microbiology-Immunology at Northwestern, informed the audience about the virus’s pathology and discussed its potential breakout in the U.S. New York Times video producer Muyi Xiao has family in Wuhan and also joined the panel through Skype to discuss the public discourse surrounding COVID-19 in relation to government censorship and political activism.

Weinberg sophomore Revika Singh said she came to the event because she is concerned about the signs of xenophobia around COVID-19. Racist memes and jokes continue to circulate online, Singh said, suggesting a nationalist sentiment that associate Asian people with inherent unhygienic nature.

“We commonly see things like the Muslim ban and the stuff at the border, but for a lot of young Asian Americans, we haven’t experienced this level of xenophobia during our lifetimes,” Singh said. “It is a good point for Asian Americans to see how the inherent colonialism and nationalism entrenched in the political system are affecting us, and it offers a point of solidarity between all of our communities.”