Fencing: No. 9 Northwestern falls to No. 4 Ohio State at Midwest Championships 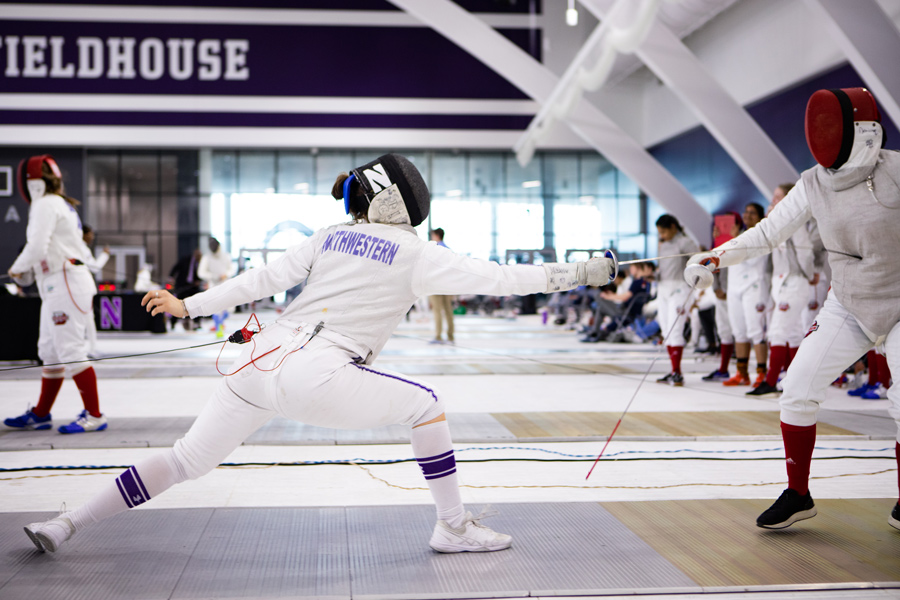 A Northwestern fencer lunges. The team was unable to make it to the finals of the Midwest Championships despite having one of their best seasons in recent years.

With a No. 9 national ranking and a 29-11 record, Northwestern had one of its best regular seasons in recent years in 2020.

But coach Zach Moss wasn’t satisfied. Despite the Wildcats’ top-10 finish, his squad’s inability to defeat No. 4 Ohio State bugged him. Moss was hopeful that the Cats could upset the Buckeyes at the Midwest Championships, an event that NU has won for two straight years.

But last weekend in Columbus, the Cats came in second place as Ohio State defeated NU for the third time this season.

“We went there with a goal to win and obviously that’s not what happened,” Moss said. “But in terms of our process and preparation and where our team is at, I’m really happy with it. We’re in a really good place this season to carry us forward.”

On Saturday, the squad took part in individual events where fencers faced off in pool play before advancing to direct-elimination matches.

NU flourished in the opening rounds and had 16 fencers finish in the top-10 of their weapon class. But the Buckeyes’ strong fencing kept the Cats out of the finals and sent the team home with only four bronze medals.

In the individual semifinals, freshman sabre Anna Biasco and sophomore epée Julia Falinska both tied for third-place after losing their matches to Ohio State’s Camilla Rivano and Alexanne Verret, both of whom won their respective competitions. Sophomore Abigail Swallow and senior Abby Tartell defeated fellow NU fencers freshman Thea Nguyen and sophomore Robyn Song before tying for third place in the sabre division.

On Sunday, NU obtained a 20-2 record in the opening rounds of team play and cruised into the semifinals.

The Cats’ foil squad dominated Michigan 5-0 in the semifinals and grabbed an early 2-0 lead on the Buckeyes in the finals thanks to wins by freshman Anna Biasco and sophomore Alyssa Chen. But NU collapsed down the stretch and fell 5-2.

After defeating the University of Chicago 5-1 in the semifinals, the Cats’ sabre unit started off strong in the championship thanks to a 2-1 performance by Nguyen. But NU finished second once again as Ohio State won 5-2.

A 5-0 semifinal victory over the Wolverines gave the Cats’ epée squad a lot of momentum, and sophomore Emma Scala and Falinska built upon it with two crucial finals victories for the Cats. But the Buckeyes outperformed NU and completed the title sweep with a 5-4 win.

Despite her disappointment about the final result, Scala — who went 4-1 on Sunday — was proud of her team’s unity throughout the weekend.

“We have one of the most cohesive teams we’ve had in a long time,” Scala said. “We are really strong as a unit and as a really supportive group. A lot of the victories we have come from our strong team culture and dynamic.”

Moss said the team has their work cut out for them before resuming postseason play at the NCAA Regionals in March.

“A lot of focus on preparing our mental approach and tactical strategy,” Moss said. “We need those clarified so that when we step on the fencing strip, we know who we are.”