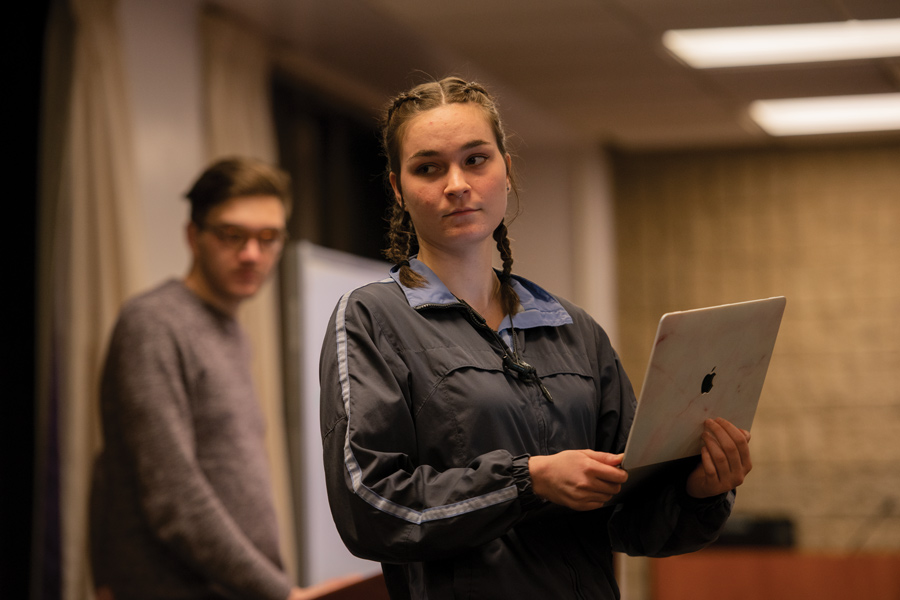 Elizabeth Sperti introduces the bill, which would create an “ad hoc” committee to consider creating an advocacy office.

Associated Student Government introduced legislation at Wednesday’s Senate that would establish a committee to consider creating a one-stop advocacy office for all campus-related concerns.

The bill, authored by ASG parliamentarian and Weinberg sophomore Elizabeth Sperti and co-sponsored by four ASG leadership members, would create an “ad hoc” committee, which is tasked with fulfilling the objectives of passed legislation and would expire at the completion of its responsibility or by a majority Senate vote.

In this case, the ad hoc committee would research student needs and draft recommendations to create a service entitled Student Advocate’s Office.

“A Student Advocate Office could further empower students’ voices by bringing concerns about unjust or poorly-designed policies directly to high-level administrators, and make recommendations for reforms to ensure that Northwestern’s policies reflect the interest of students and the values of the community,” the legislation says.

The advocacy would span academics, conduct, financial aid and more. Members of the new office would be trained by the Office of Equity and the Center for Awareness, Response and Education to consult students under an agreement of confidentiality to protect their privacy. In addition, office leadership plans to meet with the Offices of the Provost, Student Conduct and Financial Aid.

The legislation cites that peer institutions have similar programs. Associated Students of the University of California established a position to advocate for students on issues of financial aid, administration and grievances.

Creating the committee is the first step to establishing the service. The committee will be chaired by ASG executive vice president and SESP senior Adam Davies, Sperti, five ASG members elected by the Senate and more if deemed necessary.

The establishment of such an office is a result of a long-awaited effort, said Weinberg senior Henry Molnar, ASG’s chief of staff. Emily Ash, ASG’s former president (Weinberg ‘19) introduced the bill last year, but it was too late in the academic year to gain traction.

“It’s a big time commitment,” Molnar said. ”There’s a lot of things to consider when you’re making this kind of thing.”

Still, Senate members said they are willing to put in the effort.

SESP sophomore Daniel Rodriguez, an ASG senator, said many students have found the bureaucracy regarding grade appeals, conduct meetings and other University-related functions hard to access.

“We know that a lot of students often struggle with navigating processes or don’t really know where to go, and sometimes to hear those resources in (Senate meetings), like how to navigate them from a student view, was just as efficient as it was like talking to administration,” Rodriguez said.

The problem with Northwestern’s services, Davies said, is that they are so decentralized. Passing the bill would be the first step to find the “link in the middle that is missing,” they said.

Sperti said the impact of the proposed office would go beyond advocacy. It may increase students’ literacy in navigating the many offices and services within the University, and, in turn, teach these resources to other students, she said.

The student government, she added, can make the learning less intimidating.

“It can feel overwhelming to have so many offices and you don’t know exactly where you’re supposed to go for a particular problem that you might have,” Sperti said. “I think the benefits are twofold.”

Related Stories:
-“Change is a slow, long process and we took a step in the right direction”: ASG votes to reduce senate seats, discusses representation
-ASG leaves session without vote on constitutional amendment to reduce seats