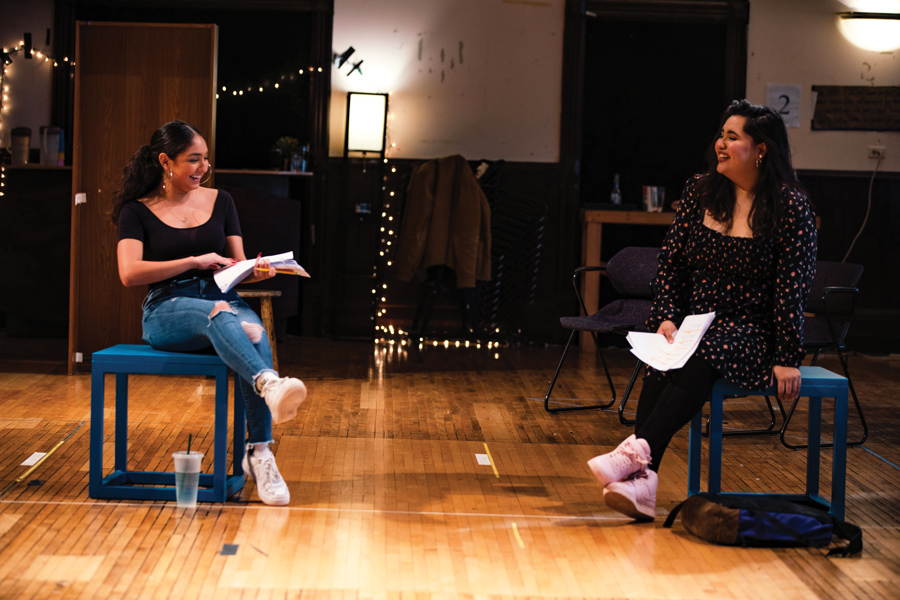 The cast of “I Am Not Your Perfect Mexican Daughter” rehearse. The show opened Wednesday, and will close April 4.

When Communication prof. Sandra Marquez was in grad school, she went to see Mexican-American writer Sandra Cisneros in a public reading of her short story collection “Woman Hollering Creek.” Marquez was deeply moved by the experience, but she didn’t quite know why. Eventually, she realized she finally had an example of a Latina succeeding in the arts, showing her she had the ability to pursue her dreams and succeed.

“When you finally see yourself, especially when there’s a dearth of that, that acknowledgement that you exist runs deeper than words can say,” Marquez said.

Marquez is hoping to expose modern Latinx teens to the representation she sought in her youth through her latest play, “I Am Not Your Perfect Mexican Daughter.” The show premiered Feb. 26 at Steppenwolf Theatre, and will close April 4. “I Am Not Your Perfect Mexican Daughter” is part of the Steppenwolf for Young Adults series of programming, which produces two shows focused on teenage audiences a season and includes special performances reserved for students and schools in Chicago.

“I Am Not Your Perfect Mexican Daughter” began as a 2017 young adult novel by Erika L. Sánchez, and was adapted to the stage by Isaac Gomez. The book and the play tell the story of Julia, a Chicana high school student who is dealing with the death of her older sister Olga. Julia finds herself struggling with her dreams of being a writer and her complex relationship with mother and the expectations she have for her. To find closure, she begins digging into Olga’s secrets, and discovers that her image as the perfect Mexican daughter was much more complicated than anyone realized while she was alive.

Because it was adapted from a book, “I Am Not Your Perfect Mexican Daughter” is written in an unconventional style for plays, as it is almost cinematic in its approach to the story. According to Marquez, there are 40 scenes in the 90 minute play, and as a result the story moves at a very fast pace that is difficult but rewarding to translate to a theatrical context. The show is presented in a very bare space, with only a few cubes used as set dressing. However, the space is painted in a colorful way to evoke the South Side Chicago neighborhoods in which the story takes place.

In addition to outreach to Chicago teens through the student performances, the production will also be working with a program called Storycatchers to tour the show in several juvenile detention centers. Marquez said she feels the show, with its Chicago setting, hits close to home to these audiences, and she thinks the program is important in how it provides them with exposure to healthy outlets.

Dyllan Rodrigues-Major, who plays Olga, has previously worked with Storycathers through a past Steppenwolf production, and said the experience was deeply rewarding because the students are encouraged to provide feedback to the show, causing some of the most direct dialogue and interaction the cast and crew have with their audiences. Rodrigues-Major said she hopes that through this dialogue, they can feel valued when they are often forgotten and ignored by society.

“I Am Not Your Perfect Mexican Teenage Daughter” has an almost entirely Latinx cast, which Rodrigues-Major said is the first time she has experienced that in theater. Rodrigues-Major said the cast has been a joy to work with, and a commonality has formed that has helped them all bond. However, at the same time, the experiences and viewpoints of the cast members have proven to be extremely varied, which to her reflects the vast number of experiences that exist among Latinx people. Rodrigues-Major said what makes “I Am Not Your Perfect Mexican Teenage Daughter” special is it doesn’t try to provide one definitive Latinx story, but instead tells a very specific and evocative story about one young Chicana woman’s story.

“It’s a play about a person and the experience of being this person rather than a defined plot,” Rodrigues-Major said. “Which is what I really love about it. You get such a beautiful slice of this young woman’s experience and how she dealt with one of the hardest moments of her adolescence.”