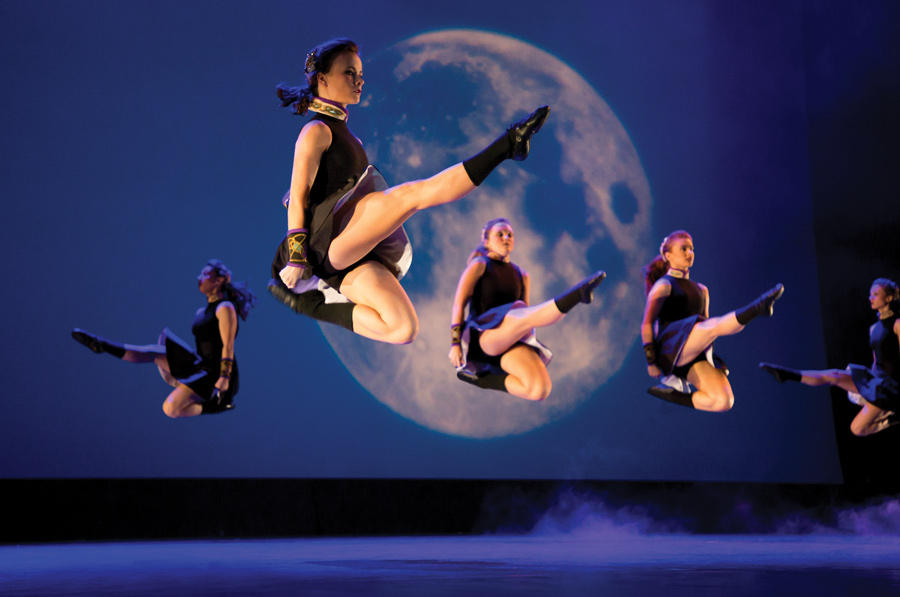 Ali Doughty performs alongside members of Trinity Irish Dance Company. The organization’s next show is on Feb. 29 at the Auditorium Theatre in Chicago.

For most of the week, Feinberg third-year Ali Doughty spends her time studying physical therapy. But on the weekends, she applies her knowledge of how the human body moves to a completely different field as a world-class Irish dancer.

Winner of the 2014 World Irish Dancing Championships, Doughty is now a member and artistic associate of Trinity Irish Dance Company. She will perform in the Irish American company’s next show, which runs Feb. 29 at the Auditorium Theatre and will feature a live band and a special appearance by Grammy-nominee fiddle player Liz Carroll.

“Our tagline is ‘Everything you expect, but like nothing you’d imagine,” associate artistic director and dancer Chelsea Hoy said. “We create different dance pieces that are all rooted in Irish traditions, but look and feel a different way.”

For example, Saturday’s show features work from tap choreographers, as well as a piece Hoy describes as a fusion of Indian and Irish styles. Another piece, co-choreographed by Hoy and company founder and artistic director Mark Howard, takes influence from theater and pays homage to Auditorium Theatre’s long history of housing various musical, dance and comedic acts.

Howard said Irish dancing is often regarded as trite and silly by the public, due to lack of exposure beyond commercialized works like “Riverdance,” but TIDC aims to showcase the artform in a different manner.

“(Our company) lives in that performing arts wheelhouse where we want the form to not only entertain, but also matter,” Howard said. “Any serious art has to happen at the level of independence and experimentation. Every artform needs to live and breathe.”

TIDC makes sure its dancers, too, are given space. Hoy said the company’s unique model allows its members to have a full-time job or academic career — however, they’re expected to prepare on their own time ahead of rehearsals that take place one weekend per month.
For Doughty, balancing her commitments to school and dance means her schedule is usually booked out months in advance. But as long as her legs hold up, she said she’ll continue performing with TIDC after graduating in April and beginning her full-time career.
“At the end of the day, Irish dancing has always been such an outlet for me,” Doughty said. “Whether studio time is spent dancing up a storm and sweating, creating a movement, or collaborating with fellow company members or a guest choreographer, I always leave re-energized and inspired.”

Doughty said she has found TIDC to be an empowering space for her in the often male-dominated world of Irish dance. In TIDC, all dancers are given equal opportunity to demonstrate their skills, which she finds is not always the case.

“A lot of commercial Irish dance troupes like Riverdance kind of portray women in the background, line dancing with the men out front, stealing the thunder,” Doughty said. “I really love that Trinity Irish Dance Company presents men and women on equal footing.”

Although TIDC doesn’t have principal dancers, Howard said Doughty has several moments during the upcoming show to showcase her formidable skills.

All in all, he hopes the show will help audiences see all of the possibilities that this Irish art form can hold.

“Whether the idea of Irish step dance appeals to anybody or not, I guarantee if they come to the Auditorium Theatre that nobody dislikes like this company, from eight year olds to 80 year olds,” Howard said. “It’s gonna be electric.”