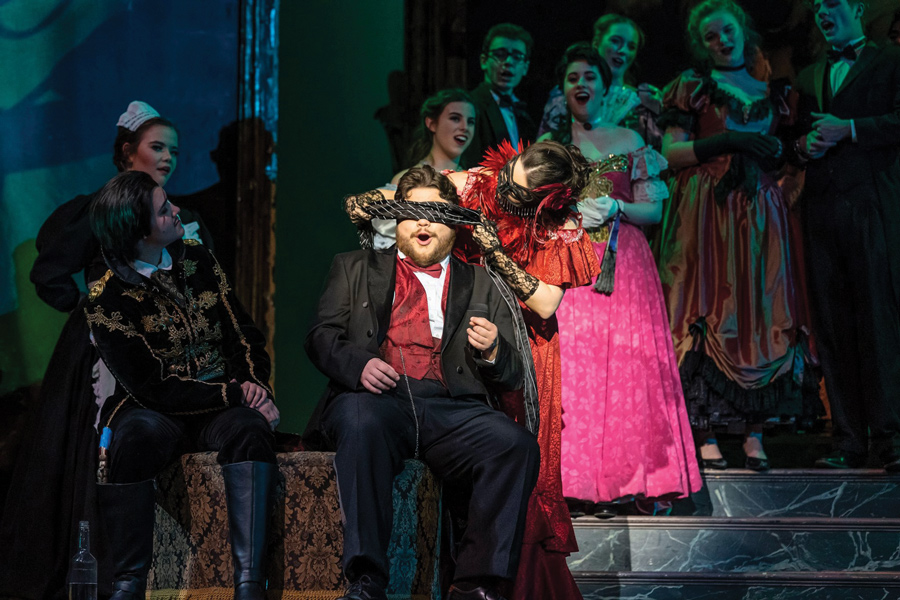 The cast of “Die Fledermaus.” The operetta will open Thursday.

When Aryssa Burrs took the stage for her first college opera, Johann Strass’ “Die Fledermaus,” as a freshman, she was a member of the chorus. Now, as a second-year Bienen master’s student, she is set to play Prince Orlovksy, a rite of passage role for mezzo-sopranos.

“When I was a freshman, I specifically remember there were two master’s students that were double cast in the role of Orlovsky, and I was obsessed with their voices,” Burrs said. “I got to college and was inspired by these two women and was like, that’s exactly what I want to be on stage. It’s been really cool to step into that moment.”

Bienen’s production of “Die Fledermaus,” which is directed by Joachim Schamberger, runs Thursday through Sunday in Cahn Auditorium. The show is a light-hearted operetta, a shorter opera with spoken dialogue. It tells the story of a Dr. Falke, who throws a party in Vienna, to enact revenge on his friend, Eisenstein, for playing a trick on him years prior. While Eisenstein is oblivious, all of the guests and performers are in on the plan.

As a genre, operetta is often adapted by changing the dialogue, the setting or significant plot points, making each production unique. Although Schamberger chose to keep the setting in the original time period of late 19th century Vienna, he continued the tradition of updating the dialogue to reflect the political and social climate of today’s world, drawing on current events and quotes from the current president.

“The story is just really witty and funny,” Schamberger said. ‘It’s something that you can look deeper (into) if you like, but you also don’t need to, It’s a piece of great entertainment.”.

While the plot might have dark undertones, “Die Fledermaus” is pure comedy with light-hearted musical numbers. Andrew Payne, a second-year master’s student in voice and opera, plays Frank, the prison warden who accidentally arrests the wrong man before going to the party. Payne said he has enjoyed taking part in a light comedy because it’s challenging but also incredibly entertaining.

“This story is just so ridiculous,” Payne said. “It’s something out of a romantic comedy. It’s a good distraction to the chaos that is modern life and being a Northwestern student.”

For this production, Schamberger modernized the show by having the dialogue performed in English and displaying English supertitles above the stage during the original German songs.

The show is a rented production, meaning the costumes and sets were previously made and used for other performances of “Die Fledermaus”. Burrs said the production quality is higher than that of other Bienen operas and allows 19th century Viennese high society to come to life before the audience’s eyes.

“You just feel like you’re in the richest, most amazing house ever,” she said. “(It’s) really cool to be a part of a big production,” she said.

Burrs said although people outside the opera community often consider it to be a dead art form, “Die Fledermaus” shows how opera can be enjoyable and modern, even if they’re performing a show written over 100 years ago.

“It is important for us as artists to not only just make the art that is really, really fulfilling for us and like this small sect of people that really enjoy coming to these types of performances, but also making art that works for a broader audience,” Burrs said. “A piece like “Die Fledermaus” is exactly that.”