Letter to the Editor: NUCR is hypocritical on free speech 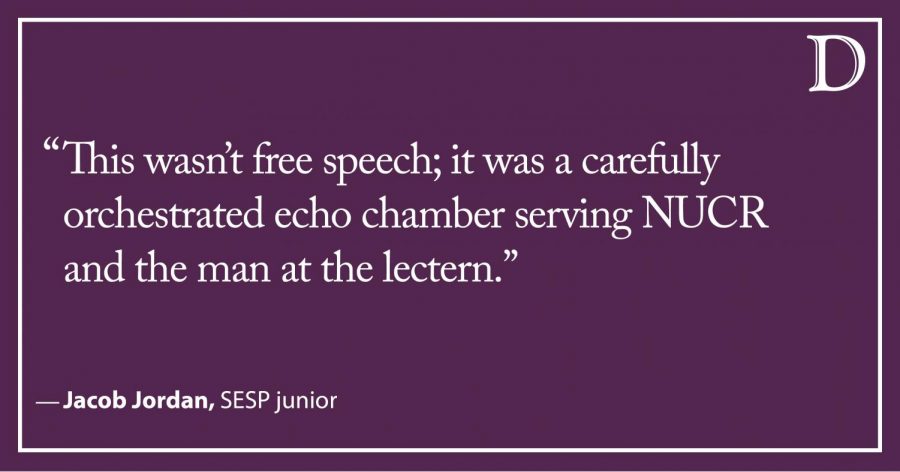 I could not ignore the hypocrisy of Northwestern University College Republicans (NUCR) Vice President Dominic Bayer’s comments in a February 19 story “Northwestern community shares perspectives on free speech ahead of the 2020 election.” Bayer is quoted in the story as saying, “I do believe it’s appropriate to have protests outside the buildings or take advantage of the Q&A section during events to express disagreement with a speaker.”

However, in November, when former Attorney General Jeff Sessions spoke at a NUCR event, ushers distributed index cards before the event and encouraged audience members to write questions for the speaker. I and many others submitted questions. Bayer prohibited the audience from taking “advantage of the Q&A section” by visibly and vigorously shuffling through the many notecards submitted by angry onlookers to lob softball question after softball question to Sessions. He was the only one who asked questions.

Bayer’s hypocrisy is emblematic of NUCR’s behavior. It’s one thing to invite a sexist, racist, homophobic and xenophobic man to our campus under the guise of free speech. It’s another to promise a question and answer section before cherry-picking questions and refusing to allow a portion of the audience the ability to question the speaker.

Free speech is a two-way street. The speaker can say what they wish to, but listeners should be given the chance to respond. That’s dialogue — which is what I assume NUCR, which loves to praise unfettered free speech, was looking to facilitate. It’s not what they got.

When Sessions was asked about LGBTQ+ policy under the Trump administration, he said the administration did not roll back any protections. That’s a lie. Bayer did not correct or challenge Sessions on this falsehood.

This wasn’t free speech; it was a carefully orchestrated echo chamber serving NUCR and the man at the lectern. Bayer’s words are out of line with his actions and the actions of his organization. In the future, NUCR and Bayer should stand by their public statements and let students question speakers.

After all, a grown man should be able to defend his ideas in front of a bunch of college students.