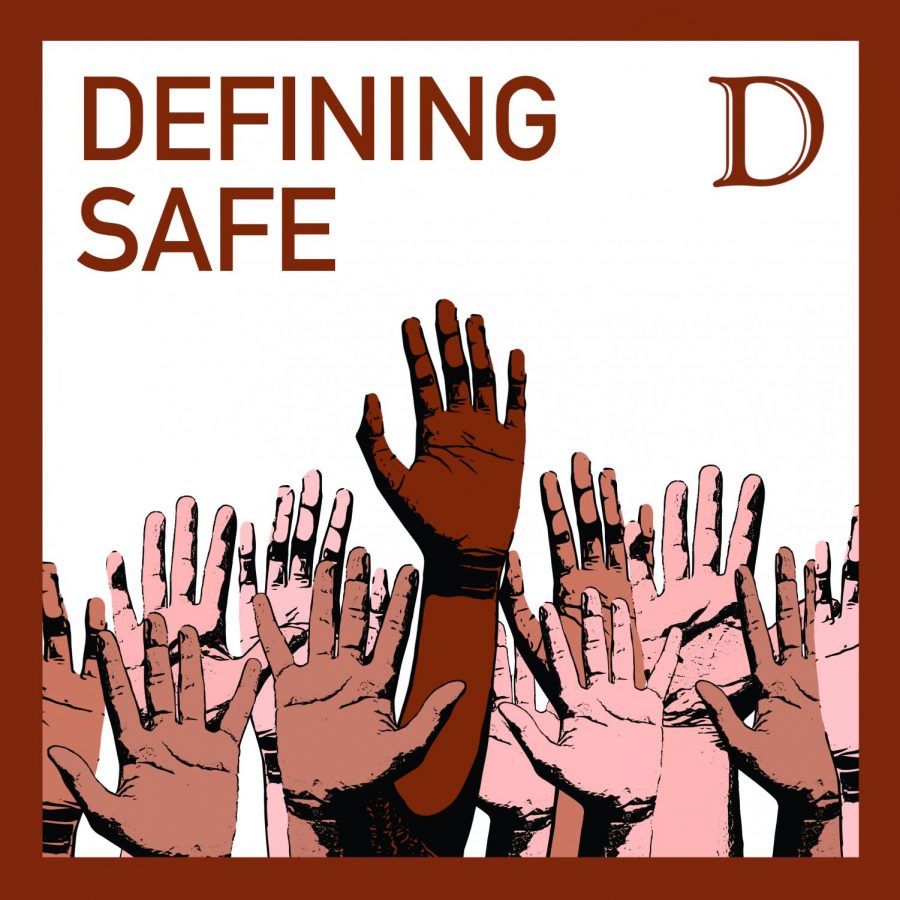 ALEX CHUN: From The Daily Northwestern, I’m Alex Chun, and this is Defining Safe, a podcast about the experiences of marginalized communities on campus.

BEN JUNG: At one point I thought it was really like prison ‘cause you can’t leave. You’re stuck in the same facility for almost two years. And there are a set of rules that you have to comply to. You have to act in a specific way.

PRABHAV JAIN: There was a 32 kilometer march — that’s 20 miles. And the tough part is the body armor — it’s not the weight that gets you — it’s that it traps so much heat. Singaporean weather is like 85 or 90 Fahrenheit. It’s super humid, you’re wearing long sleeves, of course, and the body armor traps even more heat.

ALEX CHUN: Around 10 percent of Northwestern undergraduate students are international. Out of the top 10 countries represented by these students, seven mandate some form of military service from their citizens. Ben Jung, an international Weinberg sophomore from South Korea, enlisted to serve after his freshman year at Northwestern.

ALEX CHUN: The decision to enlist after freshman year was a tough one. Ben had gotten used to life at Northwestern, joining the dance group Fusion and making friends, but part of the reason he had chosen to enlist after his freshman year is precisely what made it so difficult to leave: he had people who would wait for him.

BEN JUNG: All of them were like, “Ben, can you just stay for another year? It’s gonna be so fun.”

ALEX CHUN: To prepare for his time with the Korean military, Ben chose to work on his Korean-speaking skills. The ability to speak more than one language is extremely valued and can land you in a speciality position such as a translator.

BEN JUNG: The task is pretty tough, but then just overall military life becomes easier if you get that specialty. So I practiced my Korean, I took the exam and applied to go and enlist as a translator. I got it. My military base was called Defense Security Support Command. It’s basically a military intelligence agency, so, it’s confidential, but it is basically just like a CIA/MI6 kind of thing for Korea.

ALEX CHUN: South Korea’s version of the CIA is known as the Korea Central Intelligence Agency. Although he worked for the Intelligence Agency, like all others enlisted, Ben was required to complete boot camp — a multi-week process of grueling physical activity.

BEN JUNG: It’s like five, six weeks training…that’s where you just learn the basics of what being a soldier is like. And honestly, I’m gonna say this now, in my two years that initial five to six weeks was probably the hardest time. It’s tough as it is. But then you’re thinking you have one year and, like, seven months ahead of you, so it’s very depressing. Feels like there’s no hope in this place.

ALEX CHUN: During boot camp, Ben found it difficult to stay connected with his friends at Northwestern. Phone calls were scarce and often given as a reward. This meant that Ben often used his limited time on the phone to call his family.

BEN JUNG: In the initial boot camp, you’re not allowed to talk to your friends or family unless you get first place at a push-up contest or something, then then they’ll give you like a three-minute phone call. That three minutes gives you so much relief and comfort and it’s like hope. It makes you appreciative of freedom, what freedom is and your ties with your close friends. It makes you think about it again.

ALEX CHUN: After his weeks of training at the military boot camp, Ben was repositioned to the Intelligence Agency.

BEN JUNG: It was cool because I knew wherever it was, it was better than the boot camp, so that’s pretty exciting. And there’s some cool military bases. And I got placed in a really cool one… the Intelligence Agency. I remember I was on a huge bus and we’re just going to the base. I had no idea what it looked like and everything but it was a tall building. The facilities are nice.

ALEX CHUN: Although he was done with the physical strain of bootcamp, working at the Intelligence Agency had different challenges. For many, this was their first taste of power in a way. As new trainees came in every month, those already serving slowly climbed the ranks.

BEN JUNG: Basically within the military, you get to taste having authority over people is, and you wouldn’t necessarily know what that’s like out in the real world because we were just students. Most of the time people misuse that sense of authority. There’s a lot of cases where just because you’re a higher rank and you have authority over them, they will make you do embarrassing stuff or things that are just not right, not humane. It gets bad. It gets really bad.

ALEX CHUN: Prabhav Jain, a Weinberg freshman from Singapore enlisted and served before his freshman year at Northwestern. He was placed as a Research Assistant at the Department of Justice and spent 22 months with the Singaporean army.

PRABHAV JAIN: So the regular term is 24 months. But luckily, I managed to pass the physical fitness test, so I only had to do 22 months.

PRABHAV JAIN: During those 20 miles, we’ll cross a river at some point. By cross a river, I mean you tie a rope, send one guy across the river with a rope and stuff, he ties the rope, and you all use the rope to swim through the river. It took 18 hours.

ALEX CHUN: After being promoted to sergeant, Prabhav and his men endured training activities together, occasionally overseas.

PRABHAV JAIN: For three weeks, I was in Brunei where we went to do survival training. Their rainforest there is a little bit denser than Singapore but a lot more wet. It rains really heavily like 12 hours a day every day. And then we also did two trips to Taiwan. Taiwan is a little bit more sparse in terms of vegetation, but it has really tall mountains. Climbing mountains is a lot more strenuous and tough than just walking in flat terrain, so that was the issue there and how to fight from across two peaks.

ALEX CHUN: For most of the men, sleep was scarce, particularly for overseas training. Many of the training exercises took place at night because that’s when the enemy would be most vulnerable.

PRABHAV JAIN: So of, what you do is you take this thing called a shell scrape, and it’s not a trench, but basically you dig a hole in the ground, which is just nice enough for you to lie down flat in it and the goal is that you can lie down in it such that when you’re lying down, you’re even with the top of the ground.

ALEX CHUN: For both Ben and Prabhav, one of the clearest memories is of their last day in the military.

BEN JUNG: After one year and nine months, I didn’t remember what being a civilian was like anymore. There’s so many thoughts going on like, “What’s it like to be at home again?” My heart was racing, so I couldn’t sleep. I was excited, but also so scared about life.

PRABHAV JAIN: At the end, you have a big parade. The colonel in charge of us salutes us to thank us for our service. And then that’s kind of it. You get to leave. You reclaim your life in a sense because you get granted so much freedom after having it denied for so long, and it’s like a world of endless possibilities in some sense. There’s no structure to it, which is a little daunting at first. It’s like what do I spend my time doing? I wish I could say it was hard, but it was one of the best days in my life.

ALEX CHUN: For Ben, the return to Northwestern was long anticipated. Now, the friends that he made during his freshman year are seniors.

BEN JUNG: When they saw me they’re like, “Wait, you came back so soon.” I just wanted to punch them ‘cause the two years felt like 10 years to me. But I feel like nothing’s changed. It’s two years of not seeing each other but then just after a week or something, it is back to how it was.

ALEX CHUN: While Ben was able to readjust to life at Northwestern relatively quickly, both he and Prabhav said their experiences in the military were undoubtedly impactful.

PRABHAV JAIN: Your body’s probably stronger than you give it credit for. You can go through a lot of shit. You will be okay. You will still keep on kicking. Now that I know what my limits are and that I surpassed my limits so many times, often you think, “There’s no way I can do that, no way I can walk.” Honestly you kind of can. It all seems like a very arbitrary example, you’re not gonna walk 20 miles in your life, but apply that to smaller things. It’s just good motivation so that you can do more than you think you can in some sense.

BEN JUNG: There’s a Korean term for people who come back from the military. It’s called 복학생 and it’s the idea that after coming back from the military, you change so much as a person. Because of that, lots of people don’t really find their time back at school fun anymore. And even in Northwestern, there are a couple of students who came back with me who came back with me and they are just struggling to just get back, or I don’t know if they want to get back to what they were during freshman year because they’re just changed so much.

ALEX CHUN: From the Daily Northwestern, I’m Alex Chun. Thanks for listening. We’ll see you next time for another episode of Defining Safe.

ALEX CHUN: This episode was reported and produced by me, Alex Chun. It was edited by Kalen Luciano and Heena Srivastava. The Editor-in-Chief of The Daily Northwestern is Troy Closson.