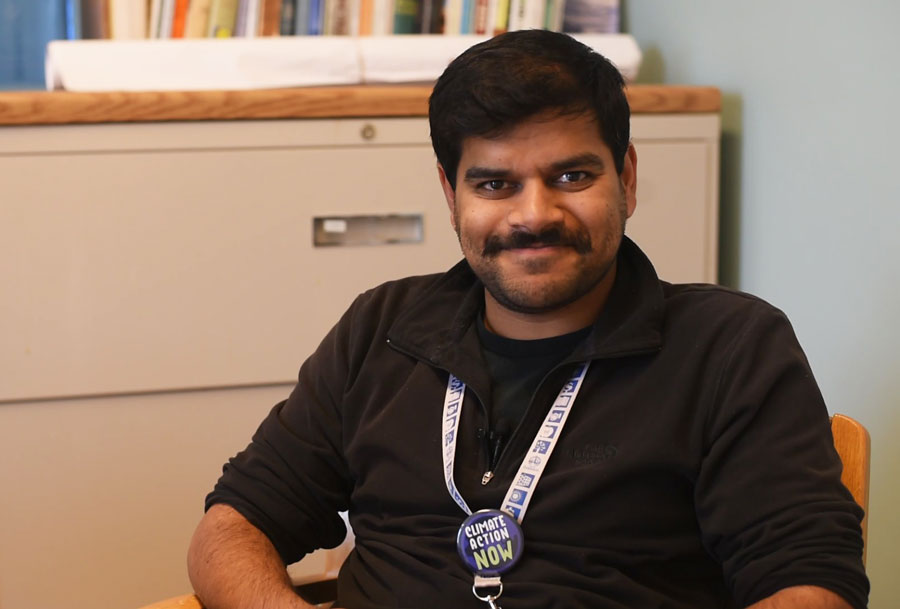 Evanston residents’ drive for climate action has been persistent for over a decade, Jensen said, and he and others feel the present moment will be critical for climate legislation.

“I feel really strongly, and I know some other people up here do as well, that 2020 is the year that we have to pass ordinances to make progress and fulfill commitments that we’ve made in this plan,” Mayor Steve Hagerty said. “They are big commitments here that put us sort of in the leading pack in this country, but a lot of work has to be done.”

In 2018, a large step was made with the council’s adoption of the Climate Action and Resilience Plan. Since then, a CARP working group, including Jensen and several community members, has been brainstorming ideas for implementation.

“This plan, or this announcement…it’s probably not aggressive enough,” Jensen said. “The things we’re going to talk about tonight may sound very aggressive, but the level of action required is quite stark.”

Jensen began his presentation with context about the climate crisis as a whole. In 2018, an international governing body released a report stating that there are 12 years to come up with a plan pertaining to the crisis.

There is evidence the Midwest is experiencing some of the changes already. According to an Environmental Law and Policy center report published last year, the increase of both precipitation and warming, and the decrease of wildlife diversity, can be attributed to the climate crisis.

Jensen explained that to truly prepare Evanston for the effects of climate change, it is essential they contend with new data, as there will be a significant amount of information available that may focus on a variety of different topics and projections.

“One of the things we have to be careful about with climate change is that the condition is constantly changing,” he said. “It’s really important that we be thinking and planning and reviewing things as we move forward.”

Along with preparing Evanston for the impacts of the crisis, Jensen outlined some of CARP’s other goals: achieving 100 percent renewable electricity by 2030 and achieving both zero waste and carbon neutrality by 2050. He said Evanston has already made a lot of progress in terms of emissions reductions, but there is still much to be done, including eight policies listed in the legislative agenda.

Among these eight policies were reducing emissions from large buildings, increasing access to universal compost and recycling and publishing guidelines for electric vehicle charging.

An environmental justice resolution has also been in the works since 2016, making its way through the Environment Board and the Equity and Empowerment Commission. It is set to be presented to the Planning and Development committee for discussion.

Following Jensen’s update, many aldermen expressed their support and gratitude for the work being done to combat the climate crisis.

“It’s really easy for people to just get overwhelmed,” she said. “But if all of us can find an organization or some kind of way to get involved and really feel that you’re contributing to addressing this crisis, I think that will energize all of us in a good way and help us all move forward to maintaining Evanston’s really strong leadership role in sustainability.”