Happily ever after in the Prairie State? Experts examine Illinois’ low divorce rates 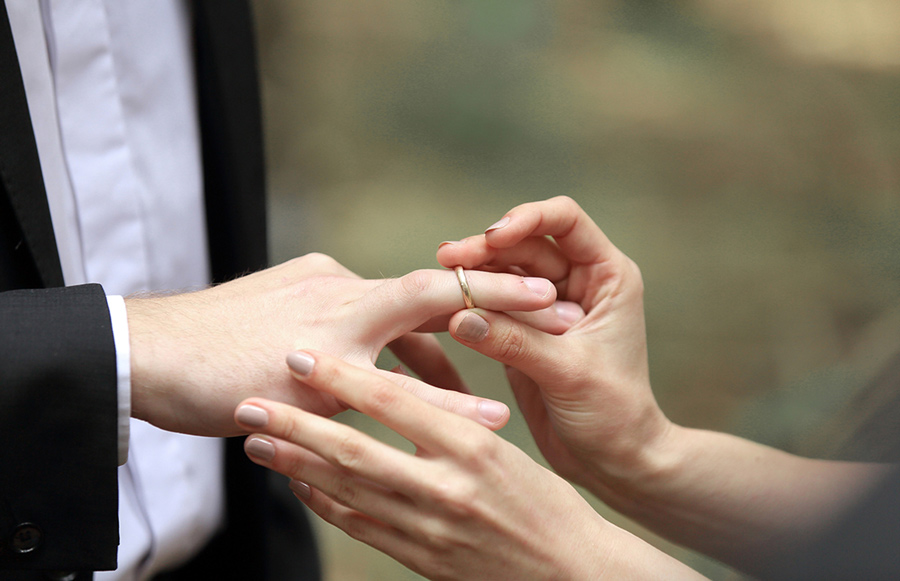 A person places a ring on another person’s finger. Illinois is one of the states with the lowest divorce rates, with around 6.6 percent of marriages ending in divorce.

Illinois may boast some of the lowest divorce rates in the nation, but think twice before you dub the state a lover’s paradise.

In Illinois, 6.6 percent of marriages end in divorce, according to 2018 United States Census Bureau data. Other states with notably low divorce rates include Hawaii, New York and Vermont. Arkansas tops the list as the divorce capital of the nation, with the state home to 17.14 divorced people per 1,000 married individuals.

Nationwide, it seems love isn’t everlasting: couples marrying for the first time in the United States have an approximately 50 percent chance of divorcing. Overall rates paint a slightly more promising picture, with the percent of divorced American couples hovering around 16 percent.

Joshua Stern, a founder and managing partner of the Illinois-based divorce and family law firm Stern Perkoski, said a couple’s decision to stay together often comes down to cost. In Illinois, divorce can come with a hefty price tag — according to the Berry K. Tucker & Associates, Ltd. website, Illinois ranks among the top ten states with the priciest divorce fees, which the Chicago-based family law firm estimates amount to around $13,800.

Accounting for factors like child custody and support, alimony, and property division, divorce fees can total upwards of $35,000. Financial problems are the primary contributing factor in 36.1 percent of divorces, according to a study conducted by the National Center for Biotechnology Information.

“People think a lot about the cash flow and when and where they’re going to see the kids,” Stern said. “Inevitably, if you get divorced, you’re now taking two incomes that are supporting one household and asking them to support two households. Usually, people see a drop in their available cash flow.”

Victoria Baum, a marriage and relationship counselor who formerly practiced in Evanston, said “there’s no simple answer” to explain the state’s low divorce rate. The popularity of cohabitation — an arrangement in which an unmarried, romantically-involved couple lives together — may deflate Illinois’ divorce rate. In the state, less than 65 percent of people older than 15 years old are married, according to 2017 American Community Survey estimates.

The age at which couples marry and have children may also explain their marriages’ longevity. In Illinois, men get married at an average age of 30, and most women tie the knot at around 29. Twenty years ago, the average man found himself hitched at 26.8, and the average woman at 25.1.

Maturity may play a role: Couples who marry and have children later in life tend to be more financially secure, and, as a result, bicker far less about money matters, according to Spring Tree Counseling licensed marriage and family therapist Farrah Walker.

“Older couples have had that time to develop a shared idea of what they want their marriage to look like,” Walker said. “Having kids automatically creates strain on relationships; it’s less strenuous when your relationship has had longer to develop. You’re getting married older in a different stage of life. You had time to develop some of those habits in a relationship prior to having kids.”

Aside from delaying the big day or choosing to forgo it altogether, what else can couples do to ensure nothing but death does them part? Evanston-based licensed marriage and family therapist Tom Hammerman said long-lasting marriages are often characterized by open communication, which couples therapy can facilitate.

“The role of couples therapy is that I get people to be able to have conversations in a way they’re not able to do on their own,” Hammerman said. “How people talk in relationships and how they communicate with each other makes a huge difference.”

Still, there’s no guarantee Illinois couples are certain to live happily ever after. Understanding the Prairie State’s low divorce rate comes down to “sociological, not psychological” factors, Baum said.

Ultimately, chalking up the low rates to marital harmony is “a case,” Baum said, “of rose-colored glasses.”