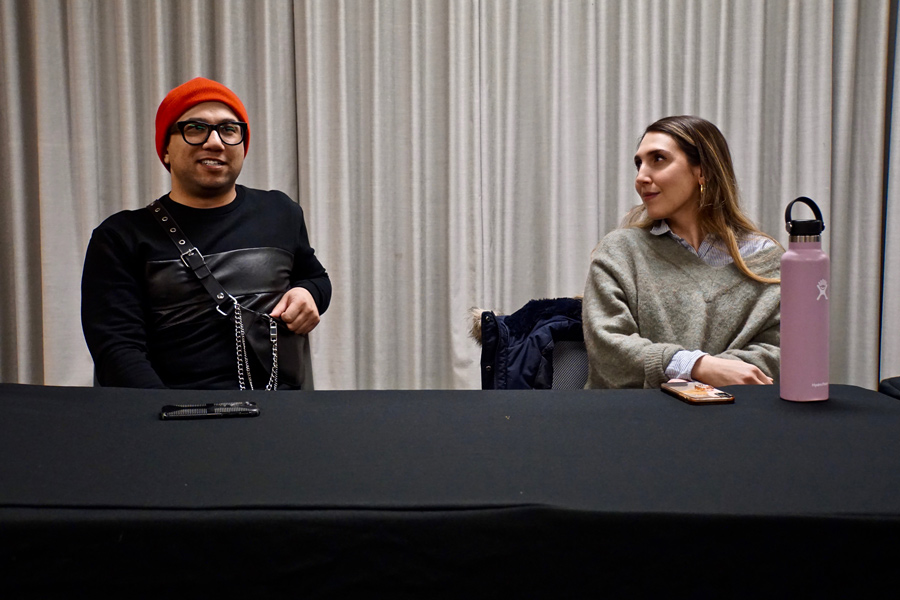 Professor Ray San Diego and Ashley Kraus spoke at a panel about gender in the fashion industry. The panel was hosted by STITCH Magazine in advance of their next issue about sex, which comes out on Feb. 28.

In advance of its next issue exploring sex and gender in fashion, STITCH Magazine hosted a panel in Norris University Center on Feb. 25 discussing how the role of gender and sexuality relates to the fashion industry.

“We really wanted to think about the range of voices and identities we are presenting, specifically allowing people to define themselves rather than letting the mainstream, often white, patriarchal ideal define other people,” STITCH director of corporate and Weinberg junior Emily Wang said.

The panel featured Ray San Diego, a professor in the Asian American Studies Program, and Ashley Kraus, a postdoctoral researcher at the Feinberg School of Medicine.

They covered topics such as the impact of the fashion industry and the media on body image, including how both individuals’ interactions with the media and each other influence how they view themselves. The speakers said years of socialization have taught individuals how to behave and carry themselves in society, which then influences how companies sell products to consumers.

“It’s not even just about the clothes themselves but how we’re positioned in these marketing pieces. We’re seeing this now on how people position themselves on Instagram,” Kraus said.

The panel began with questions from STITCH staff members, but was then followed by a question and answer session with the audience.

One major theme of the event was how the industry will change now that some of issues, especially regarding minority representation and inclusivity, have become more recognized, even though progress still needs to be made. The panelists discussed the power of the fashion industry to both perpetuate current norms while also changing the narrative.

“The fashion industry has great power to break down gender boundaries, but are sometimes working very hard to propagate these norms,” Kraus said. “It’s sort of a double-edged sword. If they really took responsibility for how they portray different trends, (they) could really change things.”

San Diego and Kraus also discussed the way trends simultaneously empower individuals who may not have seen themselves represented in more “mainstream” advertising or fashion brands, while also taking a look from streetwear, which can mean profiting from ideas that others may have created before.

“In some ways, it’s exciting, it’s cool, hopefully some kid isn’t going to get bullied for wearing pink or something,” San Diego said. “But at the same time, it’s like, someone is making a lot of money that someone else could have been doing first.”

Ultimately, panelists agreed that in order to make change in the industry, people need to continue having conversations about issues surrounding inclusivity and diversity, both in media and in fashion brands themselves.

“Two steps forward, one step back is still progress,” Kraus said. “The more people are having these conversations and are aware, the better it will be.”

Consumers also have to remind themselves that these “pervasive” and “repetitive” beauty norms, as San Diego said, are all constructed.

Both panelists also said that while there is still improvement that needs to be made, the progress that has been achieved thus far should not be ignored.

“It may not be ideal or perfect at first, but any step forward is better than staying still,” San Diego said.