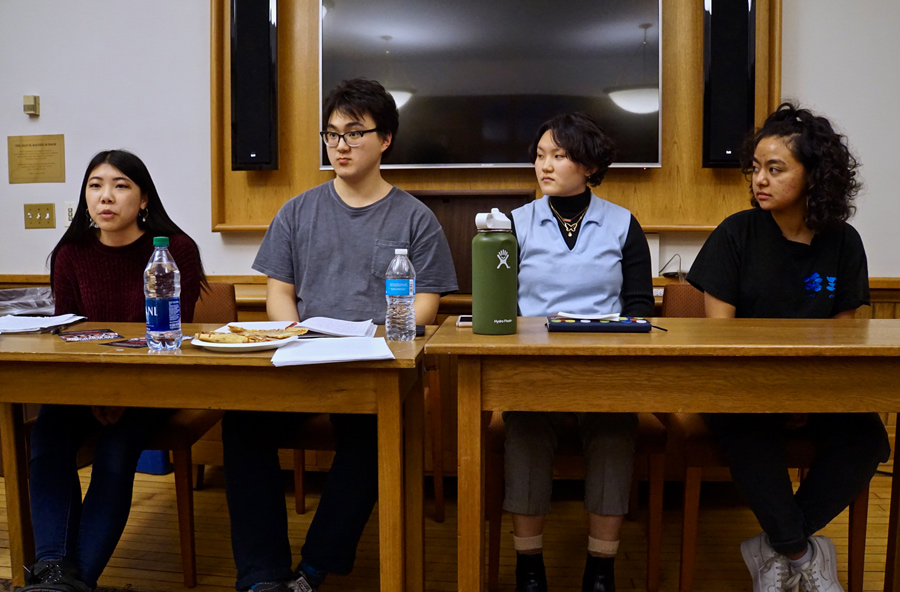 The Asian American Studies Program hosted a Community Arts and Activism Student Panel on Tuesday at University Hall, featuring four undergraduate students who are involved in the program.

Each of the students on the panel shared their experiences within the community working in social justice or the arts. The event was organized by the director of undergraduate studies in Asian American Studies Patricia Nguyen and history prof. Ji-Yeon Yuh, who both were at the event.

“It’s really important to center student voices, especially in the current political climate that we live in, to think about students and their own agency, power and how they can utilize the resources at this university for social justice,” Nguyen said.

SESP senior Lillian Guo, the first on the panel to speak, described her summer internship with KAN-WIN, an organization dedicated to eradicating gender-based violence. Guo was one of two recipients of the Asian American Summer Community Fellowship, which gave her a $4,000 grant to work within the Asian-American community.

Guo said KAN-WIN differs from other domestic violence agencies that don’t have the capacity to serve all communities. KAN-WIN has a largely multilingual staff and tries to serve the needs of immigrants, those who are undocumented and people who don’t speak English as their first language.

“They are Chicago-based, and most of their clients are from the Chicago area,” Guo said. “Part of that just means having connections to the Asian-American community in Chicago and understanding what are those specific cultural norms or expectations within your community that make it difficult for survivors of gender-based violence to report or to take action against their abuser. That’s why this specific organization is so necessary.”

Panelist William Paik spoke about his experience within standup comedy. The Weinberg senior said unlike other areas of interest, there was a problem with the lack of existing pathways to get his career off the ground. Paik began doing standup as a way of building an infrastructure of connections for himself.

Paik also received the community fellowship and spent his summer working with Stir-Friday Night!, an Asian American comedy group in Chicago. Paik received grants to fly to Los Angeles to be a part of “Crazy Funny Asianz,” where Asian-American comedians performed in front of network television producers, and to go to the first annual Asian Comedy Festival in New York City.

“I just enjoyed sharing everything that I learned in the last eight months,” Paik said. “I feel like if I were a sophomore or a first-year, I would definitely like to know what’s possible at this school and what you can do. You want to give something to people that moves their lives in a good direction.”

Weinberg second-year Abbey Zhu heard about the panel through a Facebook event and through a weekly Asian American Studies newsletter. Zhu said she felt like the panel was good for community building and demonstrated some of the support networks provided by the program.

As an Asian American Studies major, Zhu said that she was happy to see the work her friends and peers were doing within the Asian-American community.

“To see the room so full of people that I’m familiar with and are involved in the program, but also other folks was really amazing because that many people are invested in what these students are doing and what Asian American Studies is about,” Zhu said. “That’s really exciting.”

– After 20 years in the making, faculty submits proposal for Asian American Studies major