Women’s Basketball: No. 18 Northwestern picks up seventh win in a row versus Wisconsin 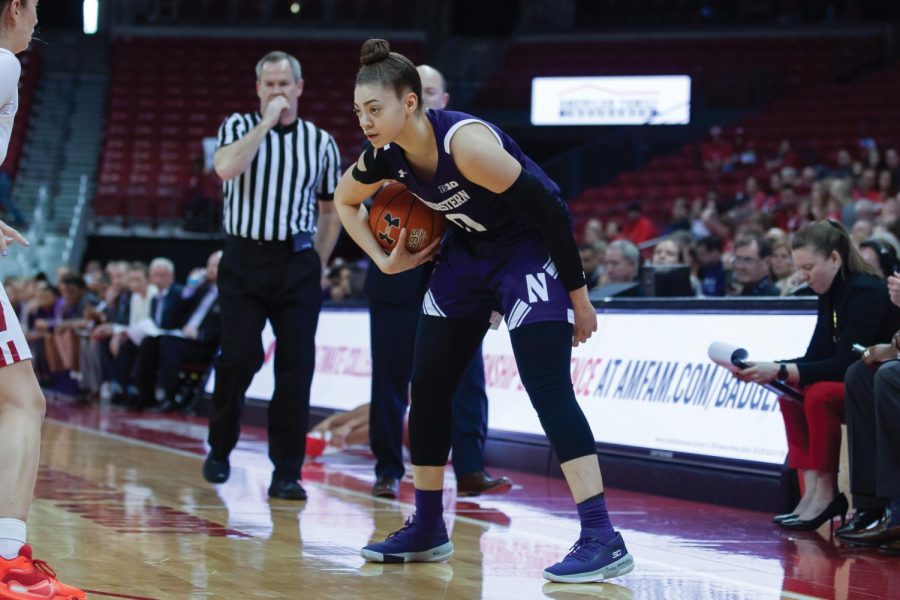 Lindsey Pulliam makes a move. The junior guard led all scorers with 28 points in NU’s win over Wisconsin.

Another day, another win.

A 16-0 fourth-quarter run and another show-stopping performance from junior guard Lindsey Pulliam fueled No. 18 Northwestern to its seventh straight win of the season in a 82-66 takedown of Wisconsin in Madison on Saturday.

The victory tied the program’s record for most wins since 1980 — set during the Big Ten title-winning 1989-90 season — and pushed the Wildcats (24-3, 14-2 Big Ten) back into a tie for first place in the conference with No. 7 Maryland. NU and the Terrapins each have two games left to play.

“A hard-fought game, what we expected,” coach Joe McKeown said. “Wisconsin has played everyone in the league tough, especially the teams that are in the upper echelon. I thought we really responded at halftime.”

Pulliam led all scorers on the afternoon with 28 points, shooting a season-best 13-for-20 from the field. Her 65 percent from the floor was her highest since a Dec. 4 game against Boston College, and tied the second-best shooting performance of her career, dating back to a Nov. 30, 2017 loss over Syracuse as a freshman.

“(It’s) just being aggressive, honestly, and trying to get to the spots that I like on the floor,” Pulliam said. “My teammates have done a great job of getting me the ball when I’m open.”

With an early 11 a.m. tip-off time, NU started the game slowly, shooting a lowly 35 percent from the field and keeping it close with the 12th-place Badgers (11-17, 3-14). Wisconsin kept it close in the second quarter, building a four-point lead at one point, but then Pulliam and Burton started to find their rhythm.

The backcourt duo combined for 22 of the Cats’ 37 first-half points.

The Badgers hung around for much of the third, keeping the deficit within one midway through the quarter. But NU pulled away near the end, and Pulliam hit a jumper with just over a minute left in the frame to put the Cats up by 7 heading into the fourth.

“We started getting loose balls that Wisconsin had gotten in the first half,” McKeown said. “We started to rebound better, and then we got in transition and made the extra pass. A great team effort.”

Wisconsin scored to open the final quarter, but then NU grabbed onto the momentum and kicked off its 16-0 game-sealing run. In just over three minutes, the Cats hit a handful of long jumpers and turned three Badgers turnovers into points to build their lead up to 21.

The win marked the fifth time in seven games that NU has finished with more than 80 points.

“We share the ball better than anybody and we know what everybody likes to do on the floor,” Pulliam said. “So it’s easy for us to do what we want to do, and just play how we want to.”