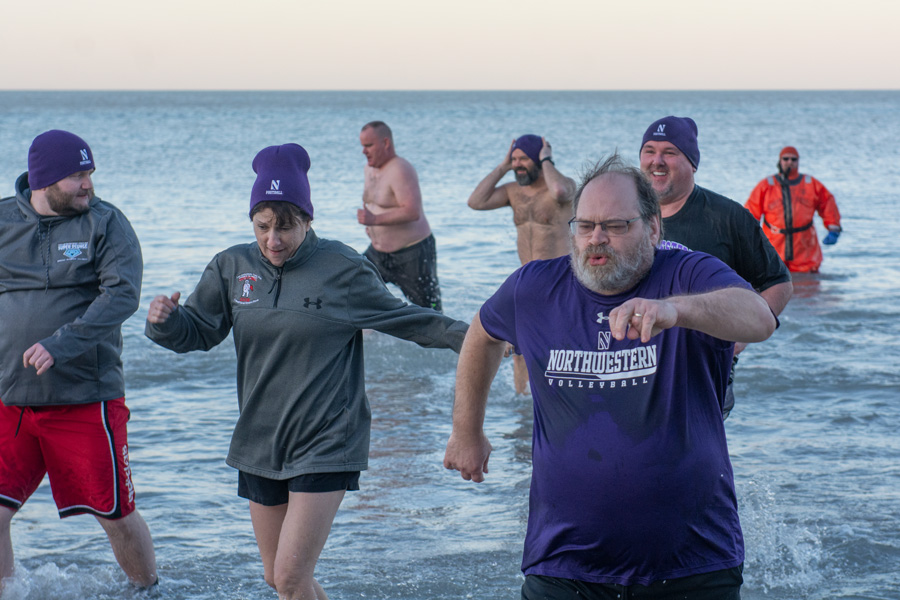 Participants in the Illinois Special Olympics Super Plunge run out of Lake Michigan after completing their fourth of 24 jumps into the lake. Approximately 55 people raised money and awareness this weekend for the organization through the event.

For most people, the idea of jumping into the 37-degree waters of Lake Michigan in the dead of winter is absurd, much less the idea of repeating that process hourly for 24 hours.

But 55 participants in the Special Olympics Illinois Super Plunge braved the near-freezing temperatures as they raised money and awareness for Special Olympics athletes. The event kicked off over a month of Polar Plunges state-wide, during which people jump into cold water in support of the organization.

From 2 p.m. on Friday to 1 p.m. on Saturday, plungers jumped into Lake Michigan on the hour, every hour, at Northwestern’s Lincoln Street Beach. Jim Fitzpatrick, the senior director of development for the Illinois Law Enforcement Torch Run, which sponsors the event, said it’s important to have proper safety precautions in place and create ideal conditions between jumps to ensure plungers can enjoy their experience as much as possible.

“It takes a lot of people and a lot of partnerships to make this happen, particularly with Northwestern University and the City of Evanston,” Fitzpatrick said. “And it’s not easy. You’re jumping in Lake Michigan once an hour for 24 straight hours, so that’s a special group of people.”

Super Plunger Delaney Bethel has been participating in the event for 10 years — her first time being at age 6, when she did the regular Polar Plunge. The Wheaton North High School junior said she has done the Polar Plunge twice and the Super Plunge eight times, though she didn’t stay through the night her first three times. She was 11 the first time she made it through all 24 jumps.

Bethel said she has been passionate about the event and the cause since she joined, and is thankful for the impact of the money attendees have raised.

This year, the Super Plunge featured a Northwestern-themed hour for the first time, with members of the school’s football team and assistant volleyball coach Kevin Moore participating in the 5 p.m. plunge. The hour was coordinated by three-time Super Plunger Robbie Peterson. He said he appreciated the school’s support of the event, both in allowing it to take place on Northwestern property and in having members of the community attend for an hour.

Peterson said he first found out about the Super Plunge from his plunge leader. Each year he’s participated in the longer event, the first plunges have been the easiest, as he’s been excited to participate. The fatigue, he said, sets in during the night jumps.

“You start getting colder and you’re starting to get sleepy,” Peterson said. “The adrenaline’s running out, and it’s time to go out there again. The ones in between that two and four o’clock hour are the hardest, but once the sun starts coming up, you hit that second wave, and we’re back at it again.”

Occasionally, participants will do two consecutive jumps at the hour mark, to allow for a longer break between jumps. In the extra time, Peterson said plungers will often try to catch some sleep as the tent quiets down.

However, as the last plunge draws closer, Peterson said he is reminded of the reason he participates, which brings him back each year.

“It’s a sense of accomplishment, because we’re able to do all 24,” Peterson said. “You challenge yourself to do it, and when you complete it, it’s always nice to know that you finish something you started.”