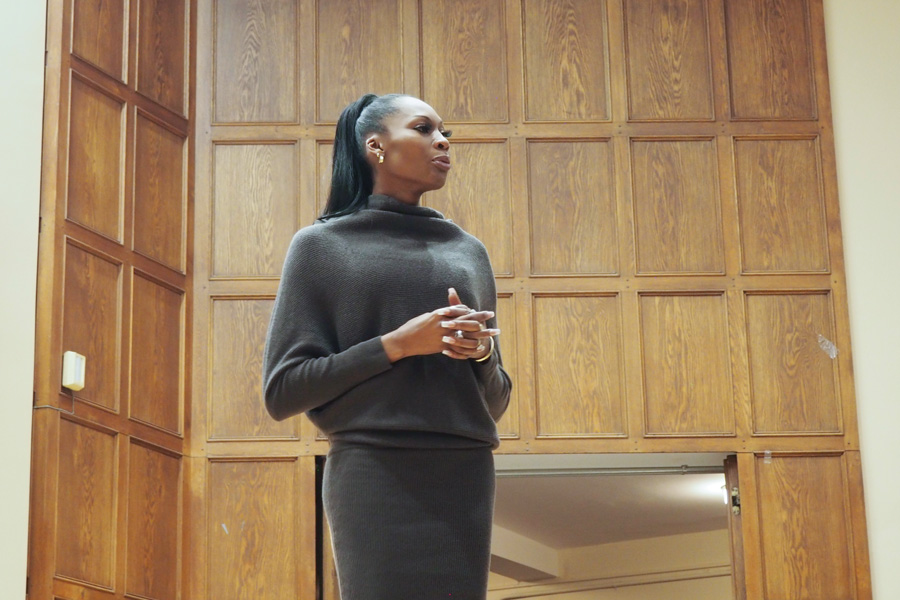 Standing in Lutkin Hall at For Member’s Only’s 2020 State of the Black Union, actress and author Dominique Jackson said she knew she wanted to work with Ryan Murphy, the “American Horror Story” showrunner after watching the third season.

In “American Horror Story: Coven,” a character is burned at the stake while shouting, “Balenciaga!”

Less than ten years later, she starred as Elektra Wintour, a former house mother and champion of the ballrooms, in “Pose,” an Emmy-winning series written by Murphy on the ballroom community, set in 1980s New York City. For Members Only invites a speaker for the State of the Black Union address that engages Northwestern’s black community in discussion.

At the event, moderated by African American Studies prof. Alexander Weheliye, Jackson told the audience she was raised in Trinidad and Tobago then immigrated to the United States before graduating among the top of her class. She said she left her religious mother who did not accept her identity.

Jackson competed in the NYC LGBT Entertainment Circle and the Pageantry System and was inducted into the House and Ballroom Hall of Fame in 2016. She starred in the modeling reality show “Strut” and also wrote an autobiography, “The Transsexual from Tobago (Revised).”

Jackson also spoke about New York City’s ballroom cultural movement founded by African American and Latinx LGBTQ youth. Ballroom culture celebrates individuals in communities of color of genderqueer, transgender and non-conforming identities in expressing in drag, art and fashion, and members of the community should support one another, she said.

“No one has realized that humanity as our foundation would solve a lot,” Jackson said.

NU alum Emily Feng (Weinberg ’19) said she attended the event because she saw the event in the Multicultural Student Affairs newsletter and wanted to be in a space where many conversations and discussions occur, something she said she missed since graduating.

“I think it’s super important because it’s about building power from within your own community,” Feng said. “Being able to learn from their stories (and) experiences and get that sense that, ‘if they were able to do this, we can also.’”

Events like this, she said, help students of marginalized identities learn from experienced professionals from their own community as well as gain solidarity. It helps people feel like they can be themselves, she said.

Weinberg freshman Shira Nash said she attended the event because she watched “Pose.” She said that Jackson’s talk resonated with her as it was easy to judge people before seeing them in their humanity.

“It definitely raises awareness and allows space for people of color to come together and also people who are different from the majority to come together and feel safe, and see someone who is also working toward the same goal as them,” she said. “I think that’s really important.”

– Black representation in music discussed during State of the Black Union