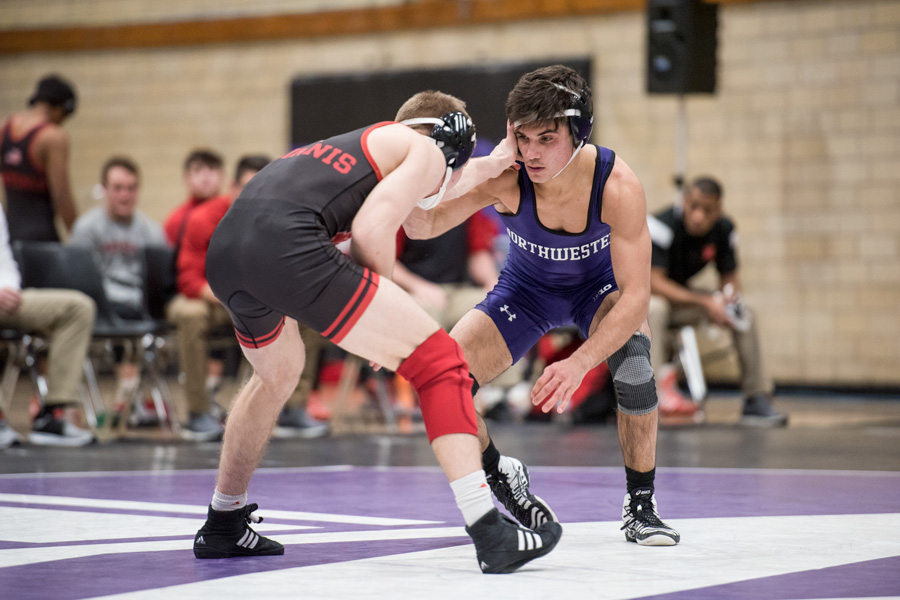 This season, no win has come easy for an injury-riddled Northwestern in college wrestling’s toughest conference. However, the Wildcats have a chance to return to form as the home stretch of the season approaches.

The Cats won eight of ten matches against the Terrapins, including all five of NU’s nationally ranked wrestlers. Coach Matt Storniolo believed the win would give Northwestern momentum heading into the Big Ten Tournament on March 7 and 8.

“You want guys going into the Big Ten Tournament with confidence,” he said.

The major storyline of the match was the return of star Sebastian Rivera, ranked No. 5 in the 133 lb class. Rivera had not played since losing by injury default on Dec. 29 at the Midlands Championship. Storniolo said that Rivera’s return was a boost for the Cats.

“Having a guy like Sebastian in the lineup, a high-octane caliber of competitor, is gonna give residual effects throughout the lineup,” he said.

Storniolo added that injuries have plagued NU throughout the Big Ten season — he says they’ve been a major factor for the Cats’ poor conference form.

Even with the Wildcats’ struggles, there have been several bright spots in the lineup. The first is junior Ryan Deakin, ranked No. 1 in the 157 lb class with a 17-0 record. Deakin handily defeated highly ranked wrestlers throughout the season, including No. 7 Kendall Coleman of Purdue and No. 9 Will Lewan of Michigan. Deakin has taken his wrestling to an even higher level than his sophomore season, when he finished 31-7.

Storniolo said Deakin’s continued success has been due to a number of factors.

“His attitude coming into workouts, the effort, there’s no one thing with Ryan you can put your finger on to give credit for the success and consistency he’s brought to this season,” Storniolo said. “Outside of the practice room, he’s living the way a top competitor should be living.”

In addition to Deakin, Storniolo highlighted the work of senior Shayne Oster. Oster moved to the 165 lb class this season from the 149 lb class, and has vaulted himself to the No. 17 ranking in the country. Oster won eight of nine matches during the Big Ten Season, and has been a surprise success story during NU’s injury-riddled season.

“Shane has been a model teammate,” Storniolo said. “It’s motivating to the guys on the team, it’s inspiring for the coaching staff. Shane sets the gold standard for how to use all seven minutes of a wrestling match.”

The Cats face off against SIU Edwardsville (2-13, 0-9 MAC) this Sunday in their final match of the season before the Big Ten Tournament.

Storniolo said the team did “not just expect to win the match, but to get the most out of yourself. To push yourself, to find the best version of you, before we go out there and really test ourselves at the conference tournament.”