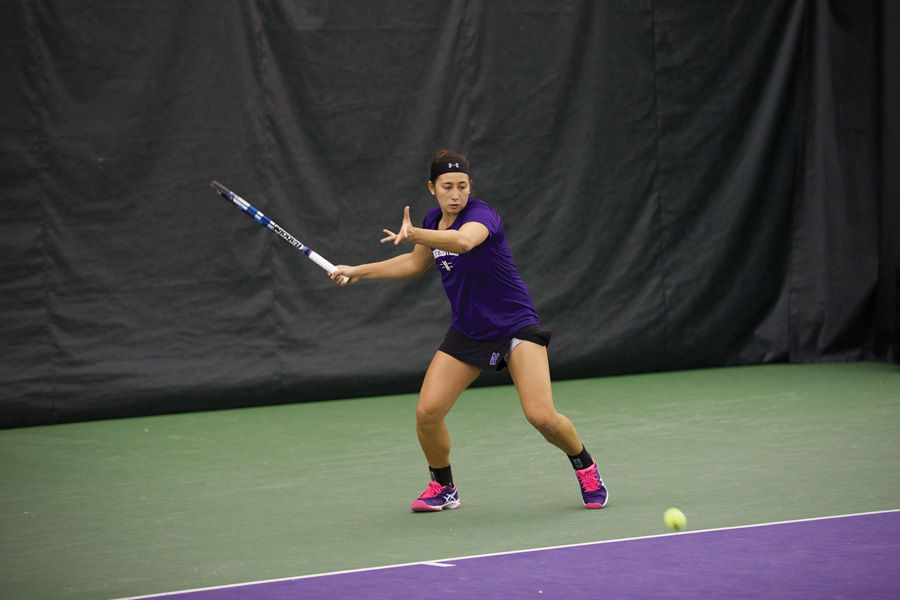 Junior Inci Ogut chases the ball. Ogut helped the Wildcats to a doubles victory over UIC.

With only one more match until the start of the Big Ten season, Northwestern women’s tennis (3-4) started to gradually gain momentum with its third win of the season but continues to struggle against ranked teams.

The Wildcats returned to Combe Tennis Center for two matches on Sunday, following a close win against No. 32 Notre Dame. While NU was looking for its first back-to-back wins, the team split its matchups to maintain a losing record, falling 4-2 to its first opponent, No. 17 Georgia Tech — a team with four nationally ranked players in its lineup — before sweeping the University of Illinois at Chicago 4-0.

During singles, the Cats’ luck ran out, as they lost four of five completed singles matches. While the Yellow Jackets won by a large margin, NU almost scraped up the third and fourth singles matches, which both dragged on for three sets. Clarissa Hand lost to Cohen 7-5, 3-6, 6-1, and Pozo fell to Otsuka 6-4, 2-6, 6-3.

Only a few hours after their first match, the Cats bounced back against the Flames with an unconventional win. To reduce the length of the match, NU and UIC agreed to follow an abridged format for their match called “clinch/clinch” where once the doubles point is clinched, the rest of the doubles matches stop. Afterwards in singles, once the team match has been clinched, the remaining singles matches stop too.

Senior Julie Byrne and junior Inci Ogut defeated UIC senior Karyna Bihel and freshman Izzy Marshall 6-4 to pick up the doubles point. In singles, only five matches took place instead of the usual six due to the Flame’s lack of healthy players, automatically giving the Cats their first singles win. NU picked up its second singles win when Byrne won her match 4-0 after her opponent retired, and Pozo also redeemed herself with a quick 6-1, 6-1 win gainst UIC junior Georgia Gulin to claim the match for NU and end the night on a high note.

This weekend, the Cats face Baylor in their last match before the start of the Big Ten season. If they beat the Bears, that’ll be their first consecutive win and potentially help the team find a rhythm before facing Indiana in two weeks at the Combe Tennis Center.