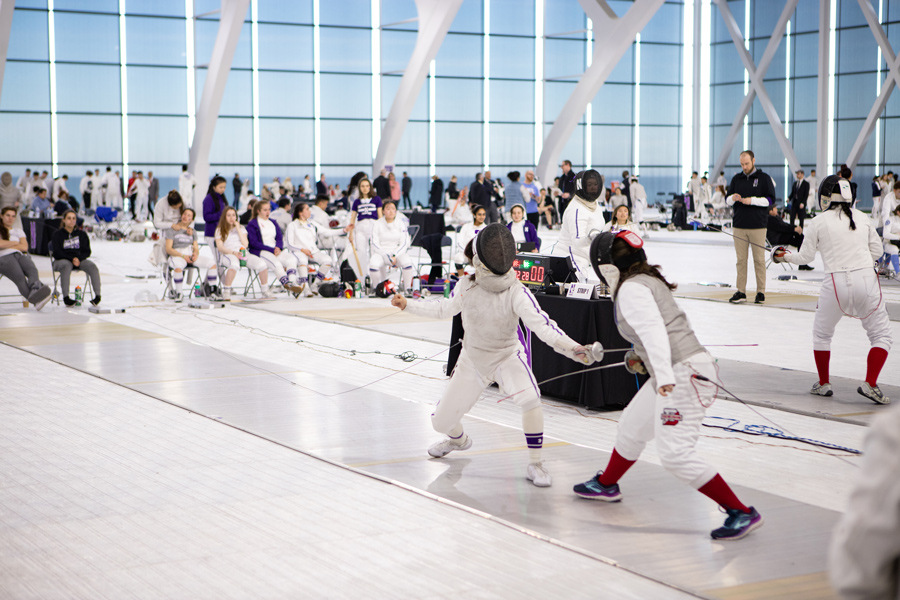 Throughout the season, No. 9 Northwestern battled against some of the best programs in the country as a team. But last weekend in Columbus, Ohio, the Wildcats sent only two fencers to face off individually against some of the top athletes in the sport.

At the Junior Olympics — a tournament reserved for fencers 20 years old or younger— sophomore Abigail Swallow finished 35th in the sabre event, while freshman Celia Crompton took 93rd in the foil event.

Coach Zach Moss was pleased with the performances of Crompton and Swallow, who attended the competition to prepare for postseason play.

“They fenced really well,” Moss said. “The real goal of the tournament was for them to get experience and get comfortable working on their fencing. I saw a lot of growth from them and development within their fencing.”

At the Junior Olympics, fencers began the tournament by facing off against six competitors in pool play. Facing opponents in five-point bouts — as in a normal tournament — Crompton and Swallow both flourished, as the freshman went 4-2 and the Seattle native went undefeated.

Crompton and Swallow then advanced to the elimination bracket, where they faced opponents in 15-point bouts.

Swallow — after a bye in the first round thanks to her 6-0 record in pool play — won her opening bout 15-10. But the sophomore lost by the same score in the Round of 64 to Vera Kong of the Laguna Fencing Center.

The sophomore, who was three places away from receiving national ranking points, was happy with her pool performance and credited her loss to the fact that Kong didn’t perform as well as expected in her pool. She added that the tournament helped her get into a postseason mindset.

At the Junior Olympics, which is filled with young and skilled talent, NU’s fourth-year head coach spent most of the weekend trying to recruit fencers to NU, enabling assistant coach Eric Momberg to give tactical advice to Swallow and Crompton instead of Moss.

This weekend, the Cats will travel back to Columbus to begin postseason play at the Midwest Championships, an event NU has won for two straight years. The tournament starts with individual play on Saturday before moving to team play on Sunday.

Moss said NU hopes to defeat No. 4 Ohio State — a team the Cats have fallen to twice this season 14-13. He said NU is capable of beating the Buckeyes because each weapon has won at least one match against Ohio State this year. To obtain their third Midwest Championship title in a row, Moss said the Cats must “be dis ciplined and fight very hard and be the most consistent versions of ourselves.”

Fencing in her final Midwest Championships, senior epee Shirley Luong hopes the event will end on a high note.

“I definitely want back-to-back-to-back championships,” Luong said. “But no matter if we win or not, this is a great celebration of our team and the culmination of all the hard work we’ve put in.”