Tekriwal: To be truly progressive, Gen Z needs to acknowledge its heteronormativity 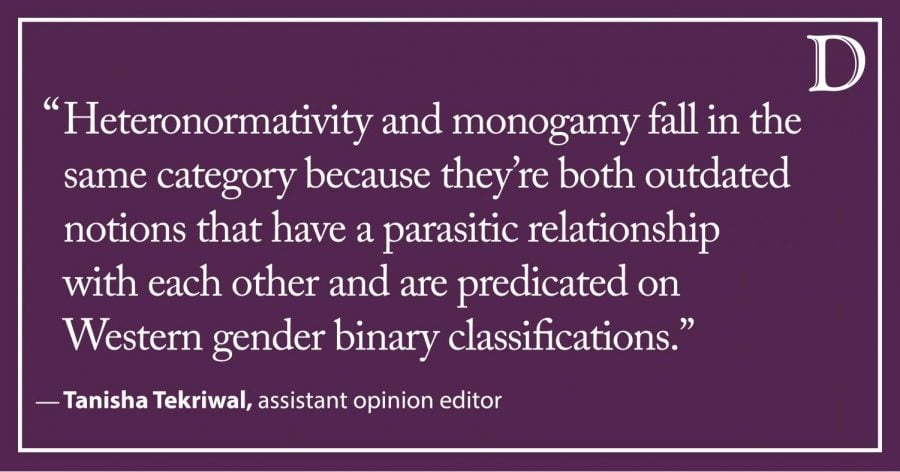 I’m tired of hearing things like “I support the queer community, but don’t want my partner to be bisexual.”
Though I always venture to argue that Gen Z is more progressive than its older counterparts, that is often true only statistically. Relative progress is not enough progress. Just because we are collectively attempting to undermine social constructs of race, gender, patriarchy, organized religion and others does not mean we are individually immune to the less explicit and more insidious forms of these very institutions.
Remarks like that always infuriate me, and I have to teach myself patience because exasperation doesn’t help nip these malignant tropes in the bud. So for the hetero women out there saying that — hetero men, I’ve noticed, tend to fetishize rather than ridicule same-sex tendencies — know that you are complicit in furthering stereotypes.
I suppose what one means through a statement like that is that they prefer ‘Masc’ behaviour rather than ‘Fem’— which I respect and can accept. However, assuming that all bisexual people project the latter or that discovering someone’s sexual orientation would change the way you see them is not a personal preference; it’s simply a prejudice I cannot respect or accept.
Look around a room and definitively identify a stranger’s orientation or pronouns. You might have a lucky guess, but the truth is, you can’t tell something like that. And by trying to, you’re playing into heteronormative ideology because you’re boxing people into what you think are definable categories of who’s queer and who isn’t. Yes, there are stereotypes of what gay or lesbian people act like or are supposed to act like, but they’re stereotypes for a reason. Androgyny means nothing that its bearer doesn’t want it to — there is no such thing as “gay behavior” or “straight behavior” — only stereotypes.
One of the biggest demands the LGBTQ community and their allies are making is asking people to realize that personality is in large part unaffected by gender identity or sexual orientation. They are not a break from the heteronormative “default,” but very much part of everyday and our “normal.” If you liked someone when they were or you thought they were heterosexual, and suddenly don’t when you learn they’re bi/pansexual or non-binary, you’re doing exactly what Gen Z is always accusing boomers of: not supporting people and their choices.
The second most common thing I’ve heard along this tangent is the outright attack on non-monogamy, the umbrella term for polyamory and open relationships. The reason heteronormativity and monogamy fall in the same category is because they’re both outdated notions that have a parasitic relationship with each other and are predicated on Western gender binary classifications.
Just because you don’t want to or are too insecure to be in a polyamorous relationship does not give you the license to judge someone else’s choices. For all those harping on “disloyalty” and “unfaithfulness,” polygamy is not cheating, just the way a threesome is not cheating. How relationships work is that people agree on a common ground, and all parties willingly participate. If you don’t understand how going behind your partner’s back is not the same thing as this healthy agreement, I cannot help you — though some common sense might.
There was a time when homosexuality was punishable — in many parts of the world it still is — and many of the ones who went along with these schemes of oppression have now changed their tune, which is okay. It is better to accept one’s mistakes and grow than to hold onto one’s ego. Be apologetic if you couldn’t be ahead of the curve, but do not blame your shortcomings on your circumstances. “A product of my time” is just a euphemism for “unable to think for myself.”
The truth is we are all guilty of living comfortably in an age of state-sponsored monogamy and state-sanctioned erasure of identity on an unimaginable scale, both of which are closely tied to the institution of colonialism. Forced assimilation along a variety of tangents has long been the lifeblood of pervasive European institutions of governance and living. Many don’t know or ignore how entrenched the gender binary is in the enduring imperial trajectory and the white male dominance it has birthed. And we all know how well that story is doing.
Tanisha Tekriwal is a Weinberg freshman. She can be contacted at [email protected] If you would like to respond publicly to this op-ed, send a Letter to the Editor to [email protected] The views expressed in this piece do not necessarily reflect the views of all staff members of The Daily Northwestern.