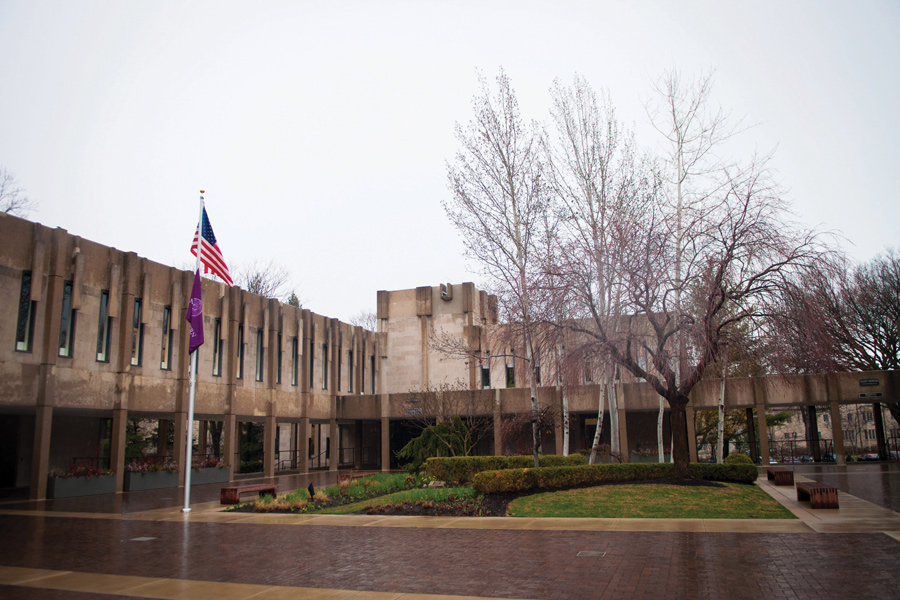 The Graduate School. Queer Pride Graduate Student Association is a community for LGBTQ students at Northwestern.

When Addie Shrodes first came to The Graduate School at Northwestern, she was already looking for spaces where she could meet other LGBTQ students.

The Queer Pride Graduate Student Association soon became her home, as it has for over 400 graduate students. Founded in 2005, QPGSA is involved in advocacy as well as academic, social and service-based efforts to assist Northwestern graduate students.

“It’s easy to feel isolated in graduate school, and it’s also easy to feel like you’re never gonna accomplish what you want to accomplish,” Shrodes, the QPGSA president, said.

As an active member of the group for the past three years, Shrodes worked on organizing Queertopia, a graduate student-run academic conference focused on Gender and Sexuality, as well as advocacy and collaborative efforts with other affinity-based graduate student organizations.

Her work at QPGSA has given her a sense of pay-off and solidarity beyond her daily life and academics at Northwestern.

“It just felt like, ‘Wow, we’re doing something together that we couldn’t have done alone,’” Shrodes said.

The first Queertopia event she helped organize in 2018 saw the biggest turnout in the event’s history, bringing in 75 attendees from across the country.

Since then, the event has attracted upwards of 100 delegates, enabling dialogue between graduate students and practitioners who are working in the field of LGBTQ empowerment.

“It’s thinking about the connections between research and practice,” Shrodes said, “and wanting to create a space where we can talk across what are often constructed as silos within the academy.”

Erique Zhang, the advocacy chair of QPGSA, had been involved with LGBTQ activism before their involvement with the organization.

Zhang was a member of the Gender-Queer, Non-Binary Transgender Task Force, a group that made recommendations of immediate actions for the university to take to support its non-binary population.

Despite the completion of the task force’s report in October, it was released by the University on Wednesday.

“The University will drag its feet when there’s no pressure on them,” Zhang said. “That’s why we’ve been trying to make relationships with specific offices and people who are willing to be our allies.”

Matthew Abtahi, assistant director for Multicultural Student Affairs who works with the LGBTQ population, is a part of those efforts.

Abtahi said organizations such as QPGSA are born from a need to build community, but eventually foster advocacy-based discussions and fulfill activism-based roles in addition to social ones.

“This collective of voices allows people to realize that the experiences they’re having are not actually singular but rather systemic issues that haven’t been addressed,” Abtahi said.

The lack of all-gender bathrooms across campus is an issue QPGSA is trying to help resolve. The issue came to light in QPGSA’s survey of nonbinary students, which is published on the group’s website.

Zhang described the case of a survey respondent who was a graduate student tasked with successive hours of TA duties in a building without a gender neutral bathroom. Waiting until a break between classes led them to developing a UTI, Zhang said.

Though some wanted to map out the bathrooms on campus, Zhang was concerned over expending student labour to carry out such a task.

“Part of my worry about advocacy efforts is that making students do all the work is not a fair way to do advocacy,” Zhang said.

Abtahi said he sees his role as collaborating with students to bring about justice, and that each individual or group plays a different role in creating positive change.

“I dream of the day when students don’t have to do that work,” Abtahi said, “and I know that our continued dedication toward that will eventually get us there.”

Correction: A previous version of this story used the incorrect pronouns for Erique Zhang. The Daily regrets the error and is committed to continuing to ensure our reporters are asking all sources’ for their pronouns.