“Change is a slow, long process and we took a step in the right direction”: ASG votes to reduce senate seats, discusses representation 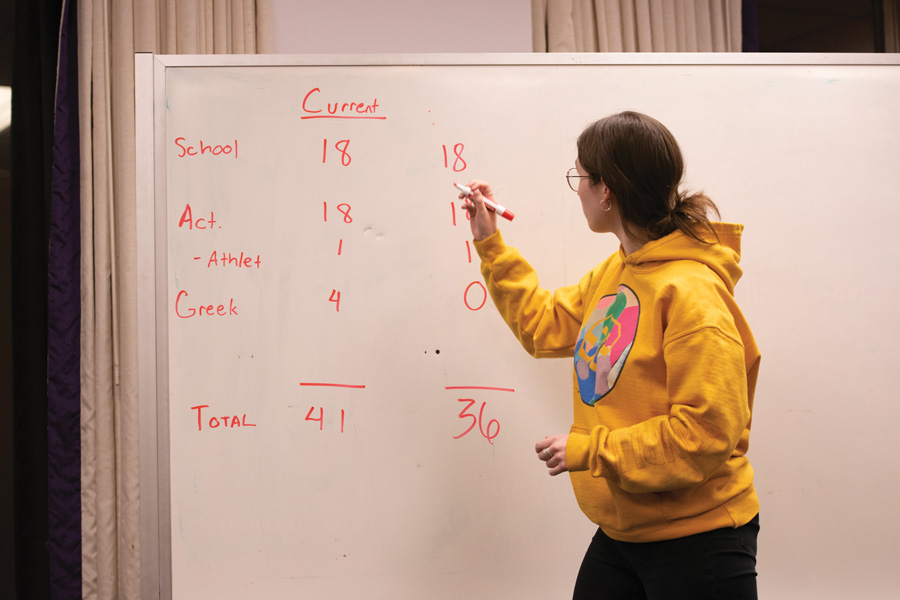 Associated Student Government Senate debated the composition of their group to consider a constitutional amendment to decrease the number of senators at this Wednesday’s session before voting to pass it.

The amendment to reduce ASG seats, proposed by Speaker of the Senate Matthew Wylie, passed in a 36-1 vote with two abstentions.

Students interested in running for Senate seats in the future can now expect to compete for 41 seats instead of the original 51. The seats are now composed of 18 seats from schools, 18 from student groups, 1 from Student Athletic Advisory Committee and 4 from Greek organizations.

This session, officials also noted, marks one of the highest attendance rates the Senate has seen in Winter Quarter, following a Feb. 12 meeting in which the Senate did not reach quorum, the simple majority of members to be able to vote on an amendment.

“I am glad that we were able to make some progress,” Wylie said. “Change is a slow, long process and we took a step in the right direction.”

The Senate passed the measure, updating the code to include that the committee “must prioritize selecting student groups that serve marginalized students.”

This means ASG will have the opportunity of facilitating a more open-ended and involved discussion of the matter of representing student identity groups on their own terms.

The votes occurred after weeks of debates on how to accurately represent the Northwestern student community and many versions of how the Senate should be composed. Senators suggested designating specific seats to organizations like For Members Only and QuestBridge Scholars. Others suggested eliminating Greek seats completely to consolidate them into student groups.

In contrast to these proposals, senators also brought up that while there was intent to represent student groups, ASG should not be the deciders to designate who gets to be represented.

After the debate, Weinberg sophomore Margot Bartol, ASG’s deputy vice president, said there needs to be a much longer conversation beyond the session.

“Having permanent seats for marginalized communities (is) I think something that can work and it works for other schools,” she said. “But the way it was presented tonight, like for specific groups that were going to be chosen and however many other marginalized communities that weren’t gonna be represented in that same way, felt really problematic to me … If we’re going to do it, we gotta do it right.”

Bartol also brought up considering constituency senatorship, which is a representative method successfully used by the student government in the University of Iowa, in which members of certain identities vote on senators that can represent them.

Senators noted that even student groups dedicated to serving marginalized communities have failed to represent intersectionality in the past.

Daniel Rodriguez, a SESP sophomore senator, said he pushed for schools with smaller student populations to have proportional seats. He added that he also advocated for separation in Greek seats so that there was more room to represent student groups of marginalized identities as well.

“It is a step in the right direction,” Rodriguez said. “I definitely think that there’s still conversations to have about how we can have overall representation on campus on marginalized communities, but I think it does (extend) the olive tree branch so people from all different backgrounds are able to talk.”