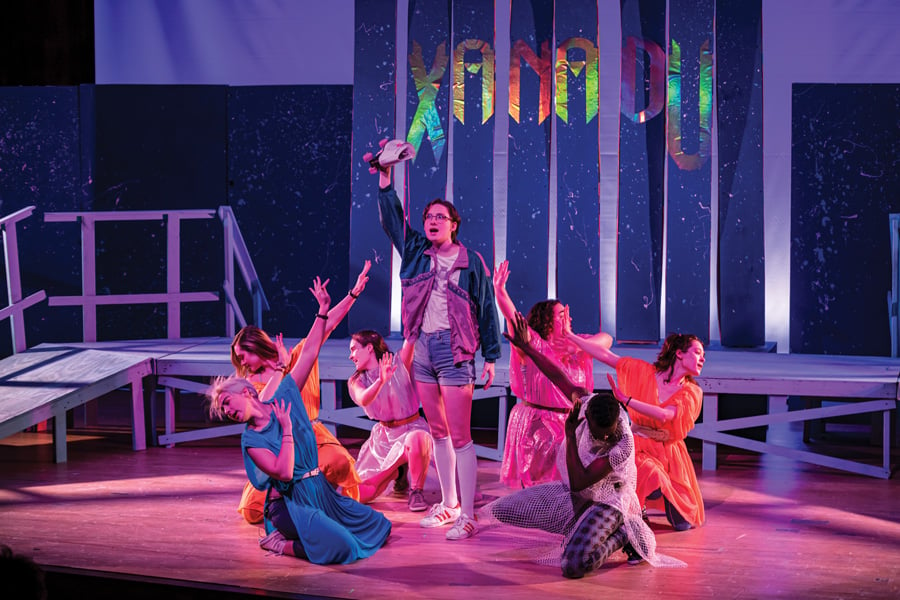 The cast of “Xanadu.” The genderbent production brings a queer vision to a famously campy film.

When Communication senior Shane Eichstaedt was a “very gay and very sad” 13-year old, they went to see their friend in a local production of “Xanadu,” a musical version of the famously terrible Olivia Newton-John film. Eichstaedt fell in love with the show, but also knew that it would be so much better if they had the opportunity to implement their unique vision.

And that vision was incredibly, extraordinarily queer.

“‘Xanadu’ didn’t know how gay it was until I told it it was,” Eichstaedt said.

Now, Eichstaedt is bringing their queer version of “Xanadu” to life in McCormick Auditorium. The musical, which is produced by WAVE Productions, will go up this Friday and close after a two-day run.

“Xanadu” tells the story of Clio, a Greek Muse who travels from Mount Olympus to Venice Beach, California disguised as an Australian woman “Kira,” with the goal of helping struggling artist Sonny achieve greatness. The two set out to build a roller disco, but complications ensue when Kira develops feelings for Sonny, as the Muses are forbidden by Zeus from entering relationships with mortals.

The original 1980 movie musical version of “Xanadu,” which starred Newton-John and Gene Kelly with music from Electric Light Orchestra, was a notorious box office flop and critical failure. It did however spawn “Magic,” a number one hit single for Newton-John, and developed a cult following, especially in queer communities. The musical version, which premiered on Broadway in 2007, is a loving parody of the film, taking a tongue-in-cheek and intentionally camp approach to the material.

Communication senior and “Xanadu” producer Sophia Barron said WAVE as an organization is focused on producing work they feel like the campus needs, and the team was interested in producing a fun, bright show to cheer people up during the dead of winter. In addition they are very director-focused and support directors with specific visions for their material, and Eichstaedt had a very clear vision of bringing a fun, celebratory show to campus.

For their production, Eichstaedt opened up the roles in the script to performers of all gender identities, casting solely based on ability. Because of this, Sonny is now played by a woman, queering the central relationship of the story. In addition, the character Danny, a tough real estate mogul with a heart of gold, is also portrayed as a queer women in this production.

“The movie is pretty old, it’s set in the 80s, so it’s interesting to look at it as if it’s reflective of the 80s but also we’re doing it now in 2020,” Barron said. “(We’re) kind of reflecting on how relationships can look like now, and they don’t have to just be the way they are in the movie.”

Danny is played by Communication freshman Anelga Hajjar, who said that making the character a woman has added significant nuance to the role. Danny is a very traditionally masculine character, but when Danny is portrayed as a woman, it adds another layer of her performing masculinity to succeed in her field. Hajjar said this interpretation has made the character significantly more empathetic and relatable, as this struggle of performing masculinity is one many women can relate to.

Hajjar said that working on the musical has been unlike any other rehearsal process she has been in, because of how incredibly fun it has been. According to Hajjar, Eichstaedt as a person is very compatible with the tone of “Xanadu,” and has helped establish a goofy and energetic rehearsal room filled with people who support each other, and that has translated into the joyful, raucous energy of the production.

“Everything needs to be at a hundred percent or more,” Hajjar said. “When we’re on stage it needs to be like we’re having the time of our lives, that’s what we need to portray on stage.”

Although “Xanadu” is a very silly show, Eichstaedt said their production, through its alterations, has become something important to them. “Xanadu” is a muscial about fighting for love, and Sonny and Kira’s struggle to be together, especially when the Muses view love as a curse, is much more meaningful now that they are a queer couple. Through “Xanadu,” Eichstaedt hopes to spread what they call radical queer joy, showing queer people living happily, healithly and in love.

“Straight things bore me,” Eichstaedt said. “I’m a queer person who sees a queer world, so those are the worlds that I try to make. And I think that people will find that it is truer than they ever could have imagined.”