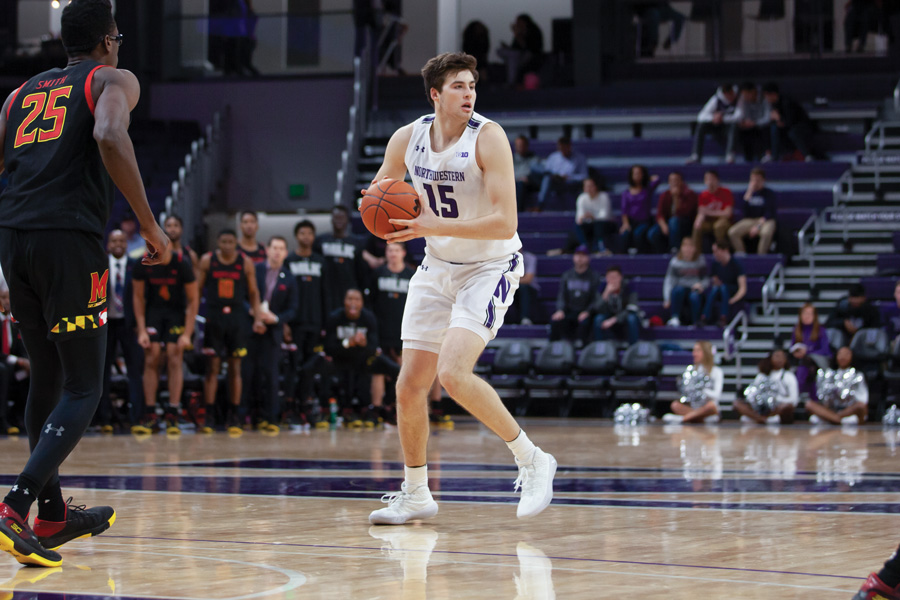 Ryan Young is a redshirt freshman center who chose NU over, among others, Maryland. Though he’s been a solid player for much of the year, he hadn’t scored in double figures in a month and figured to be overmatched against a player like Smith.

“Somebody like (Smith), who has experience, has a big, physical frame, can come out and shoot the three, you have to be able to test yourself against that,” Young said. “He’s somebody I think I can model my game after. Getting ready to prepare against him is just working hard and trying to elevate your game to his level, because he can do a little bit of everything.”

Young carried NU at times on a night when its two top scorers, sophomore forward Miller Kopp and graduate transfer guard Pat Spencer, struggled early on. Maryland sprinted out to a 17-6 lead eight minutes into the game, and the Cats started just 1-for-10 from the field.

Coach Chris Collins said Young will benefit from playing against a player of Smith’s caliber and that he helped settle the team down after the rough start.

“They got off to a quick start and made some shots, and I thought he was the one early in the game who settled us down,” Collins said. “He got some baskets, and that got us going. I’m really excited to watch his growth.”

Maryland threatened to pull away several times after that, but Young kept NU within an arm’s length until the final minutes. He showed there is more to his game than just scoring, too — he had two blocks, including one on a Smith layup under the basket in the second half, as well as three assists, two of which were on crosscourt passes that set up open three-pointers for Kopp.

Young registered his most points since scoring 25 on December 15 against Southern Illinois-Edwardsville, and his most against a Power 5 opponent all season. His assist and block totals tied season highs.

“Ryan’s one of those guys, you love him because he just comes to work,” Collins said. “He’s not the biggest athlete out there on the floor, but he finds a way.”