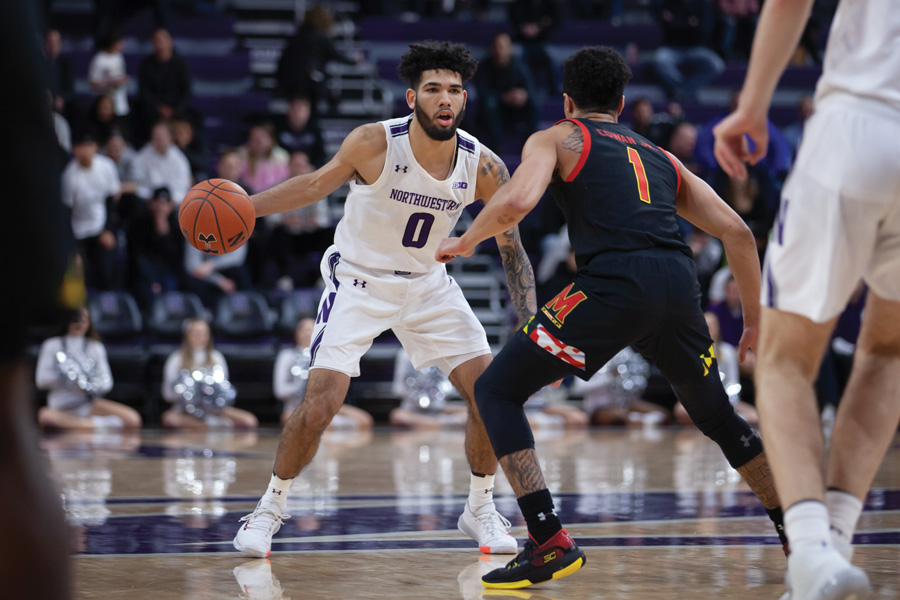 Freshman guard Boo Buie wowed the crowd with his ball-handling skills, but his efforts couldn’t lift Northwestern to a win. Buie scored 15 in the Cats’ loss.

COLLEGE PARK, Md. — Northwestern last beat Maryland on March 10, 2017. To put that into perspective, Kawhi Leonard was still plying his trade for the San Antonio Spurs and President Donald Trump had only just taken office two months prior.

That team, led by Bryant McIntosh and current Orlando Magic talisman Vic Law, was gearing up for Northwestern’s first ever appearance in the NCAA Tournament. They’d go on to win 24 games, taking down Vanderbilt in March and spawning the Crying Kid meme.

Times were different. That was three years ago.

Doomed by a sluggish first half, the Cats (6-19, 1-14 Big Ten) dropped a close game to Maryland (22-4, 12-3) Tuesday, their fifth straight loss to the Terrapins since that night in Washington, D.C. almost three years ago.

It was a tale of two halves. Maryland opened the game on a 17-6 run and out-assisted NU 18 to 3 in the first frame. Things were different after halftime. Down 37-25 at the end of the first frame of play, the Cats outscored the Terrapins in the second.

“For a lot of our guys, they’ve never played here, which is just crazy,” coach Chris Collins said. “That’s how young this group is. I’m just really proud of coming in here, the way we competed against one of the best teams in America.”

Freshman guard Boo Buie is the Cats’ Kyrie Irving. At his best, he’s an artist. Spot up shots and scintillating handles, all done at such a fast pace. He showed out in the first half, accounting for 9 of Northwestern’s 25 points, shooting 4-9 from the floor.

Buie’s last basket was the most impressive of the bunch, an intense dribble sequence four minutes from the half in which he dropped on one knee before picking himself up and calmly sinking a jumper.

“As long as I’ve played basketball, every coach I’ve ever played for has just told me ‘just keep playing,” Buie said. “If a play breaks down just keep playing, never stop until you hear a whistle.’ I kind of just had to keep playing on instinct.”

Buie’s baskets helped to keep the game close early. Ryan Young’s rebounds did too. The freshman center had five in the first half, going toe to toe with Jalen Smith, Maryland’s superstar big man.

“I thought he was the one really early in the game that kind of settled us down,” Collins said. We went into him, he got some baskets and I thought that really got us going.”

Young finished the game with 17 points and 8 rebounds. He scored eight points early in the second half to key a run which brought NU’s deficit from 12 points to five. Sophomore forward Miller Kopp also helped to tighten the score, pitching in with 13 points, all in the second frame of play. Kopp made 3 of the Cats’ 4 three point shots, grabbing three rebounds in the process.