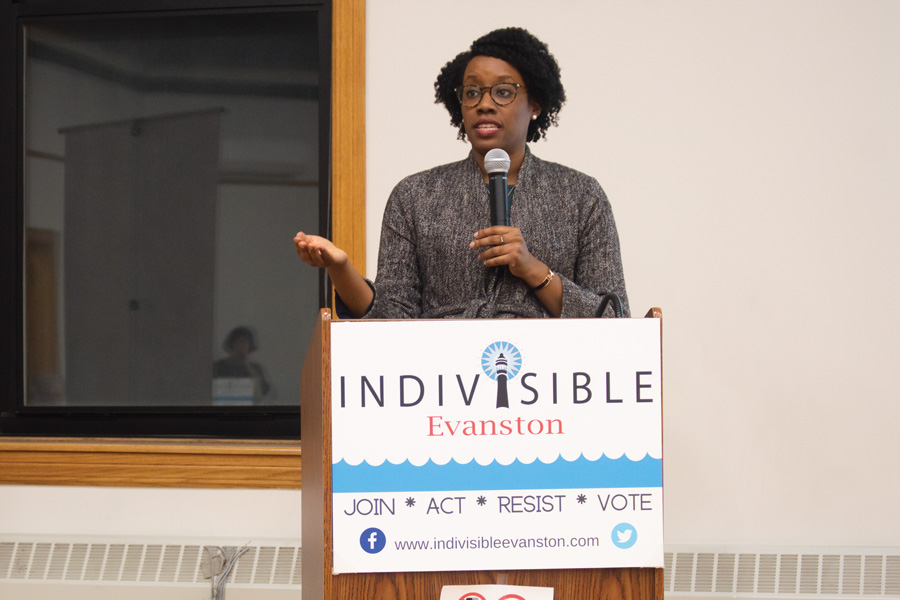 U.S. Rep. Lauren Underwood. Underwood was declared the winner of her race against Republican Jim Oberweis.

U.S. Rep. Lauren Underwood (D-Naperville) spoke to Evanston residents Tuesday about her work in Congress, and asked for support in her re-election campaign in the historically-red District 14.

Underwood became the first black woman to ever hold the seat in 2019. Referencing her district’s right-leaning voting patterns, where the approval rating for President Donald Trump is usually “three or four points higher” than the national figure, Underwood emphasized that her re-election will not be easy.

“President Trump is more popular right now than he’s been at any other point in his presidency,” Underwood said. “We have our work cut out for us.”

The event, held at the Lorraine H. Morton Civic Center, was hosted by Indivisible Evanston, one of thousands of local chapters within the nationwide Indivisible movement. Indivisible launched after Trump’s 2016 election and aims to energize voters against the Trump agenda and advocates for the values of inclusion, tolerance and fairness.

Underwood said her biggest challenger is Republican Jim Oberweis, a businessman and owner of Oberweis Dairy who currently serves in the Illinois Senate. Underwood called her opponent’s finances into question and said his views are “bigoted.”

“He’s somebody who’s extremely wealthy, but all those earnings are sitting in the state of Florida with his wife, where she has residency, and they don’t pay income taxes,” Underwood said of Oberweis. “He has very well-established bigoted and racist views — we know this. We know that those views are not in line with the 14th District.”

Underwood also emphasized her role as a bipartisan congresswoman who can appeal to a variety of voters. She said many Trump supporters voted for her in 2018, and hopes to continue that trend.

Although Evanston does not border District 14, Laura Tanner Swinand, one of the co-founders of Indivisible Evanston, said it is important for the group to support Underwood, as her views align strongly with theirs.

“Because we can’t vote for her, we want to help educate the voters in her district, because we believe that the issues that are important to her are really important to us and to the country,” Swinand said.

Underwood stressed to Evanston residents that they might have to speak cautiously when helping her campaign in the district. She said they should speak on shared values as opposed to a “lack of empathy for our neighbors.”

Additionally, Underwood instructed those helping the campaign to maintain “awareness and discipline” when knocking on the doors of District 14 voters, who are generally not as liberal as many Evanston residents.

Underwood also highlighted her Congressional achievements, which include working to improve health conditions for undocumented immigrants detained at the border and increasing insulin accessibility. The former senior advisor at the U.S. Department of Health and Human Services focused many aspects of her speech on health care and advocated to lower the maternal mortality rate among women of color.

Darlene Cannon, who was born and raised in Evanston, said she thought Underwood articulated the issues she prioritizes well.

“It was refreshing to hear someone who’s young, who can identify the problems and wants to work on both sides to solve the issues that all Americans need,” Cannon said.