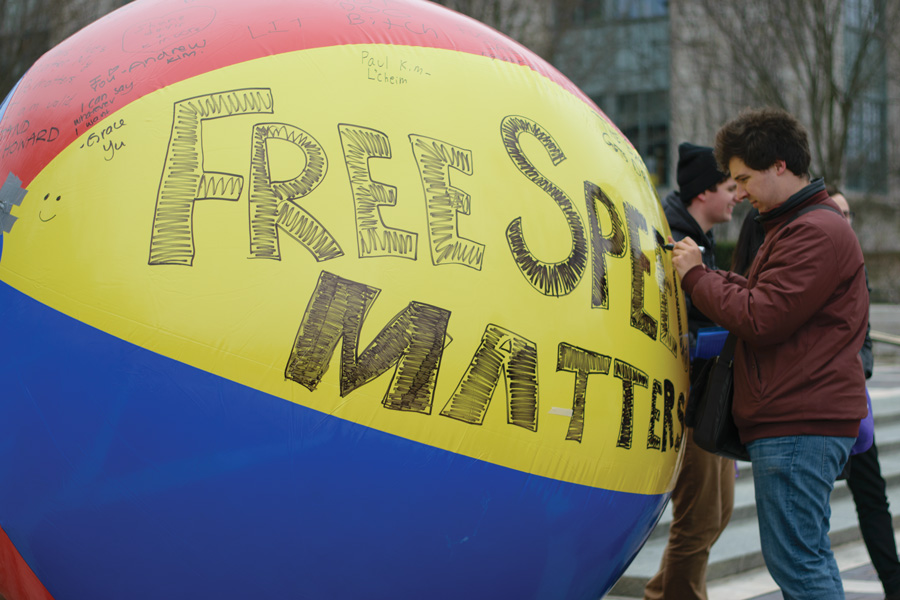 A beachball rolled in front of the Technological Institue in 2017 to protest the University’s free speech policies.

As the 2020 election season progresses, students are reviewing what free speech means at Northwestern. This May, a committee of students and administrators will re-evaluate the University’s demonstration policy as is done every two years.

As of May 2018, the policy states, “The University encourages freedom of speech, freedom of inquiry, freedom of dissent and freedom to demonstrate in a peaceful fashion. Regardless of their own views, community members share a corresponding responsibility to welcome and promote this freedom for all.”

Following protests in response to Jeff Sessions’ talk on campus last November, 11 charges were issued against five students, and subsequently dropped. Since then, students have re-examined their definition of free speech and how it aligns with University policies.

In an interview with The Daily last week, University President Morton Schapiro said he and senior staff members have been continue to discuss how to handle demonstrations on campus. He emphasized that their priority is “to keep everybody safe.”

Weinberg senior Henry Molnar, founder of FreeSpeechNU, will be on the Policy Review Committee reviewing the policy this spring. He said free speech should extend to everyone so far as it is not violent or destructive, and agrees with the University that harassment is unacceptable.

Weinberg senior Dominic Bayer, vice president of NU College Republicans, advocated for free speech and protests on campus so long as they do not constitute harassment such as targeted threats or the intention of harming an individual.

Bayer said he thinks protests are generally positive as long as they do not prevent anyone from communicating their ideas. He expects an increase in student activism as the election progresses, and even more so if Trump is reelected.

“I do believe it’s appropriate to have protests outside the buildings or take advantage of the Q&A section during events to express disagreement with a speaker,” he said. “But I do think when it crosses the line is when it switches to trying to disrupt the event, trying to shut down the speaker or causing a ruckus to the point where it impairs attendees’ abilities to listen to the speaker.”

Weinberg junior Adam Downing, director of public relations for Northwestern University College Democrats, said he believes in unabashed free speech with the exception of anything that is racist, sexist or otherwise directly harms an individual. Downing said that although not every opinion is of equal value, everyone is worth hearing.

When it comes to student protests, Downing said when a protest becomes disruptive — such as when property is destroyed — it actually moves the conversation backward because the focus becomes the destruction, not the issue at hand.

Downing said it is important to hear constructive feedback even if sometimes it isn’t what you want to hear. He noted that there are different ways to protest, whether it is listening to a speaker and asking tough questions.

He said he believes free speech should be used as a tool to reach the end goal of having conversations with those one disagrees with.

“Free speech is something we talk about a lot in this country, but I think it’s only one half of the conversation,” he said.“I think the other half is having difficult conversations, it’s really really easy to be an advocate for free speech. It’s harder to sit down across from the table with somebody you disagree with.”