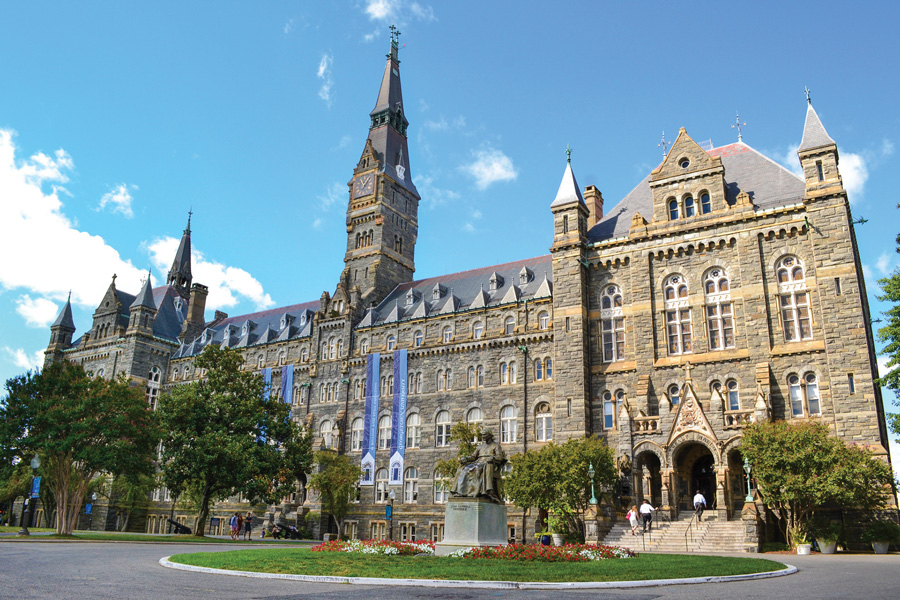 Georgetown University in Washington, D.C. Georgetown’s Board of Directors voted this month to fully divest its endowment from fossil fuels after years of action from Fossil Free Georgetown.

On Feb. 6, Georgetown University’s president announced the school’s Board of Directors had voted to stop investing endowment funds into fossil fuel firms and withdraw existing holdings from those companies.

In doing so, Georgetown became one of the first private universities to do what student-activists across the country have been demanding for nearly a decade — fully divesting from fossil fuels.

Georgetown is not the only one — Stanford University, Johns Hopkins University and the University of Pennsylvania have partially divested, while the University of California system, Middlebury College and Smith College have all voted for full divestment. With over 50 campus Fossil Free clubs across the world participating in Feb. 13’s Global Divestment Day and the movement garnering national media attention after both Harvard University and Yale University’s clubs staged a joint protest at the annual Harvard-Yale football game, the divestment movement has risen from its humble beginnings to become a centerpiece of national student activism. Fossil Free Georgetown, which began in 2012, is among the most prominent successes.

“We’re all really, really excited that they did take this step,” said Sadie Morris, a sophomore member of Fossil Free Georgetown. “We think the role that our organization has played in, one, creating conversation about investment on campus and making investment socially responsible, and two, actually really bringing divestment to the forefront of these Board members’ minds is really, really important.”

But while peer institutions like Georgetown have become leaders in the fossil free movement, Northwestern University has remained silent.

The Board of Trustees voted in 2015 to reject a Fossil Free Northwestern proposal to divest from coal companies. Five years later, the Board and Fossil Free Northwestern again sit at an impasse. A petition for full divestment — this time approved by the Advisory Committee on Investment Responsibility, created in 2017 as a result of the failed 2015 proposal — was submitted to ACIR in January 2019 and approved in June. The Board has yet to respond to the petition.

While the situation today may seem similar to the failed 2015 effort, Fossil Free Northwestern now has the benefit of an enhanced national dialogue and the Georgetown example to use in negotiations — a high-profile success story that did not exist five years ago.

“It’s exciting to see so many responses from other schools around the country who are now using this as part of their own campaigns to hold up Georgetown as an example of a University that has taken this step,” Morris said. “And so that’s very important to the whole divestment movement.”

Formeded in 2012, Fossil Free Georgetown launched its movement with demonstrations, protests and sit-ins. Through that activist work, Morris said club members began relationships with Georgetown’s Committee on Investments and Social Responsibility — analogous to NU’s ACIR — and worked with the faculty, staff and students on the subcommittee to develop and successfully implement a policy in 2017 calling on Georgetown to divest from tar sands and coal and a Socially Responsible Investing Policy in 2017.

Grace Dolezal-Ng, Fossil Free Northwestern director of marketing and media, said Board members had told ACIR members they would have an answer to the proposal by the Feb. 11 ACIR open meeting, but they still have yet to receive one. The Communication senior said one goal of Fossil Free Northwestern’s Feb. 13 protest was to express their frustration with the Board’s lack of response. Morris said Fossil Free Georgetown also took action when they were left in the dark.

“We could not really get any more than a few words from (the sub-committee) last semester,” Morris said. “So, we were like, okay, this isn’t working anymore. We need to try a different tactic. We need to try to go back to our more activist roots.”

To do so, Fossil Free Georgetown decided to pursue a student referendum — something Fossil Free Northwestern did in the initial 2015 push, when 74 percent of students said they supported divestment from coal. The student pressure worked — after securing Student Association senate approval for a referendum on divestment — Fossil Free Georgetown members finally heard from members of the subcommittee, who said they were working on their own divestment proposal and asked for the club to halt any plans to generate student input or hold any protests, claiming student action would not be helpful to their attempts to convince Georgetown’s Board of Directors to vote to divest, Morris said.

But years of struggling to get their Board to follow through on the 2014 coal and tar sands divestment policy had led students to lose trust in the sub-committee, so they decided to go ahead with the referendum, scheduled for Feb. 6, which ended up passing with over 90 percent of the vote. As it turned out, just the threat of the referendum was enough — the Board voted earlier that day to divest.

Despite their frustrations and skepticisms with the subcommittee, Morris said having a close relationship with administrators through that official channel made the difference in Fossil Free Georgetown’s divestment campaign, and recommended other universities’ groups try similar tactics of building those connections while having a strong activist presence to fall back on if negotiations stall.

“GU Fossil Free started with making a proposal, making a set of policies regarding socially responsible investment,” Morris said. “Because then once they had that (2017 coal and tar sands) policy in place and they got the Board to agree to that policy, then there was always an actual set of laws for us to look to. Making that policy not only really cemented our relationship with the administration, it gave any of our claims that much more legitimacy.”

In addition, the national scope of the movement has given individual campuses’ movements more legitimacy. Ari Bortman, an organizer with Fossil Free Penn at the University of Pennsylvania, said the “size and strength” of the fossil free movement cannot be understated. Penn’s Board of Trustees voted to refrain from investing in coal and tar sands companies, but Bortman hopes continued action by Fossil Free clubs across the world will put pressure on the school to move towards full divestment.

Bill McKibben, an environmental activist who founded climate change group 350.org and whose name has been floated as a possible Cabinet member if U.S. Sen. Bernie Sanders (I-Vt.) is elected President, told The Daily fossil fuel divestment is “the biggest anti-corporate campaign of its kind in history.”

McKibben said Fossil Free Northwestern can succeed where it failed in 2015 by pointing to both moral and economic arguments for divestment and reminding the Board that the climate situation has drastically changed in the last five years.

“They can go back and say: the world has changed since you considered this last time,” McKibben wrote in an email. “Obviously climate change has gotten worse. Obviously Washington isn’t going to lead the way. Obviously you’re losing money. Obviously many of your peers have taken this step. Obviously your future students — the Greta (Thunberg) generation — want you to act.”

Even J. Landis Martin, the chair of Northwestern’s Board of Trustees, told The Daily peer schools’ policies and the movement’s successes are “a factor that the Board would consider, and that the committee, I’m sure, considered.”

“There are a lot of peer institutions that are beginning to divest, and Northwestern, as a very prominent University, should follow suit,” Dolezal-Ng said. “We should be setting a precedent for other universities as well and continue this momentum that’s already happening.”