There’s a Ghost in Gadsden’s Garden: The Actors Gymnasium puts on new show 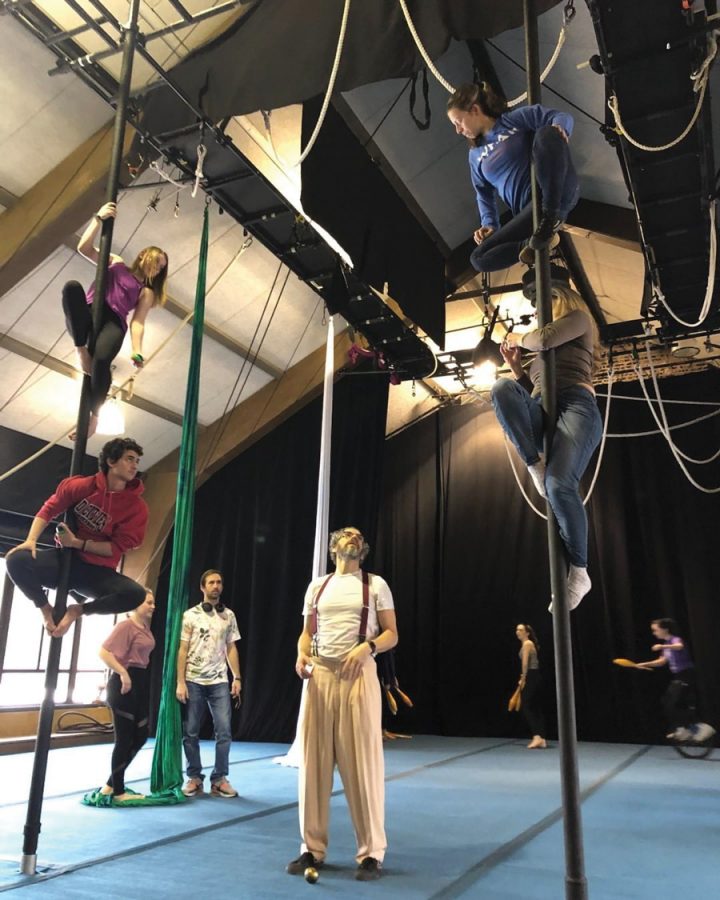 Actors rehearse “The Ghost in Gadsden’s Garden.” The original circus will open Feb. 22.

A man who tends to a haunted garden. A ghost who resides in the garden and is in a relationship with the living man. A child who stumbles upon the wilting garden and finds all sorts of phenomena hidden in its thorny walls.

These are the characters in The Actors Gymnasium’s new circus, “The Ghost in Gadsden’s Garden,” set to premiere at the Noyes Cultural Arts Center this Saturday, Feb. 22 and run through March 22.

Co-written and directed by Chris Mathews and Sully Ratke, this original show explores the evolution of relationships from multiple angles, from those that deepen to those that die slowly, according to Mathews.

Mathews said he and Ratke worked together with the goal of creating an original, spooky story. While Mathews handled the script, Ratke designed the visual world of the show, with both working to incorporate a circus theme.

Choreographer Sylvia Hernandez-DiStasi said circus choreography can be used in many different styles to express metaphors or add bursts of excitement. For this show, she chose to place emphasis on the circus in the magic garden, where she saw an opportunity to manipulate equipment and bring the ghost to life through aerial tricks.

Hernandez-DiStasi emphasized that the Actor’s Gymnasium felt a need to keep coming up with new things to keep the audience enticed. For the first time on their stage, they will be using an aerial pole, which hangs in the air and allows the actor to swing around freely, a more complicated technique than the usual routines they use. Hernandez said it is exciting to incorporate new elements in their shows after including the usual elements like fabric.

“It’s like an adrenaline rush,” Hernandez-DiStasi said. “You’re trying to fit in a piece of a puzzle and figure out how to make it work.”

Both Mathews and Hernandez-DiStasi said time was their ultimate enemy during this production, as there was never enough time to rehearse due to everyone’s conflicting schedules and the tight deadlines that shows of this caliber run on.

Mathews added another challenge he faced was his own doubt in the success of the show. He said as he and Ratke were creating the show, both wore their hearts on their sleeves and felt more vulnerable as their vision was brought to life.

“You can’t move through a process like this in fear, so you have to just sort of buck up and hope you’re doing it as best you can,” Mathews said. “We’re just trying to live by that.”

In spite of all the difficulties they encountered, Hernandez-DiStasi is hopeful for the success of “The Ghost in Gadsden’s Garden.” She said that she thinks the story of the show has a touching, heartwarming center.

“We don’t have a whole lot of that in our world today, where you can go somewhere and just forget about your troubles and the state of the world, really get immersed in a show for 90 minutes and come away feeling like there’s redemption and hope,” Hernandez-DiStasi said. “That’s always been my goal with our productions.”

Correction: A previous version of this story misstated the opening day of “The Ghost in Gadsden’s Garden.” The show opens on Saturday, Feb. 22. The Daily regrets the error.