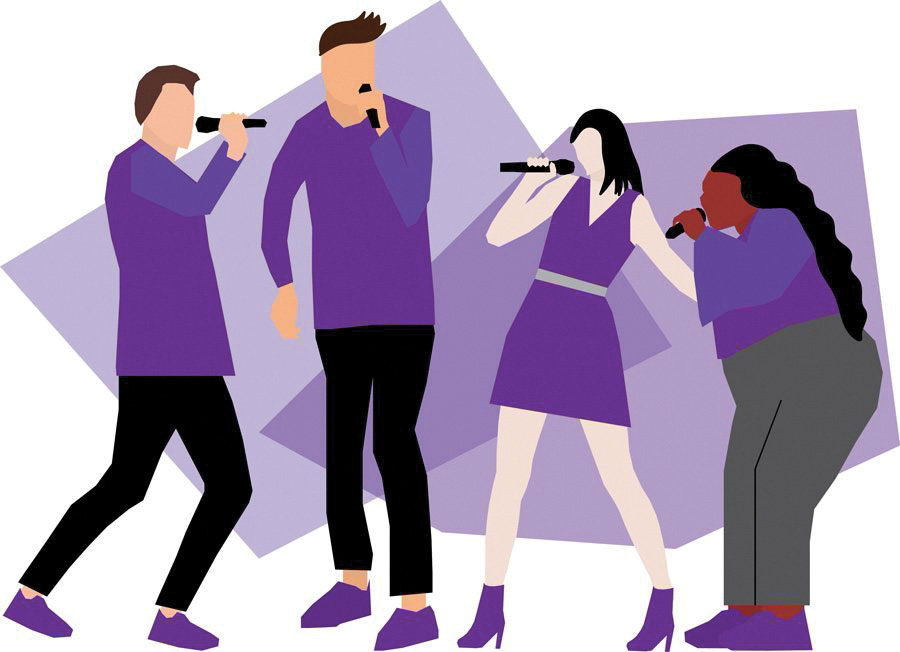 For many a cappella groups at Northwestern and other universities alike, competitions are a valuable way to garner national recognition and grow as a group — though for some, it’s more “treble” than it’s worth.

As the a capella community on campus approaches the competition season, however, many groups have vastly differing opinions about whether or not competing is fully aca-worth it.

Weinberg senior Daniel Goldstein has been a member of Purple Haze, a co-ed competitive a cappella group, since his freshman year. He said that challenging themselves through competing is an imperative part of what makes the group great.

“Our group is filled with so many ridiculously talented singers,” Goldstein said. “When we approach competitions, we’re just having fun and (seeing) these crazy talented musicians actually try their hardest to put together a product that they’re proud of.”

Unlike most of his fellow Purple Haze members, Goldstein is not in an arts-centered academic major. As someone who isn’t planning to pursue singing after college, Goldstein finds competitions to be a gratifying and exciting environment.

Communication sophomore Simran Deokule has been a principal member of the South Asian and American fusion a cappella group Brown Sugar since her first quarter at Northwestern, and currently serves as president. While the group used to compete, Deokule said it took a break in recent years. While she has yet to compete with the group, it’s something she looks forward to in the future.

“Competing is important for us because we’re sort of a niche group,” Deokule said. “We have a lot of music that isn’t commonly heard, since we are a South Asian and American fusion. Our music is pretty unique, and we really just want to showcase that.”

Brown Sugar stopped competing in national competitions since plans emerged to put out their fifth studio album, which Deokule hopes to see come out soon. The album will consist of eight to ten songs that mix American pop with Bollywood or Indian music.

As the president of the all-male a cappella group Freshman Fifteen, Communication junior Jacob Leaf said competition isn’t crucial for every group on campus. In fact, he said his group’s decision not to compete is a creative choice.

For Freshman Fifteen, their ethos is to build a creative and friendly environment for every member, where they can feel free to experiment with the music they want to perform. Although Leaf said he respects a cappella groups that take part in competitions, he feels that doing so would interfere with the mission statement of his group.

“Usually the stuff that we ourselves enjoy singing and the way we like to perform doesn’t mix with the classifications that would occur at a competition,” Leaf said. “And because our group would not enjoy it, we don’t do it. The fact that the sound that we’ve cultivated is unique to our own and we’re not abiding by any rules or any competition standards makes for a whole lot of fun.”