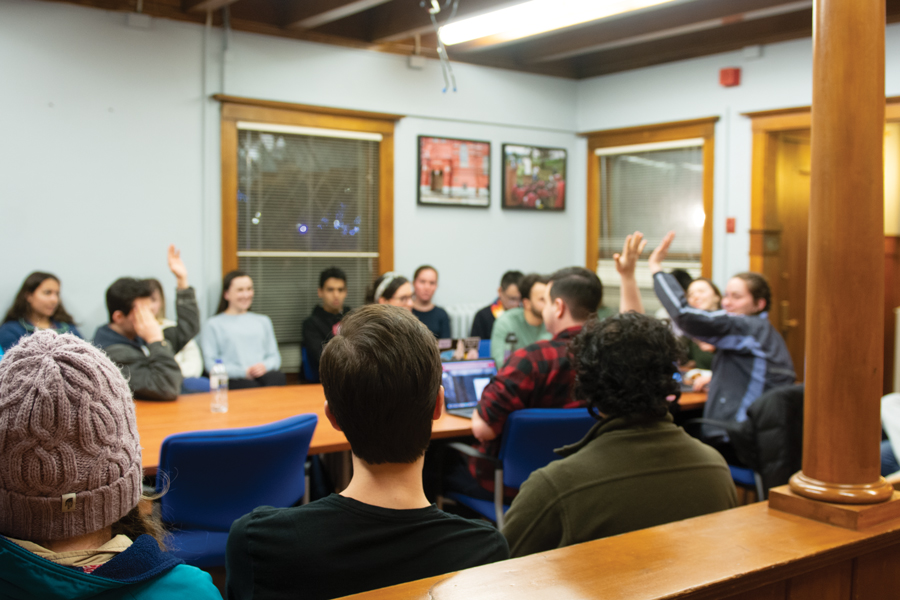 With a vote of 10-8, Northwestern Political Union voted in favor of a resolution that U.S. should implement free public college.

Northwestern University Political Union narrowly voted to support the resolution that the US government should implement free public college free for all U.S. students.

In a vote of 10-8, with 3 abstentions, the union voted in favor of the resolution after an hour of debate.

Sachin Shukla, led the pro side and argued in favor of free college. In his prepared opening statement, the Bienen junior stressed how free post-secondary education goes in line with age-old American values of opportunity, and should be a right for citizens.

“This is the whole idea behind the American dream; the promise of America is that in this country, anyone can do anything,” said Shukla, who also serves as the group’s events coordinator chair. “As the American economy changes, what it takes to make the American dream a reality has also changed, and all signs point to post-secondary education as an essential ingredient of that opportunity.”

Shukla also highlighted how when considering the U.S. federal budget in its entirety, which included $4.45 trillion in spending last fiscal year, the cost of free public education becomes “trivial.”

Medill first-year Felix Beilin opened the arguments against the resolution and used the framework of a slippery slope to justify his position on the issue. Beilin argued that a social responsibility to pay for all citizens’ bachelors degrees could eventually lead to the government deciding to pay for students’ room and board, or citizens’ post-doctorate degrees.

“There are certain mistakes inherent to the idea that there should be universally free, four-year college,” Beilin said. “If we want to extend the social and educational entitlement idea to its extreme, why should we stop at college? Why not pay for everyone’s postgraduate and doctoral degrees? … I’d say that we don’t have a social responsibility to go to these extremes.”

Beilin also said he doesn’t think taxpayers should have to pay for the wealthy to attend free college, especially since the richer you are the more likely you are to attend college.

Though the majority of those who spoke on the issue opposed Beilin and were in favor of free public college, Ansh Prasad, a Weinberg sophomore, also argued strongly against the resolution.

“We are acting like college is the proverbial ladder that will solve America’s problem of social mobility,” Prasad said. “When there is a glut of people who have college education (and) there is not a proportional increase in the amount of opportunities available to them, these people are just effectively left with a college degree that is functionally useless.”

But being in the minority, Prasad’s argument was met with criticism from many of the other debaters.

Ellen Howard, a Weinberg sophomore, stressed that college is “not just a sorting mechanism,” but serves a more practical purpose.

“You kind of fundamentally misunderstand what college is,” Howard said in response to Prasad. “If your college education is actually giving you skills, then it shouldn’t matter if other people have the same piece of paper.”