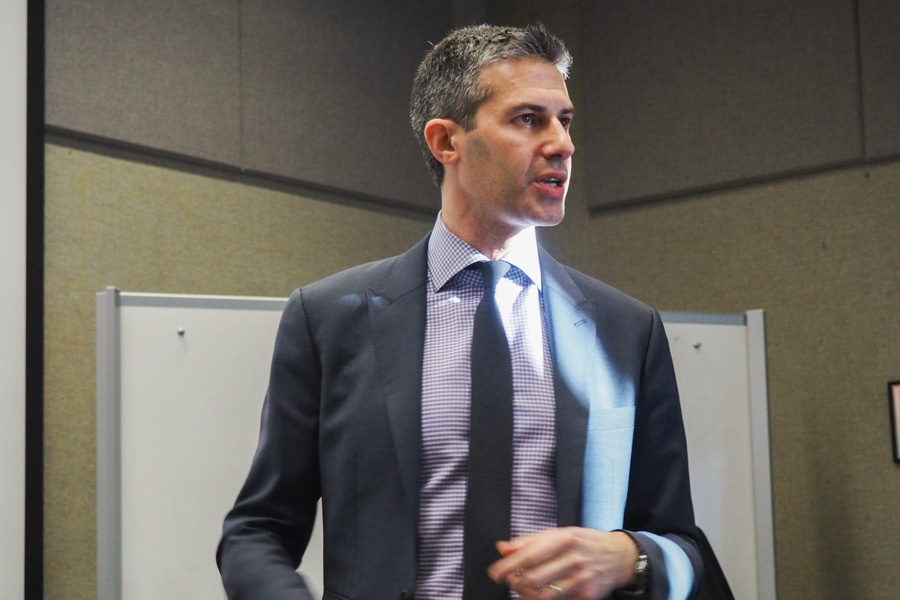 Jeremy Gilbert. Gilbert is the director of strategic initiatives at the Washington Post, and he talked to Medill students and faculty on Tuesday about the changing media landscape.

Jeremy Gilbert, the director of strategic initiatives at the Washington Post, spoke to students and faculty about how educational leaders can transform future media strategies in a Medill-sponsored event on Tuesday.

Having witnessed the publication develop from a mainly local newspaper to one with national reputation, Gilbert said he has watched traffic and revenue move from print to digital as he worked to integrate advertising with innovative content. He said the shift mainly occurred between late 2013 and late 2016, when the paper nearly tripled its audience reach as it began to expand its online presence.

Gilbert also said another change in philosophy contributed to the publication’s digital expansion: The paper increased its online output from approximately 200 to about 400 stories on a daily basis, focusing more on finding unique ways to connect with the audience.

“At the Post, individual reporters have the responsibility to think about their audience, as well as the topics they cover and how they connect,” Gilbert said.

The Post has also worked on implementing new technologies, such as augmented reality, into print and online publications since 2015 to increase reader engagement with stories, he said.

Medill Prof. Owen Youngman, the Knight chair in digital media strategy, was responsible for coordinating the event. He said Gilbert’s insight would prove invaluable for students and faculty as Medill evaluates its role in the changing journalism landscape moving forward.

He said he hoped Gilbert’s work at the Post would show attendees the potential young journalists have to evolve the face of media in the coming years. One of the priorities both Youngman and Gilbert stressed was the importance of collaboration as media outlets look to incorporate multiple disciplines into their coverage.

“Far from being helpless in the face of technological change, journalists have the ability to leverage tools to tell stories in powerful and impactful ways and sustain the work of journalism,” Youngman said.

Youngman said he was optimistic after the presentation because Gilbert’s speech proved how many possibilities Northwestern provides as it educates the next generation of journalists.

Specifically, Gilbert mentioned a short animation the Post created, which follows the aftermath of a school shooting in South Carolina as an example highlighting the ways journalists can expand their coverage in meaningful ways.

Gilbert said the animation was the Post’s first augmented reality short film, and was entered into multiple film festivals, including the Tribeca Film Festival. Though the immersive experience has been shown to a smaller audience compared to other Post content, he said the impact of the story signifies a possible change in the industry.

“The idea that a handful of people have a powerful storytelling experience shows potentially where we might end up,” Gilbert said.

Medill junior Justine Banbury attended the event, and said she was drawn to it because of the way Gilbert’s role at the Post met the intersection of her interests in digital media and creative storytelling.

Banbury said she walked away with a sense of excitement around the existing possibilities in the field, though she was surprised at the ways many major publications are falling behind in innovation.

“There’s a lot of missed opportunities in the news that we’re consuming right now,” Banbury said. “So one of my biggest takeaways was the potential the industry has that a lot of publications haven’t capitalized on yet.”