Girl Scouts brighten campus with smiles and cookies for students 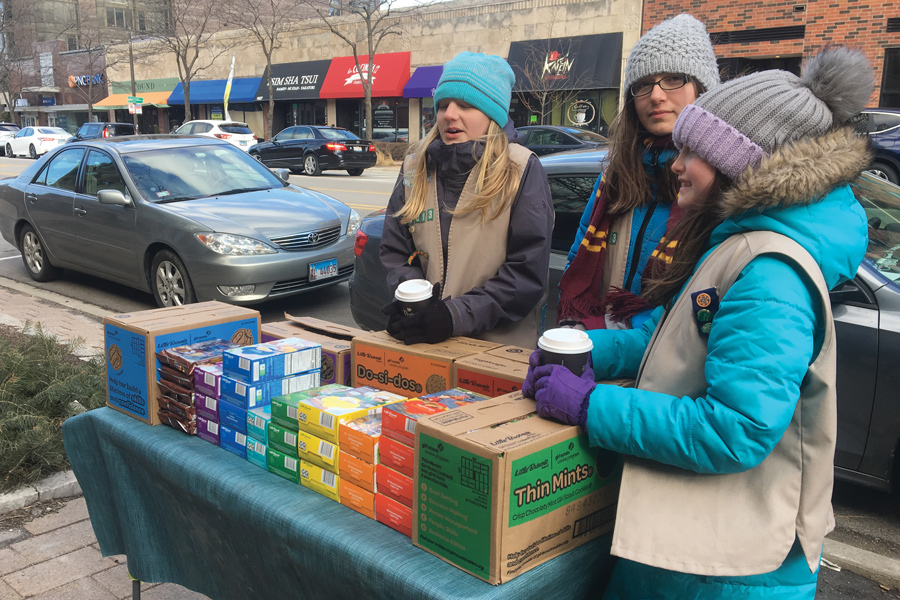 Girl Scouts and parents can be found selling cookies in front of the Technological Institute and the Weber Arch.

Groups of Scouts and parents set up tables at various locations across campus, including in front of the Technological Institute and the Weber Arch.

“I see them everywhere,” Weinberg freshman Lucy Gund said. “And I’ve been tempted because they’re just so cute.”

The Girls Scouts of the United States of America, a historic organization dedicated to developing leadership in female-identifying children, began selling cookies to finance programs as early as 1917.

Since then, Girl Scout cookie sales have expanded with the organization selling about 200 million boxes every year, according to USA Today. Thin Mints are the most popular cookie, along with Samoas, which are interchangeably called Caramel deLites.

Troops took advantage of the fact that many of the Evanston-area Girl Scouts were free on Monday because schools in Evanston and Skokie’s district, District 65, were closed for Presidents’ Day. Northwestern was still in session, leading to a lot of foot traffic in front of their tables.

Many students stopped to purchase their favorites, including McCormick freshman Mackenzie Mattone, who bought Thin Mints from a Girl Scout in a cookie costume before heading to class in Tech.

“I only bought one box because I only had $5 on me,” Mattone said. “But it’s definitely fitting for them to come here. College kids are hungry.”

The University is one of many locations where Girl Scouts in the Evanston service unit can sign up to sell cookies, said Claire Koster, who leads a Girl Scout troop in Evanston.

Koster, a SESP sophomore, became involved with the Girl Scouts when a friend reached out to her about leading an Evanston troop of 5th- and 6th-grade girls, which have been supervised by Northwestern students in the past.

Koster’s troop does not sell on campus, instead signing up for locations at grocery stores and outside Barnes and Noble on Sherman Ave. Still, she used her connections at the University to make online sales to Northwestern students.

“We sold 800 boxes worth of cookies just by sending out a spreadsheet to a handful of people,” Koster said. “One of the sororities bought over a hundred boxes.”

Koster said she recognizes why colleges are such good places to make sales. It’s convenient, she said, as people tend to walk to get around campus and the booths usually accept payment through Venmo, catering to students who do not carry cash.

On top of the convenience, she said there is a sentimental aspect to students’ love of Girl Scout Cookies, which hold a place in American culture.

Students who missed the rush of Scouts to campus this Monday will have more opportunities to pick up a box, Koster said. The Scouts will sell cookies again over the upcoming weekend, either on campus or a short walk away in Downtown Evanston.