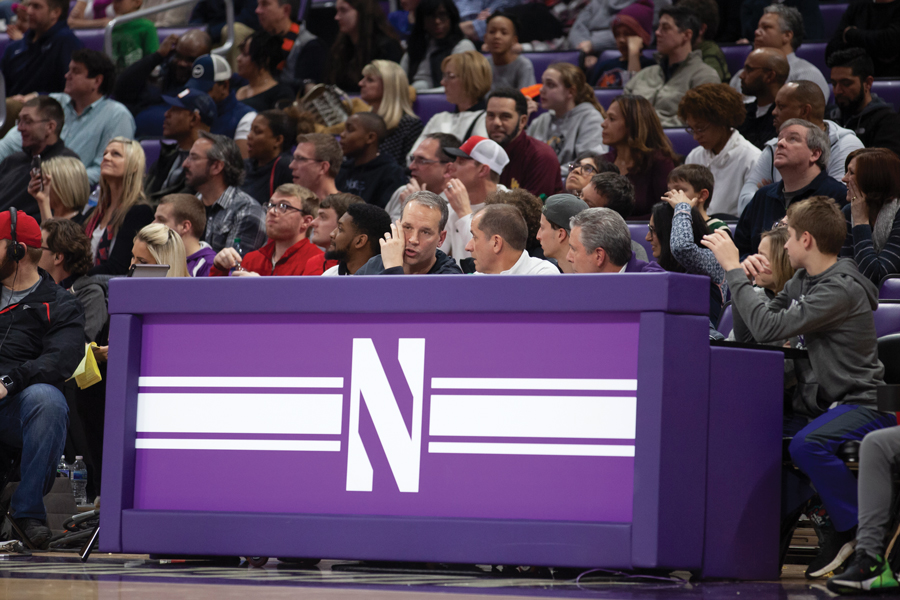 Chris Collins, Brian James and Jim Phillips scout Patrick Baldwin Jr. Northwestern is planning for its 2021 recruiting class to change the trajectory of the program.

Before Patrick Baldwin Jr. and Max Christie were five-star recruits and before they received dozens of scholarship offers from some of the biggest powerhouse college basketball programs, they were ball boys at Northwestern.

As kids, they mopped up sweat and rebounded missed shots. Sometimes, they handed out water to the players. But as young fans with family ties to the Wildcats, they also got to know each other and the program really well.

When Baldwin Jr. and Christie were ball boys, Northwestern wasn’t very good. Back in the mid-2010s, the Wildcats still hadn’t made the NCAA Tournament, and Chris Collins was a young and unproven head coach. But Baldwin Jr. and Christie paid close attention over the last decade as Collins led Northwestern to the NCAA Tournament and showed the Wildcats could compete in the Big Ten.

And now the two highly rated high school juniors are talking about teaming up at Northwestern and taking the program to another level.

Baldwin Jr. and Christie are still weighing all of their options, but Collins has been telling recruits that Northwestern’s 2021 class could be filled with stars –– potentially Baldwin Jr., Christie and other four star recruits who would be among the best signings in school history.

“Coach Collins has definitely expressed his thoughts that they want to make a big push with the class of 2021,” Christie said. “You can’t count them out if they can get a couple good players to go there. They could really trend up fast.”

The Wildcats have been playing college basketball for over 100 years, and they’ve signed exactly four recruits with a four star rating or better.

Northwestern is trying to double that figure in 2021. Baldwin Jr. and Christie would be the cornerstones of the class, paving the way for more recruits to join them.

“If I commit, I could really make an impact,” Baldwin Jr. said last week. “It would be something special if I do decide to commit… When Northwestern turns it around, you’ve seen how they can fill the house against Michigan and against Purdue (in 2017). You’ve seen the immense support.”

If he does commit, Baldwin Jr. could be joined by Luke Goode, a versatile 6-foot-5-inch four-star forward with a proven three-point shot. Goode is cousins with Wildcats’ quarterback T.J. Green, who Goode says praises Northwestern. If Goode signs, he’d be the second-highest rated recruit in program history.

“When I’ve talked to coach Collins, he’s stressed to me how big the 2021 class is,” Goode told The Daily. “He wants this to be the class that turns around the program. Once AAU gets back going, I’ll definitely be in touch with the other recruits, and we’ll definitely talk about Northwestern.”

There’s also four-star guard Tamar Bates. He’s teammates and close friends with incoming freshman guard Ty Berry, and Bates would be the best guard the program has ever signed. The Wildcats’ coaches have frequently attended Bates’ games over the last two years, and Bates said he’d be excited to work with Northwestern’s coaching staff.

“To have a coach that knows the NBA –– and so does his father –– that’s a tool that some other coaches don’t have,” Bates told The Daily. “A lot of the schools that are recruiting me have a history of getting guys to the next level, but Northwestern is big on player development as well, and that’s very important to me as well.”

The Wildcats are also recruiting four-star forward Caleb Furst, one of the top-40 players in the country who took an official visit to Northwestern last year with Baldwin Jr. and Christie. And they’ve also reportedly offered scholarships to four-star guards Jaden Akins, Kobe Bufkin, Julian Roper and Pierre Brooks.

Northwestern won’t be able to sign all of these players –– there wouldn’t be enough available scholarships. But if the Wildcats could sign three or four, Goode said Northwestern would make a quick return to the NCAA Tournament.

“What’ll do it for them is one person starting off the class,” Goode said. “If Northwestern gets a big commitment early from the 2021 guys, then that could set it off. That’s my personal opinion, and I’m not 100 percent certain of that. But if coach Collins gets the guys that he wants, then he could do big things with them.”

Collins’ contract with Northwestern expires in 2025, so he’s almost halfway through the extension he signed after making the NCAA Tournament.

But five years can fly by for a college basketball coach.

The 2021 recruiting class will graduate in 2025. This class would be the last group of players Collins can recruit and develop before having to negotiate a new contract. The players Collins is recruiting, though, have faith in Northwestern’s head coach figuring it out.

“Coach Collins is a great coach,” Christie said. “A lot of people are really ripping on him now because of the way Northwestern looks on TV or the way they’re playing. But coach Collins is in a tough situation right now where he’s playing a bunch of young guys with not a lot of experience. This can be a great year for them getting experience for their guys.”

“He’s a lot better of a coach than people give him credit for,” Goode said. “Just hearing him talk, hearing his plan for the future and seeing the young players that he has, I could definitely see him make something special at Northwestern. I know the record isn’t really showing it right now, but he’s a great coach.”

It’s no secret that the Wildcats are the worst team in the conference, and have been since 2018. Over the last three years, Northwestern has 11 Big Ten wins. The next worst team, Rutgers, has 19 conference wins over that time span, and this year the Scarlet Knights are likely heading to the NCAA Tournament.

But it’s also no secret that Northwestern has the youngest team in the Big Ten. With seven freshmen and sophomores on scholarship, the 2021 recruiting class would be joining a battle-tested group two years from now.

“Boo Buie is playing so well as a young point guard,” Christie said. “Anthony Gaines is injured, but he’s a great player. Pete Nance has potential to be a great player. The team is young, but they have potential in the next upcoming years as they start to get experience.”

The Wildcats still haven’t closed the deal with a single player in the 2021 class –– Northwestern is competing on the recruiting circuit with schools like Duke, North Carolina, Kansas and Michigan.

But at least the Wildcats are in the conversation. In February, Collins, assistant coach Brian James and athletic director Jim Phillips sat courtside to watch Baldwin Jr. play at Welsh-Ryan Arena. And the entire coaching staff attended one of Christie’s recent high school games.

The Wildcats are dreaming big, planning for their 2021 recruiting class to change the state of the program.

“It’s an honor to me for a coach like coach Collins to say that they’re really focusing on my class and that they really want someone like me or someone like Patrick to go there,” Christie said. “It’s obviously intriguing for me as a seventeen-year-old kid who wants to make a name for myself. For a college to tell me that they want me to make a really big impact at their school, that’s obviously intriguing to me.”