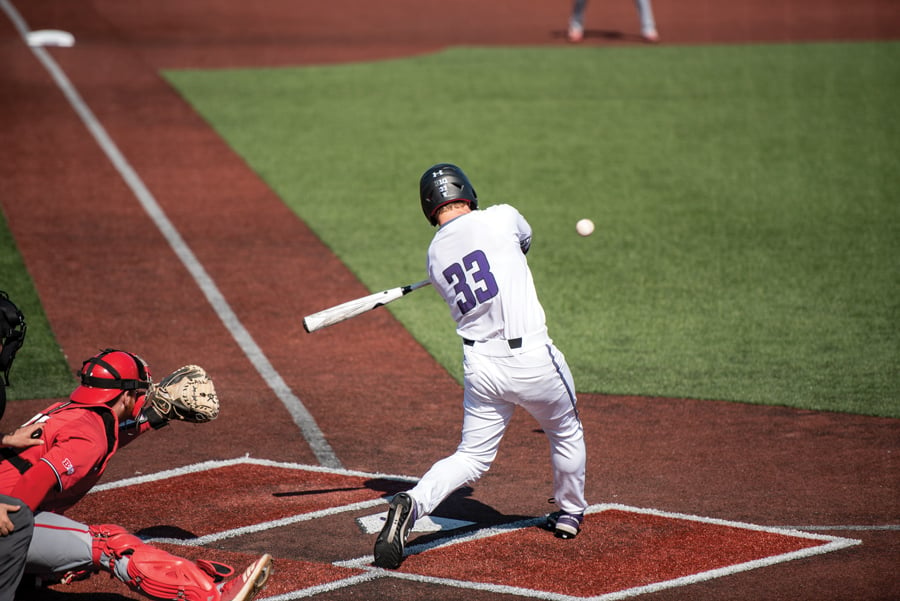 Casey O’Laughlin swings the bat. The junior outfielder hit a double this weekend.

Last year, Northwestern baseball opened its season in Mesa, Arizona, and the Wildcats lost two of their first three games.

This weekend, the Wildcats opened their season in Glendale, Arizona, and they lost two of their first three again. NU (1-2) lost its three game series against Omaha (2-1) but rallied to win Sunday’s finale 7-2.

NU got off to a promising start in Friday’s season opener, going up 3-1 in the 5th aftera two-run homer from sophomore catcher Michael Trautwein and five strong innings from sophomore pitcher Mike Doherty.

But the game unraveled in the 6th inning. Junior Jack Pagliarini hit the first batter he faced, and the next batter reached base on an error. Pagliarini gave up a run on a wild pitch before walking another batter and getting pulled from the game.

Senior Josh Levy relieved Pagliarini and also hit the first batter he faced, and then Levy then gave up a three-run double that put the Mavericks ahead for good. An RBI double by sophomore Shawn Goosenberg put the Cats within one in the 7th, but NU came up short, losing 5-4.

The narrative was similar in game two. The Cats took a 1-0 lead on a Trautwein double in the 4th but imploded defensively in the 5th. The first four batters all reached on errors, three of which involved senior Leo Kaplan, who was playing third base despite usually starting in the outfield.

Omaha capitalized on the errors, notching three straight hits and leaving the inning with a 6-1 lead. The Mavericks got three more runs on a base-clearing triple in the eighth, eventually winning 9-2.

Sunday’s game was a completely different story, as NU jumped ahead early and held on for a dominant win.

After scoring a run in the 3rd, the Cats capitalized in the fourth, scoring four runs after two Maverick errors and a three-run double by Goosenberg. NU scored six runs in the inning, going on to win 7-2 to salvage the series finale.

Sunday was the first career start and win for redshirt sophomore transfer Tyler Uberstine, who pitched five innings and gave up one run on four hits.

“He’s probably one of the guys I’m most excited to see,” Allen said of Uberstine. “The stuff is really, really good. He’s done a great job of leading in his own way.”

Offensively, the Cats were led by Goosenberg, who went 7-14 with five RBI on the weekend. Senior second baseman Charlie Maxwell also had a great start to the season, going 5-12.

This weekend NU will travel to South Carolina for a three-game series against the Gamecocks.

“I challenge the guys to make sure that they believe, that they know that they’re good,” Allen said. “There’s definitely a lot of talent on this team, and I’m just excited to get rolling.”