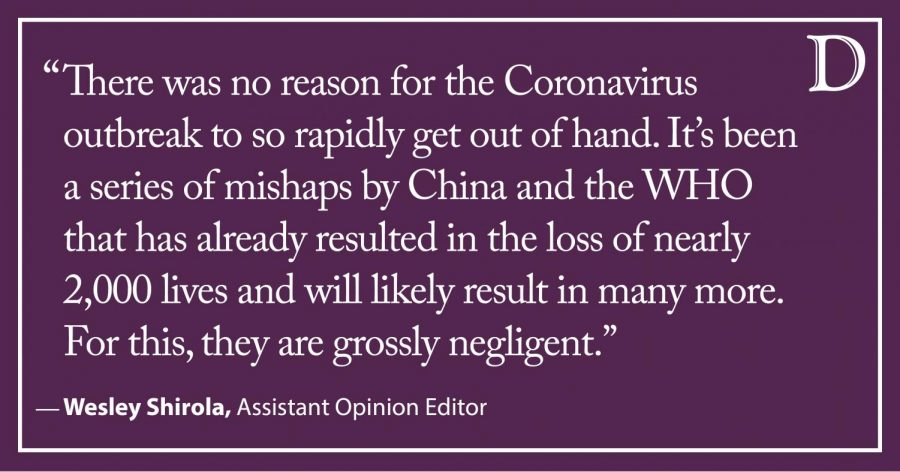 The world first became aware of a mysterious illness in China on the final day of 2019 when the nation alerted the World Health Organization of several flu-like cases in Wuhan, the capital of Central China’s Hubei province with a population of 11 million — over three times that of Chicago’s. The patients were quarantined, and authorities began searching for the source. On New Year’s Day, the U.S. Centers for Disease Control and Prevention identified a meat market in Wuhan as the likely epicenter of the illnesses. The market was promptly closed and remains so today. On Jan. 3, temperature screening was instituted for passengers at Wuhan airport.

Unsurprisingly, actions taken during the first days of any suspected outbreak are crucial in determining its course. China’s and the WHO’s initial responses appeared reasonable and adequate. But that’s as good as things would get.

Despite numerous additional cases, the WHO issued a statement advising countries against applying travel or trade restrictions with China on Jan. 5.

The cause of the infections was determined two days later on Jan. 7 when Chinese authorities identified a novel coronavirus as the culprit. Coronaviruses, which are named for the crown-like spikes that protrude from their surfaces, can cause infections ranging from the common cold to more serious diseases like Severe Acute Respiratory Syndrome, or SARS, which also originated in China, infecting thousands and killing almost 800 in 2003.

By Jan. 15 the Coronavirus had crossed China’s border into Thailand and Japan, infected over 40 people and claimed its first victim. Fast forward a month, and as of Monday, Coronavirus had infected more than 72,000 people across 27 countries and killed nearly 2,000. What happened in the intervening month was a series of fatal mistakes and outright negligence committed by China and the WHO.

It took the WHO over four weeks before finally declaring the outbreak an international health emergency on the final day of January. In making the announcement, WHO leaders once again urged countries not to restrict travel and trade to China, despite the fact that many had already shut down borders, implemented vast screening checkpoints and limited visas.

Why did it take so long to declare the outbreak a public health emergency of international concern, or PHEIC, and unleash the massive amounts of resources that WHO possesses? After all, by that point the death toll from the virus had touched 213, the total number of cases had increased to 9,776 and the virus had crossed borders. And, despite not being as deadly as similar viruses like SARS, it was still spreading rapidly and threatened to claim more lives — in China and abroad.

The WHO committee tasked with making the decision had the ability to do so just over a week earlier but chose not to, reportedly due to disagreements over the severity of the outbreak among committee members. Those opposed wanted to wait to see whether China’s own efforts to control the outbreak could prevent broader international transmission, and so the committee issued a report calling the global health risk from the virus “moderate.” Seemingly, the WHO had failed to learn its lesson from the SARS outbreak and instead chose to put thousands of lives in the hands of an authoritarian and communist government.

Astonishingly, the WHO had another opportunity to declare a PHEIC only days after their initial refusal. At this time the number of cases had more than doubled, but once again WHO officials chose not to declare one and instead revised their previous report now labeling the global risk as “high.”

It is impossible, of course, to know the precise impacts of these many displays of gross negligence committed by the WHO, but it doesn’t take a health expert to see the already vast impacts that the virus has had — not only in terms of infections and fatalities, but also in terms of the havoc it has wreaked on the global economy — and the even bigger impacts it will likely have in the coming weeks and months.

The WHO isn’t the only actor deserving blame for this massive crisis. In fact, China itself may be the most deserving. Throughout the course of the outbreak the Chinese government has been maintaining the narrative that local officials in Wuhan and other cities are to blame for allowing the epidemic to spiral out of control. The Financial Times reported Sunday, however, that Chinese president Xi Jinping knew of the virus almost two weeks earlier than previously thought, according to an account that appears to contradict the government’s current narrative.

The new account came over the weekend from the official Communist party magazine Qiushi which says that Xi met with China’s most powerful decision making body and gave instructions on the virus response on Jan. 7, 13 days before the public was officially warned about the severity of the outbreak.

Previous accounts from Chinese state media appeared to date Xi’s initial direct involvement to a statement issued on Jan. 20. If these new reports are true and Xi was in fact aware and in charge of the response to the virus nearly two weeks earlier, then Xi and the rest of the Chinese government may have knowingly instituted a massive coverup of the outbreak, interfering with early responses and contributing to its exponential spread across the globe.

As of Monday, the outbreak showed some signs of slowing but continues to make headlines on a daily basis. Current attention is focused on a cruise ship docked off the coast of Japan where passengers had been in isolation for nearly two weeks. Confusion abounded Monday as U.S. officials in the process of evacuating American passengers only then learned that some of the evacuees were infected.

In an age of vast healthcare knowledge and resources, there was no reason for the Coronavirus outbreak to so rapidly get out of hand. It’s been a series of mishaps by China and the WHO that has already resulted in the loss of nearly 2,000 lives and will likely result in many more. For this, they are grossly negligent. We can only hope that they — and others — will learn from these mistakes so that such an outbreak need never reach this scale again.

Wesley Shirola is a Weinberg junior. He can be contacted at [email protected] If you would like to respond publicly to this column, send a Letter to the Editor to [email protected] The views expressed in this piece do not necessarily reflect the views of all staff members of The Daily Northwestern.