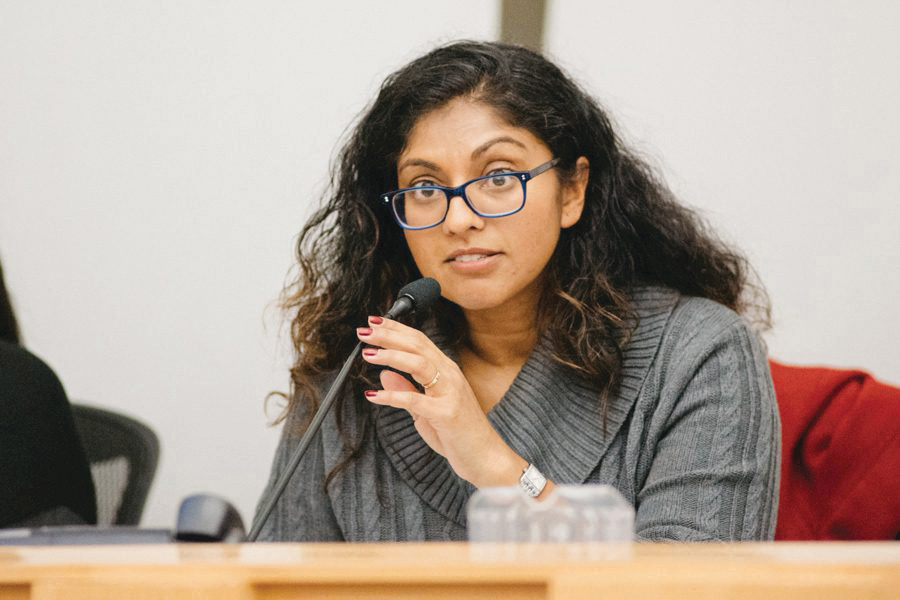 District 65 board president Suni Kartha. Kartha said school officials should consider the implications of the Achievement and Accountability Report on their own schools at January’s Evanston/Skokie District 65meeting.

For the first time ever, Evanston/Skokie District 65 created individual school profiles to complement the overall district 2018-2019 Achievement and Accountability Report. The report is 29 pages shorter than last year’s, and includes a greater amount of qualitative data.

The report outlined a decrease in kindergarten readiness tested through the Illinois Snapshot of Early Literacy (ISEL). The district’s kindergarten readiness metrics decreased to 49 percent from 56 percent in the 2017-2018 school year. Kindergarten readiness is determined by assessing a student’s skills in alphabet recognition, story listening, phonemic awareness, one-to-one matching and letter sounds. They are considered kindergarten-ready when they are at or above the 50th percentile for four out of five of these areas.

The district also saw a decrease in the percent of kindergarteners meeting benchmarks in the Developmental Reading Assessment, but increases in the percent of first, second and third graders meeting benchmarks. Overall, the percentage of students making expected gains on MAP testing lowered, dropping to 56 percent from 59 percent in English Language Arts and to 55 percent from 64 percent in Math.

Interim superintendent Phil Ehrhardt said he doesn’t see the data as “worrisome,” but rather as a tool for improvement.

“We ask the question of, ‘Why is that occurring?’” Ehrhardt said. “‘What are other practices that other schools might be using, that are successful, that we can adopt and adapt?’”

While the district did release some numerical statistics from the 2018-2019 school year, most of the report centers on qualitative data like individual school achievement. This data features student projects, educator accomplishments and new school initiatives throughout the district.

Last academic year, students worked on projects involving environmental issues, racial equity and advocacy. The district had 45 Nationally Board Certified Teachers. Educators at Willard Elementary helped create protocols for the Responding to Hateful Language and Discriminatory Acts, “which ultimately were adopted for district-wide use,” according to the report.

Office Discipline Referrals decreased by 55 percent at Oakton Elementary, which has also instituted school-wide mindfulness practices at the beginning of each day.

“What a better way to start the school day for the students,” Erhardt said. “Because they come from a variety of backgrounds, (from) what’s been going on at home, to come in there and kind of get everyone just to, for lack of a better word, chill out, is important.”

Kylie Klein, director of research, accountability and data, said at a September board meeting that the report changed this year partly in response to a survey conducted in the district last July. Klein said 66 percent of respondents agreed there should be changes to the report, including condensing the report’s length.

Respondents also said school-specific information in old reports was difficult to access. In the previous report, assessments by school were located in Appendix B, and included 11 data tables of specific-school data.

The most recent overall district report didn’t include school-specific statistics or side-by-side comparisons of each school’s data. The district created an individual report for each of the schools in the district to provide more specific data on each institution. Klein said the new format is “very family friendly” and a “reasonable length.”

While Klein said the quantitative evidence of student and district performance is critical, she said qualitative data in the overall district report emphasizes this year’s student, staff and community accomplishments through a more holistic lens.

The report also acknowledged persistent opportunity gaps “faced by marginalized groups due to institutional racism in the education system.”

Ehrhardt said the district is examining the curriculum’s rigor and relevance to try and narrow the achievement gap, which he said is a nationwide issue. He said the district strives to ensure that students learn challenging material they find interesting.

Klein had a similar response.

“We’re looking hard at our curriculum to make sure that the materials used in classrooms are authentic and engaging for students, and represent a diversity of cultural backgrounds and knowledge,” she said.

Ehrhardt said the report will also inform residents who don’t have any kids in the district’s schools.

“We have to be able to answer for our residents and our taxpayers, what is being done in the schools?” he said. “And how is my tax money really helping to build the quality of education, which for them is important because that’s going to have a direct impact on the value of their house,” he said.

In the coming years, Klein hopes to expand the report to include more student accomplishments and district participation, including attendance at school board meetings. She also said the district is currently translating the reports into Spanish, as well.