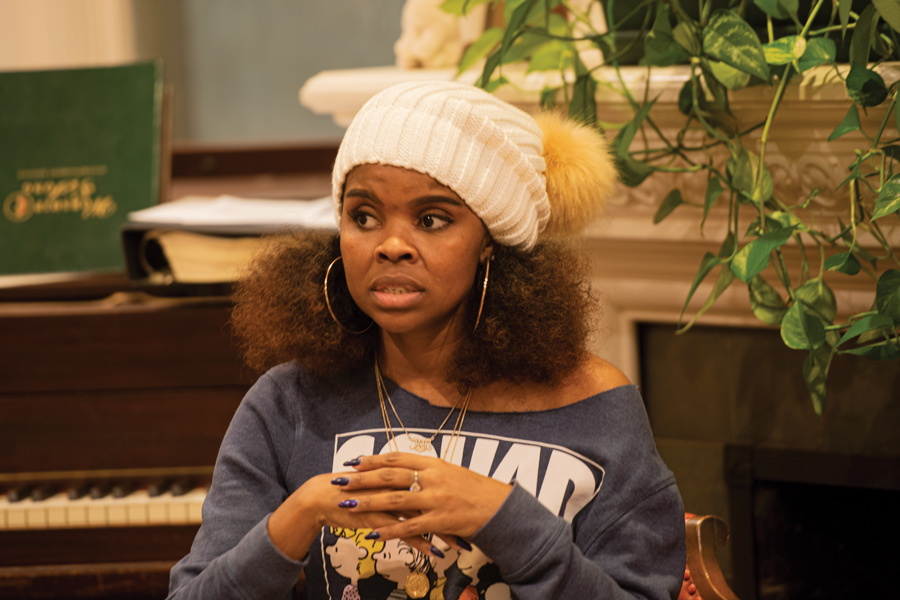 Tamar Manasseh speaks about her work for Mothers Against Senseless Killing at the University Christian Ministry. The mother of two works to prevent gun violence and rebuild her community.

Tamar Manasseh, founder of Mothers Against Senseless Killings and a rabbinical student, discussed her efforts to rebuild her community in Englewood through violence prevention Monday.

Manasseh spoke at an event in University Christian Ministry sponsored by Northwestern Hillel, the NU Leadership Development and Community Engagement Office and the Brady Campaign NU.

Established in 2015, Mothers Against Senseless Killings was created to foster community building and engagement on a block plagued by frequent gun violence. Manasseh said she was inspired to fight for her community because she “was just a mom that didn’t want to lose her kids.” She said she approaches gun violence prevention in a multi-faceted way, focusing on eliminating variables that contribute to gun violence like food insecurity by cooking food for her neighbors on her street corner of 75th Street and South Stewart Avenue.

Manasseh emphasized that her upbringing was influential in growing up to advocate for the survival and education of the children in her community. As a young black girl from Englewood attending a Jewish day school, she said she was educated about Jewish survival and values that the black communities of Chicago lacked.

“They Ain’t Ready For Me” is a feature-length documentary released last month that followed Manasseh for two years to capture her work combating gun violence in her neighborhood. She said attending a screening of the documentary gave her hope that it would mobilize audience members to engage in conversations and join the movement to rebuild communities in Chicago affected by gun violence.

Lydia Greenberg, Hillel’s social justice coordinator, said she was inspired to bring Manasseh to campus because she exemplifies the Jewish value of Tikkun Olam, or repairing the world. She said this event felt like the perfect opportunity to connect with the Justice Talks series because of Menasseh’s prominent social justice advocacy.

Val Buchanan, assistant director of leadership development and community engagement, said she is interested in bringing activists, organizers and community leaders to campus to make it more accessible for students to learn about how people are doing “inspiring” work in Chicago. The hope would be, she said, to have these conversations spur people to get more involved in community engagement work.

Buchanan said Manasseh is an example of someone living out her passions and finding a way to practically and tangibly apply her faith to make a difference on her block. She said Manasseh’s story of creating the world she wants to see for her kids is the kind of example that everyone can draw strength from.

“She is a wonderful example of someone who is living out her passions and finding a way to live out her faith and her values in very practical, tangible ways that are making a difference in the block,” Buchanan said.

– Everything Evanston: Reflecting on gun violence in the 8th Ward