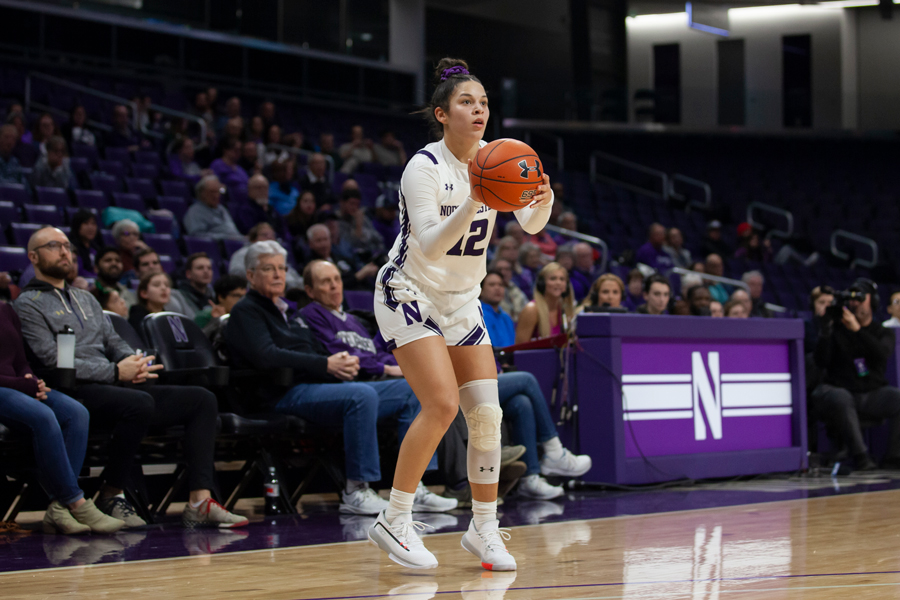 Veronica Burton holds the ball. The sophomore finished with a team-high 21 points in Sunday’s win over Nebraska.

For the majority of No. 19 Northwestern’s conference matchup against Nebraska, Lindsey Pulliam couldn’t make a shot. The junior guard struggled against the Cornhuskers’ aggressive defense and shot 0-for-12 from the field.

With 29 seconds left, Pulliam finally ended her shooting slump. With the game tied at 56, Pulliam received a pass in the paint from senior forward Abi Scheid, spun to her left and nailed a fadeaway jump-shot to the delight of a raucous Welsh-Ryan Arena crowd. At the foul line 24 seconds later, Pulliam sank two free throws to give the Wildcats (22-3, 12-2 Big Ten) a 60-56 comeback victory over the Cornhuskers (16-10, 6-9).

“(Pulliam) is the focal point,” coach Joe McKeown said. “With 50 seconds left, Nebraska called a timeout and she said ‘Coach, get me the ball.’ You know, I didn’t go to Northwestern, but I’m smart enough to get her the ball.”

Avenging last season’s home loss to Nebraska, NU’s win was orchestrated by sophomore guard Veronica Burton, who scored 21 points, grabbed three rebounds and was a perfect 9-for-9 from the free-throw line. The Massachusetts native made crucial plays throughout the game and sank the three-point shot that gave NU a 49-48 lead in the middle of the fourth quarter, the team’s first since the end of the opening quarter.

At the beginning of the first quarter, NU’s defense — ranked second in the Big Ten — looked overwhelmed as Nebraska raced out on an early 6-0 run. To counter the Cornhuskers, McKeown subbed out starting sophomore guard Sydney Wood for junior guard Jordan Hamilton, who helped NU take a 16-15 lead after ten minutes.

But less than a minute into the second, the Cats lost their advantage as Cornhusker forward Ashtyn Veerbeek nailed a three-point shot. Nebraska, who went into halftime up 33-29, controlled the quarter as the team forced two NU turnovers and shot 57.1 percent from the field.

At the beginning of the third quarter, a loss by the Cats seemed very possible, as the team shot 0-for-6 from the field and Nebraska went on a five-point run to take a nine-point lead.

But two minutes later, Burton took the ball from the Cornhuskers’ Nicea Eliely, raced down the court and completed an and-one layup sequence. This play sparked a 10-6 run for the Cats that saw the sophomore score seven straight points — including two free throws after a technical foul by Nebraska junior Kate Cain– as NU cut the Cornhuskers’ lead to two at the end of the quarter.

In the fourth, the two Big Ten squads traded baskets until Burton’s three ended the Cats’ deficit. The Cornhuskers took a 54-49 lead after a 6-0 run, but a huge corner 3-pointer from Hamilton tied the game at 56 with under two minutes left. A little more than a minute later, Pulliam drained her go-ahead shot and Hamilton — who took a charge with under five seconds left — allowed Pulliam to seal a Cats win and a 9-0 run at the foul line.

NU played against Nebraska in pink jerseys to raise breast cancer awareness and in honor of Kay Yow, the former coach of NC State who passed away from the disease in 2009. McKeown spoke highly of Yow, calling her “a great friend of mine.”

With Rutgers coming to Evanston on Wednesday, Scheid said the Cats must look past their early mistakes against Nebraska so the team can focus on winning the final stretch of Big Ten contests.

“I was telling my teammates this (win) was like last year, where we’d always take the lead in the last five minutes,” Scheid said. “But a win’s a win and we’re happy with it.”