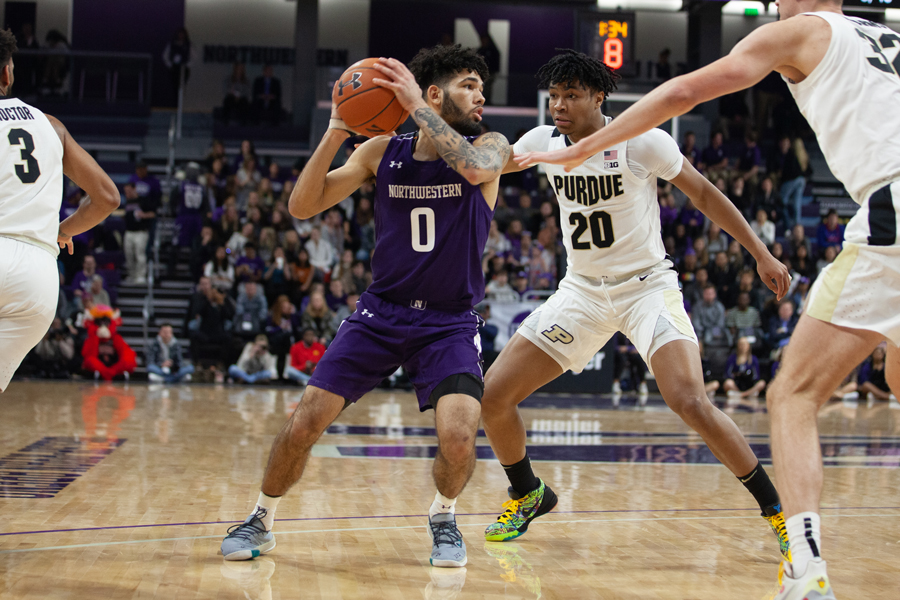 Boo Buie looks to make a pass. The freshman finished with 12 points in NU’s loss to Penn State on Saturday.

Last February, Penn State was the last-place team in the Big Ten when it showed up at Welsh-Ryan Arena. The Nittany Lions hadn’t won a conference game yet, but then they beat the Wildcats by seven points, and the postgame celebration was so loud in Penn State’s locker room that the team was asked to quiet down.

Since that night, the Nittany Lions have won 16 of their last 24 Big Ten games. In that same time span, NU has won just twice in Big Ten play.

“We knew they had a physicality advantage on us,” coach Chris Collins said. “There’s a reason why they’re 20-5. They’re an experienced, well-coached basketball team.”

Penn State entered the afternoon on a seven-game win streak and in second place in the Big Ten. But sophomore forward Miller Kopp led the Cats out to an early four-point lead.

After Kopp picked up his second foul and checked out of the game, NU never recovered. The Nittany Lions went on a 17-6 run in the first half to pull away. Penn State made seven 3-point shots before the break to finish the first half with 42 points.

Despite trailing by 17 points early in the second half, the Cats cut the deficit down to 7 with five minutes remaining. Freshman guard Boo Buie had 4 points and an assist to lead the Cats on a 9-1 run in the second half, but a made 3-point shot from Penn State guard Myles Dread brought the lead back to double-digits.

The Nittany Lions extended their lead to 20 points in the last two minutes and handed NU its ninth consecutive loss.

“They’re playing great basketball and clicking on all cylinders,” Collins said. “We knew what we were going to be up against today against a team as hot as anybody in the conference. But our guys kept playing. We found a way to claw back to seven, and then Dread hit a big three. They were able to execute down the stretch.”

But that wasn’t enough to keep up with Big Ten Player of the Year contender Lamar Stevens, who scored a game-high 23 points. Penn State coach Pat Chambers said he expected the Cats to keep the score close in the second half and make a late run, as they had in several conference games this season.

He credited Stevens for stopping it and leading the Nittany Lions to an important win.